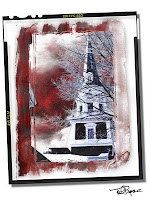 <- Click Here
It lays there against the sky... Or possibly it pokes into it. Or maybe it's stretching, grasping, tickling, tasting... sky. Whatever it's doing up there, it gets noticed. It grabs your eye during the light hours, and your ear with its bells at night. And it's drawn that attention for about a century. Especially from almost anyone who's put color onto canvas here in Lancaster. So, it apparently has a need to be a part of the work of creative-types who are working at describing this city. And since that's me, okay, here's my busy take on the busy First Presbyterian steeple.

The thing is, while this illio describes a memory of the tower, it doesn't plug it into the culture. And since it's up there, and the culture's down here... maybe the idea it represents is a tad lofty with respect to the appetites that need to be fed. Of course, there's usually more sky space in cities than there is street space. Which might explain why it is parked up there, instead of down here. It's there perhaps, not because that's where it's needed, but because someone was able to put it there. Which explains a lot about things that happen, no?
Posted by Ted at 6:54 PM