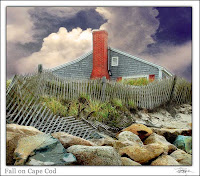 <-Click Here
If you've lived in much of the Northeastern part of the United States, it's known by just those two words.
"Hey, where y'going?"
"The Cape."
"Ahhhhhh..."

Then you'll get questions like: Ocean or bay? How far out? What part? Or from those who love it... "Where 'bouts?"

We're going about half way out on the Bay side. That's where I took this snapshot last year in the Fall. The color could be nice next week, but it doesn't much matter. In a lot of ways, even the weather doesn't matter a lot. Oh, it'll be cool to see them harvesting cranberries (I don't think I missed that). And the beaches will be nicely empty now that the kids are back in school. And you know what? For miles and miles, whether you look out at the water, or in at the shore... the view will be the same one that my parents and grandparents saw. See that house up there. I could snatch you from anywhere in the world, whip off your blindfold and one look at it and you'd figure where you were.