Drive south along Interstate I95 and leave North Carolina. Within a quarter of a mile South of the Border appears on your left. It's a sprawling tourist trap filled with clip-joint shops, restaurants, a gas station, and assorted tourist attractions - including a large public toilet. It presents you with a battle between ticky and tacky, with tacky ahead by a nose. 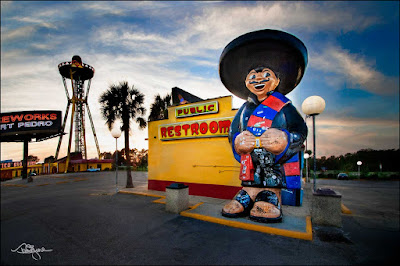 The motif is sort of stereotypical Mexican... as imagined by people who don't seem to like Mexico all that much. Now I'm not a believer in the concept of La Raza. Most Latin Americans that I've met have as much European blood as me. However they are as ethnically different from my Irish ancestors as Serbo-Croatians. There is a Latin culture that's taken on unique national characteristics as you travel from nation to nation. What ties them together is Spanish.


However, ethnic cultures always seem to clash - and those clashes produce some hot sparks, even fires - right? Last week, a television news lady was fired from her network job on NBC for having a discussion which seemed to license black-face halloween costumes. Which brings me to South of the Border in South Carolina.

Here's that Pedro public toilet. So? Is "Pedro" not as ethnically insensitive as black-face costumes? The place has been around for decades -  perhaps half a century. Its designers probably consider the motif to be fun. Moreover it's thousands of miles away from the Mexican border. But... have definitions of humor changed drastically enough over the last couple of decades to pop the place's humor balloon? Is South  of the Border a racist (or at least an ethnic) dog-whistle?

My friend Andreas generously gave me an entire day of his time last Fall to tour his city. It was a gorgeous, if hot, walk through the capital of European art and music history. Nowhere has  contributed more to Western thought and culture. Imagine, I had a personal guide to wander the ancient city's streets. And what a guide. Many of you visit Andreas' site where he's uploaded a stunning image daily for what? 12 years? More? If you've not grazed his work.. go on over to:  https://blog.andreas-manessinger.info.

Of course with only one day to "do" Vienna - I was overwhelmed. But Andreas took me through the streets,  subways, river banks, pubs, restaurants, and historic sites that I'd never have found on my own. We even had time to relax for an hour in the university's quadrangle to sit and talk about this moment in world-time.

This was our second chance at a photo-shoot together. Our first came when we met in Florence, Italy in 2007. Odd thing about Andreas... he doesn't age! It must be something in the Austrian water. On the streets, Austrians are handsome and intelligent people - Perhaps they hide plain and ugly folks? Nah... :-)