Time exists so that
Everything doesn't
Seem to happen at
Once.

In Rome I noticed that different things seem to change by different clocks. Change needs time, but time is an oddly capricious engine. I wonder though if that big... big... window, unlike the nail-chewing lad, has figured out how to waste its time? Hmmm.... maybe that's what makes us different from everything else that exists?

Took this in Rome with my Canon 20 at about 20mm and processed it with PS4, Topaz, Alien Skin's SnapArt: oil paint. The brushes and texture screens are customized for this image.
Posted by Ted at 3:30 PM No comments:

What I Did At Spring Camp... 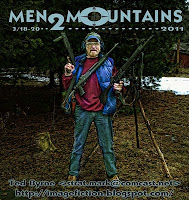 <- Click here
This image of me is sort of for my buddy Andreas Manessinger since he and I have this slightly, um, different conclusion about America's Second Amendment.

I was invited by my friend Chris to attend the annual Men2Mountains at his private hunting lodge and compound up in Potter County, Pennsylvania last weekend. The place is about a 5 hour drive over sometimes primitive roads into the north-central Pennsylvania mountains. There's still a carpet of snow in the shadows.And it snow showered on Saturday. There were eleven of us ranging in age from two Eagle Scouts who are 14 and 15 to the patriarch who's 85.

And then there were the toys. First off the weaponry was all handheld. Unlike my friend Charlie Smithgall's cannon/mortar/gattling gun shoot... What we used up in M2M were long guns and pistols. Each of the men are expert in their own weapons and careful instructors for those who lack that knowledge. And while it was explosive fun... the four ranges were carefully worked out for safety.

Two of the guys are trained chefs. You can imagine the food that eleven mountain men brought along.

I said four ranges. One was for shotgun clay shooting. Another was some 350 yards up a steep hillside for long guns. Finally there were two pistol targets: one for close self defense (10-12') and the other for handgun target shooting at around 30'.

While someone did bring a breech loader no one used it. But there were a ton of cartridge antique weapons that you rarely see much less get a chance to fire. I brought my own .38 cal Smith & Wesson Model 6. Yeah, I have a concealed carry permit like most PA gun owners. That's my gun on my hip in the picture up there, the others I picked up from ground coverings where dozens of single and double action weapons sat waiting to be used.

In America virtually no one lives behind the security screens that adorn most windows in Europe and much of the rest of the world. But I guess the understanding that so many folks have their own weapons does tend to discourage a lot of bad guys from breaking and entry, huh?

So... when I write that I was away at a weekend shoot... Well, maybe it has a different meaning to a bunch of photographers, huh? BTW... I am NOT a hunter. Bambi's and Thumper are safe from me :-)

Last point... Was all of this manly? Wuff! You can smell the testosterone farther than gunpowder. I came home with a real-man swagger and my voice an octave lower. Okay... gotta go now and chew some nails....
Posted by Ted at 7:00 PM 3 comments: 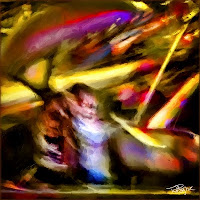 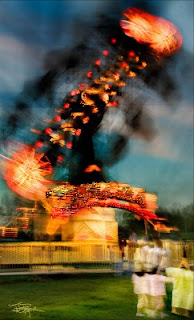 <- Click here
Something whippéd
Comes This Way.
Part of a small city carney series I'm slowly working upon.
Lancaster, PA
Canon 40D, 10mm.
PP: PS4/Topaz/AlienSkin: Bokeh2, SnapArt: Water Color, Custom filters/textures/brushes.
Some may recall this posted here before the Bad Apple (see explanation on the sidebar to the right) snapped it away.
Posted by Ted at 5:37 PM No comments: 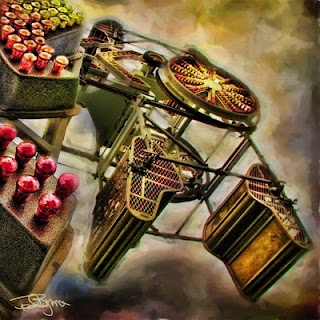 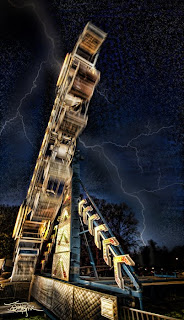 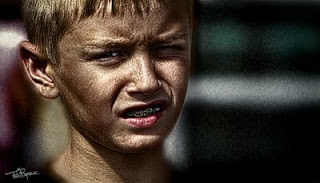