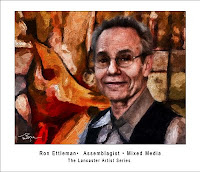 Some time ago Apple pulled the plug on its original gallery page in Mac.Com. In fact it pulled the plug on Mac.Com replacing it with MobileMe. The images which I posted on Mac.Com are still there but are forever fixed - I cannot add to them or rearrange them in any way. I think I can take them down one time, or close the folders out completely. But the gave us a lot of warning so I arranged them a last time and that ship will sail as long as Apple keeps it bobbing - but it will be a ghost ship, never changing.

At any rate, there's a new option to post galleries on Mac.Me... which I'm slowly exploiting and at some point I'll post the URL. One of the new options will be a gallery of portraits of Lancaster artists... And my friend Ron Ettleman is the first in that series. That's one of his larger works which determined the palette and mood for this work.
Posted by Ted at 7:44 PM 4 comments:

<-Click here
Some people collect stamps. The Landis Valley Museum collects buildings. They pluck them from the past and set them off in their fields to capture the aura of centuries of mystery. It's one of Pennsylvania's least known museums... and it's just around the corner from my gym. Lancaster County's littered with intriguing feelings.
Posted by Ted at 5:25 PM 5 comments:

Hmmm... Is there a difference between discovery and creativity in art? Lemme try that differently. Is it all about process or maybe its more about concept? Okay... okay... still not clear, right? Sigh. When Michelangelo decided to pull 'David' out of that enormous hunk of stone... well, how much did he know before he began hammering? Had he imagined the boy/man and then dug him free from the marble? Or did he find him as he chiseled away pieces of rock?

I started this concept out by watching a man on West Chestnut Street in downtown Lancaster. And I used my EF 70-300mm f/4-5.6 IS USM Lens to snag him free of the crowd. Then I went to work in PS/CS4 to reveal his character which originally attracted my lens - by building up tonal maps that let me dig into shadows and highlights. But as he emerged on my digital palette he demanded a setting. A moment... Yeah, his presence was the concept but the process wanted a place to both compliment and amplify it.

And I thought of the rugged coasts of Northern California where the yellows of the hillsides complimented the yellow of the guy's shirt. And then... then... a palette of yellows and blues all seemed exactly correct - perfect to balance the way that the coastline seemed too romantic for this portrait. So... so... process led to discovery. And where does creativity come to visit? Maybe that's a judgement for the visitor to make? Maybe we cannot conclude we are creative, merely presenters or discoverers... eh?

A FOOTNOTE: I built this image yesterday but before writing this tiny essay I rode my bike through Musser Park, next to my home here in Lancaster. And there on a gorgeous Sunday were two young painters from the Pennsylvania College of Art And Design each working in palettes of blues and yellows. While we each discovered very different images, I wonder. Is there a yellow/blue something in the air here in the Historic District? Cool.

Here's an image of the coastline which is really the result of three virgin images stitched together into a pano in Photoshop, which were taken with my Canon 20D through its EF-S 10-22mm (f3.5-4.5) at approximately the same time as mu subject on an equally sunny day.
Posted by Ted at 2:50 PM 4 comments: 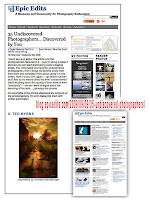 YIPPEEE! After half a century of doing photographic-visual art ---- DISCOVERED! ME! Lovvit!

Not enough exclamation points left in my quiver. Sorry. But it is very cool to be included among the world's top 35 Undiscovered Photographers. Thanks to Andreas Manessinger for bringing my work to the attention of the judges at the popular EpicEdits Forum. 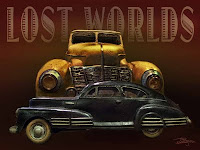 <- Click here
For a little while yet, there are those who can mount expeditions to the golden age … which will exist until their memories don’t. When time will not check wither… nostalgia can try.
Posted by Ted at 11:48 AM 2 comments:

Happy Anniversary To Me • Ta-Da

<- Click here
It was on 2006.... September 10 that I did this thing for the first time.... with these guys. You know what, I'm learning all of the time and my work's grown a lot in the past three years of posting, experimenting and experiencing your public and private feedback. Thanks so much to the many thousands of you who visit this site with support and reinforcement. I have a so many more friends as a result of all of this, and you know what? That's the real legacy and wonder of what we can do today.

<- Cick here
Am watching President Obama tell America why one seventh of the economy needs to be taken-over by the government. Why $500 billion of the payment for the take-over must come from senior citizen care. He explained that he can find this amount in wastage. I've heard government explain how it was going to pay for so much through increased efficiencies. It's not ever happened in my lifetime, so I'm skeptical that this $500 billion will come from waste.

The thing is that policy makers must choose between access and quality unless they can find large amounts of additional health care dollars. If 46 million additional people will lay claims against the existing amount of health care resources, then someone will have to determine who gets what. That rationing... if not done by price... will be done by panels. And if the amount available is specifically reduced by $500 bilion to senior citizens who use the most health care... then those panels will disproportionately ration health care away from the needs of the elderly. Death panels?

Last time the President spoke he promised that government control of health care would decrease costs... tonight he promises us budget neutrality. That means no cost increases. What's next?

There's nothing I can do about any of this. As an economist, I'm terrified. I am going to go and buy a bunch of gold since the first victim of all of this will have to be the dollar. And ... and... As I watch and worry... I'm doing pictures as distractive therapy. And it seems as if the face of youth... who will get the bills for all of this... resonates most strongly with me.

There will be a wave of fury whipping across the land tomorrow. No two waves. They will collide. I hate this.

<- Click here
Hmmm.... at first I just wanted to show my buddy Andreas Manessinger what he'd miss by postponing his US trip. We drove over to the Wellwood in Charlestown. That's in Maryland and the light you see reflected in the pitcher's flashing off of the Chesapeake Bay. Which is also wafting breezes across my half dozen bluepoint #1s. The pitcher was filled with Blue Moon, and would be soon again. It was about 5:30 on the deck and the sun was just starting to grow heavily golden over the water.

That's Bay Seasoning encrusted on the shells which is a salty/peppery mix. That explains the beer, huh?

But anyway... I got to wondering about this fantasy and thought to myself.... "Self. Why don't you see how cool this still life would feel all dressed up in oils?" So, well .... look at this wonderful mixed media.... Can't you smell the crabby steam that's shimmering upward? Which makes me wonder... which image works best? Thoughts? 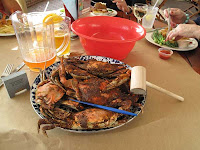 About the thoughts? Here's some geek stuff for you. Pre Processing: captured by my Canon G10 in natural light at the Wellwood Restaurant in Charlestown, MD right beside the Chesapeake Bay. Post Processing:Well as you can see by this virgin image taken from my FlashCard... in the first image above, I did some cropping and enhanced the dynamic range with some intense tone mapping in CS4 with the juice-kicking power of TOPAZ (love those tools) which also allowed me to add lights and spot the blue points and beer with some drama. Oh yeah, there' s just a touch of AlienSkin's Bokeh filter around the edges to obscure some distractions. You thinkthis recipe works?

Then... then... in the second image I worked in AlienSkin's SnapArt2 with a medium brush in portrait.... later masking away the oil effect to spot the crabs. I can see either of these blown large on the wall of a restaurant.... lit with one lamp from above on an otherwise dark paneling. How elegant is that? Huh? 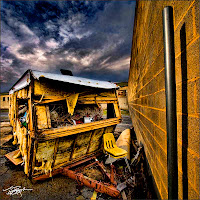 Where do you go when every place else has tossed you out?