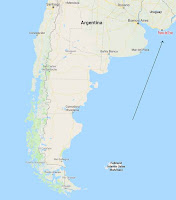 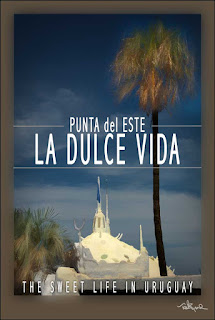 What’s the difference between seeing and noticing? Does one go to the machinery of logic, the other to the place where imagination churns? Maybe our senses send signals both ways at once? Do we escape into details to avoid over-heating our cerebral processors? Or maybe we both notice AND see details to collect as many as possible for logic and imaginations to process later?

I like to troll scenes with a camera so that the heavy lifting of collecting analytical fodder can fill up memory cards with facts while allowing me distill out whatever truth they contain at leisure. Yeah, that’s it… that’s why I postpone conclusions until I can swim around in snapshot images like Scrooge McDuck in his money crammed pool.

Punta Del Este's a playground for South America's (and Europe's) successful. This summer-time city's golf-course-like-feellng boasts lawns better manicured than the work of a Parisian nail studio. As a Yank, I noticed a beach-front two-story photo of Donald Trump Jr. boasting the erection of a Trump Tower filling with luxury apartments. In this Spanish-speaking place it was hard to miss that the building’s advertising was in English.

A tour-taxi drove us through acres of the sort of mansions that line the roads of Palm Beach, Greenwich, CT. and Beverly Hills. The city's often compared to Cannes. Perhaps tacky’s been outlawed by Punta del Este where homes sit upon multi-acre hillsides of green, most with spectacular water-views.


The air’s scented with gold.
Has this city of 9,200 (swelling to  perhaps 30,000 in summer) overcome or simply banned poverty? After hours of touring, we spotted NO low-income housing. Mercedes seem driven by the middle classes while the coolest youth drive Lambos as parents are chauffeured  about in Bentleys and Rolls. Until those streets, I'd never seen Bugattis in the wild.


So? Here's what puzzled me since our visit to the city. Why are struggling Latinos streaming north to the U.S. when La Dolce Vida glimmers in Punta del Este (along with Chilé and Argentina)? Es desconcertante, eh? Thoughts anyone?