A Shadow of the Ancient Ways: Paris 6

It was 1887 when the French erected this huge relic from the edge of the iron age. Maybe that will save it in this moment of statue and history smashing? Cultural churning's sparked a fashion for ripping stuff down. History's got veins of bad... so it's the 2020 fashion to rubble-ize all of it.

But the Eiffel's neither a triumphal arch, nor a tyrannical warrior on horseback. Maybe the mob'll pass it by? Uh, well not so fast. The 19th century wasn't France's best. And it was ending after the Germans had smashed their armies leaving them with gaunt borders and, until 1871, the Prussian occupation of Paris. They needed what some called a tiara-of-accomplishment as 1800s sand tumbled to its hourglass's bottom.

So a scant decade later, Gustave Eiffel built his tower as a Freudian-wand to re-engorge French pride. Which makes it the greatest historic monument to nationalism. Gustave himself called his tower a "300 meter flagpole." Uh-oh, will that ignite internationalists'-history-looting blowtorches? After all, they've declared that nationalism is definitionally about racism. Especially in Europe where - unlike the Americas, Australia, and New Zealand -  national borders were set to exclude diversity.

Mobs are usually lazy with short attention spans. It'll probably take more determination than they've got to pull this gigantic gadget down: unless their backers can implant a correct load of explosives under each of its footings. Hmmmm... Can you imagine shadowy rooms of black-clad,  Guy Fawkes mask-muffled plotters?

I've worried before about the future of the future, especially since tens of thousands are toppling history's past.

Is There A Future for the Past? 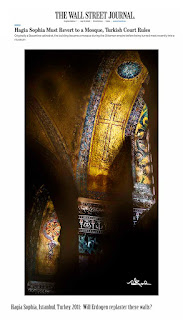 Is my Hagia Sophia picture-portfolio's value about to spike?  Dunno... Got a ton of haunting pix from inside the Hagia Sophia's de-plastered walls. The ancient Christian paintings are moving. However Koran's not supportive of images of most kinds within the walls of mosques. Sooooo....

Are we witnessing the collapse of the frame of a fragile world? As Hitler demonstrated, crisis presents opportunities, and I suspect there's a vacuum of consensus concerning historic preservation, certainly that seems to be the case here in the US.

"Is there a future for the past?" Sorry I cannot recall who wrote that, it's just stuck in my mind, like one of those tunes that won't stop playing. Y'know? Istanbul's a nagging example of the adage that every great success is built upon unstable and painful rubble, huh?

Beneath every Rome lies a Carthage, Athens, and Dixie.
P.S. Just as it's piquing me to wonder if there is a future for the past? Um, whuddabout the vice versa? Hmmm... Or izzat the same thing? Or... I'm off to quietly have a head explosion. Aaargh!