Our brains really don't come empty. Millions of evolutionary years have wired in some instincts - which are sort of neuro-rules. Apparently ancient ancestors who were best able to make sense of a given moment, were more likely to live long enough to pass along an instinctual track in their babies' minds.I'm guessing that it fueled our ability to spot the tiger in the bushes, or the villain unsheathing his knife.

Anyway, what happens when there's really no order in what appears to be a simple moment? Granada's Baroque Carthusian monastery's like that. Its pieces won't fit together without some sort of key. But where is it? How to explain this happy couple, the dead clown and relatively ancient holes poked into walls - and an eye-fooling altar setting that's actually a painting? In fact, while the doorway steps there on the right are 'real', that alcove to the right of the painted altar piece was also, I think, painted to wickedly deceive the mind.

So is there order among the couple and the tryptic behind them? Can your mind assemble the pattern, the order, the moment's reason and therefore its meaning? Or is this really a surrealist's romp? One thing's certain... Blown up to 7' on the horizontal edge - Here's an image that will ask everyone its questions each and every time they enter the room it dominates. 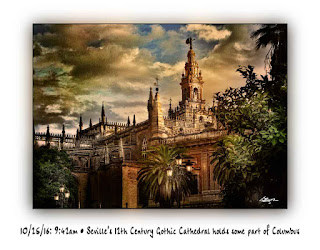 After he died a pauper, the monarchy resurrected Columbus as a hero. Cities competed... and still do... over claims to be the explorer's resting place. While the Spanish claimed his body rested here in Seville's magnificent cathedral no one had the courage to test the remains until a few years ago. DNA examination concluded that there were some milligrams of Columbus's corpse in here. Just which of his parts isn't made clear. Where's the rest? Maybe in Central America - who knows? 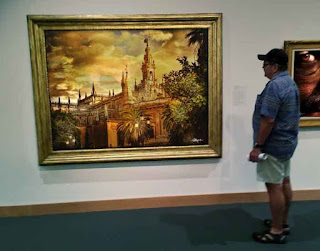 My image belongs on a museum wall, y'think?