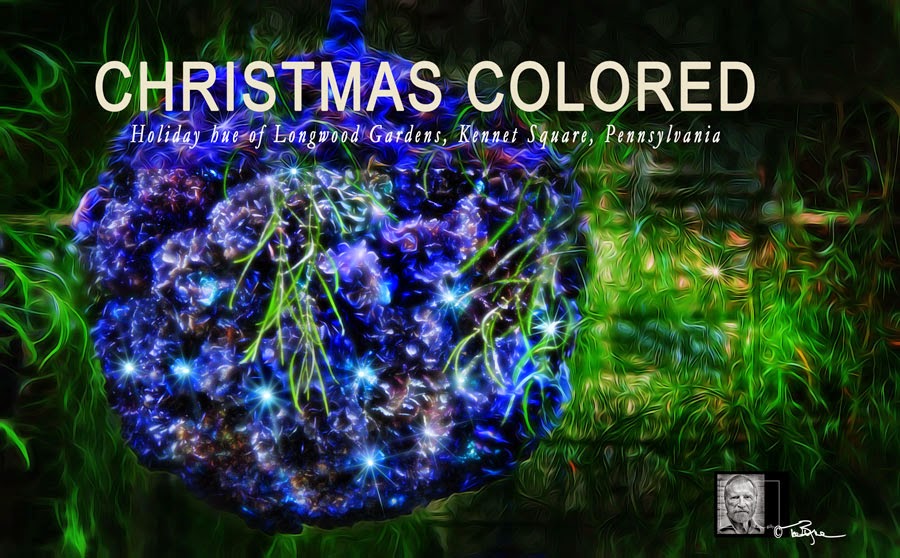 Once upon a time... it was December 12th and A Longwood Christmas 2014 was underway when Rita and I joined Marty and Gib Armstrong for the 45 minute ride down to Kennet Square in Chester County. Some of you don’t know about these 1,077 acres of gardens, woodlands and meadows where the Dupont Family (Yes, that duPont family) created what might be the world’s premier botanical gardens in Brandywine Creek Valley.
A disclaimer: While I’ll glue some images together with a narrative in this post, it’s a hard fact that discussing the mystery of flowers is more difficult than describing the shape of mist. I find that the stuff of Longwood Gardens goes through my mind directly to my feelings without ever passing through words.
Maybe three or four times a year we try to visit Longwood Gardens. Their Christmas display is a magical explosion of color that’s a magnet to a fine art photographer’s lens. Floral inspiration comes from plagiarizing what nature’s created. So  in a effort to  find my voice this year, I decided not to just take photographic dictation from the flowers. But still, for those who either missed it this time, or for you folks way far away from here, all around the world… well I’ve attempted to let the show communicate the idea of Christmas Colored. Make sense?
REMEMBER SPRING? 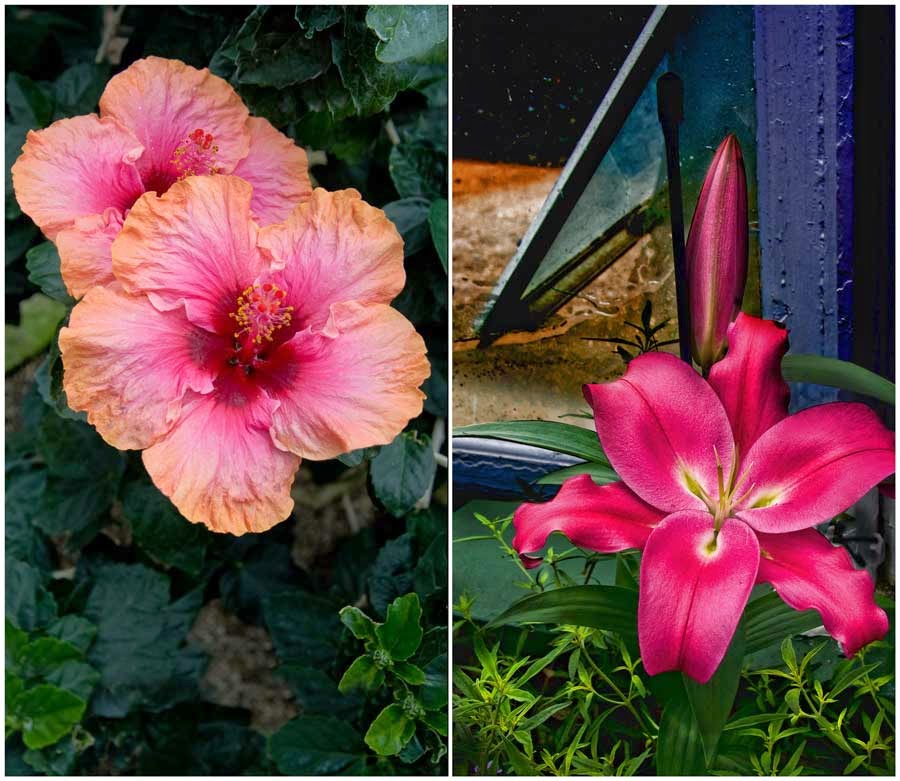 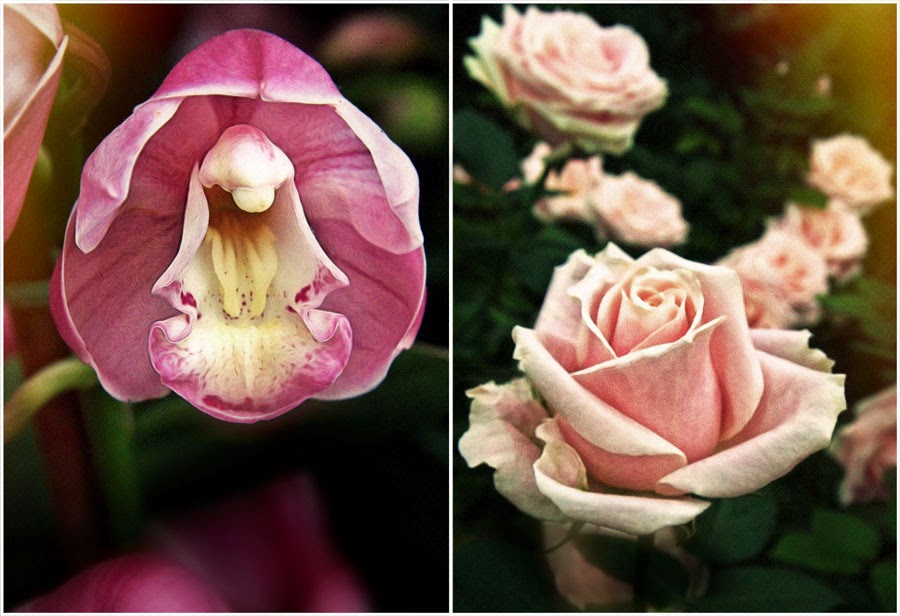 Within their glass bubble, the curators of Longwood have stuffed a dense luxury of star dust… Their trails contradict the wintry outside ice to trigger feelings of seasons past or coming. They do it with polychrome sparks along trails leading off into humid tropics, arid desert, and among lushly weird exotica from every continent and most islands. 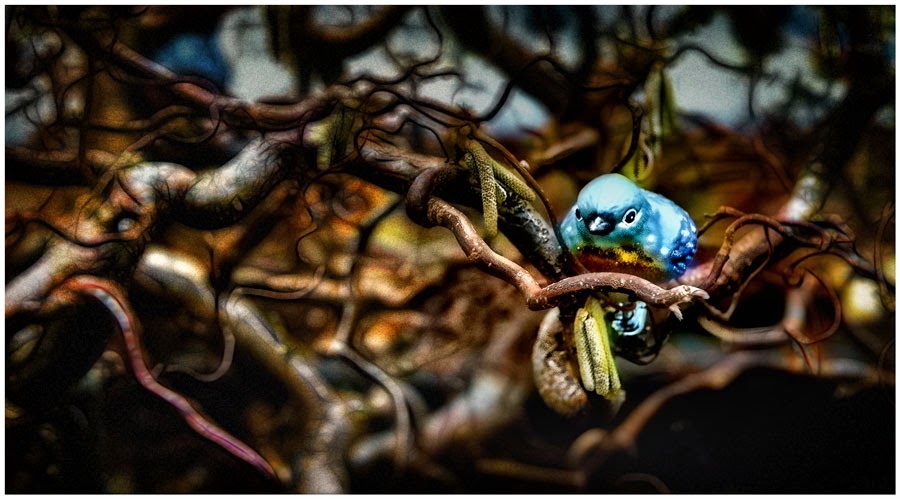 So this Christmas, instead of trying to document their enormous show I hunted just for the accessories which set off the elusive feeling of A Christmas Colored. You know: examine trees instead of forrest? Like this tiny glass bird nestled maybe ten or twelve feet up there among vines hugging a strange tree? Is that breadfruit? And does this shiny little guy evoke a fragment of lost holidays you captured somewhere a long time back? 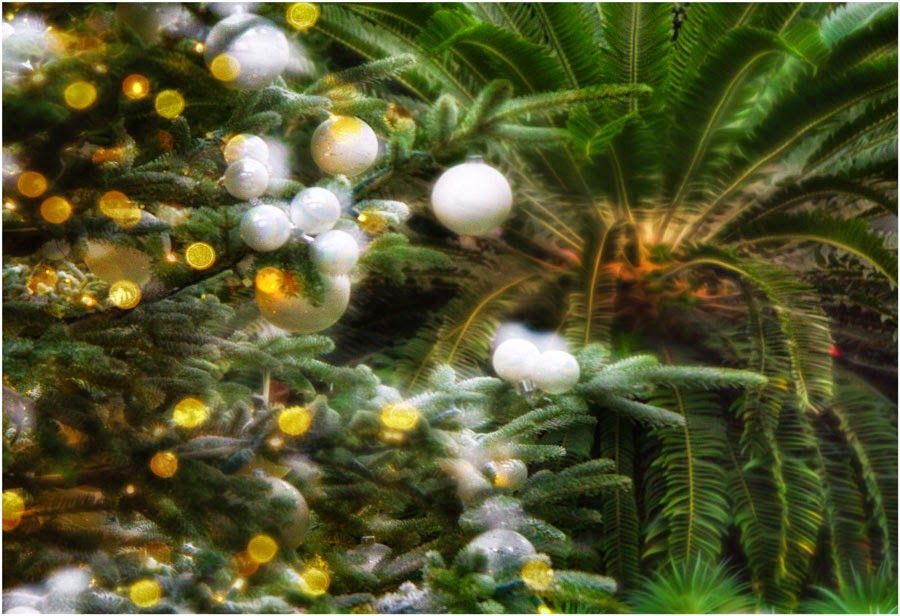 The photographer Brooks Jensen’s written, “Picturing flowers is too easy, like clubbing baby seals.” But capturing their conclusions… now that’s a challenge. So that’s what I hunted in those four and half acres of heated greenhouses joined together by lush corridors of plants and meandering brooks burbling with ebony water. On a near bank I found a Scotch pine hung with lights and snowballs while on the far bank a giant palm was back-lit with orange-golden spots. Do photographs lie? Is there such a thing as non-fiction in any media? What images do is reflect the photographer’s life-view. The more interesting question is whether there is a gap between their creator’s narrative and reality.
A sign announced that there are over 5,500 plants in the 20 indoor Longwood gardens cut with half a mile of trails. They’ve begun a forty-year expansion overseen by the Dutch landscape architecture and urban planning firm, West 8. And already the efforts have won international awards… Including one for this…
WASTING AWAY 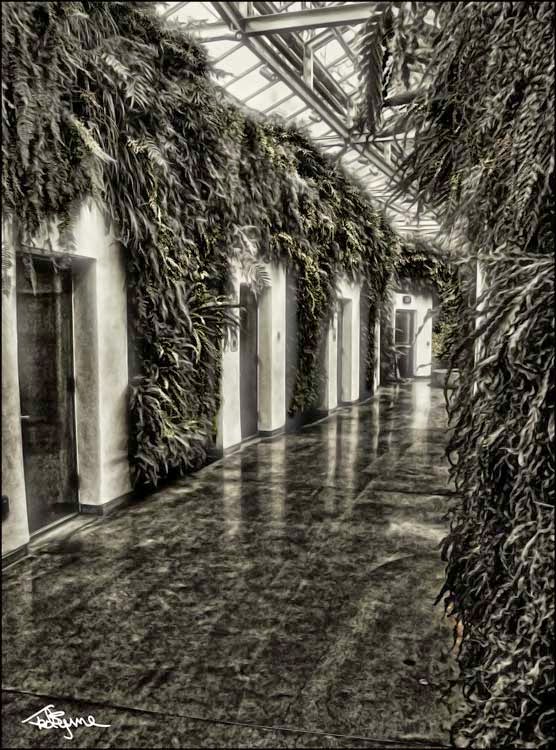 There was a cheery docent at the main entrance. “Down there’s an award winner," she pointed us to a corridor that led to this row of doorways. Want to guess what’s behind them? These are toilets! Uh-huh. They look like mausoleum doors, don’t you think? And for what is that a metaphor? But who knows what Dutch WCs look like? Um, wait a minute, I was in Holland recently. Didn’t see anything like this though. Hmmm… Maybe I spent too much time wandering their notorious Red Light District?
ON TO THE MANSION 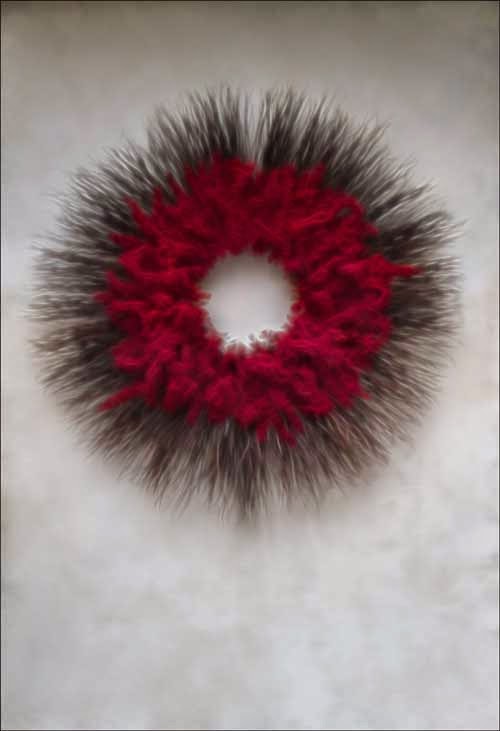 In 1906 Pierre du Pont, the industrialist, bought this property as his private estate and today his mansion which is also part of the Longwood Gardens Foundation sits about a hundred yards from the sprawling crystal greenhouse. Also open to the public, that home’s built around a two story atrium where this graceful wreath whispers its early 20th century message of holiday elegance. Have you ever noticed that simplicity is elegance and vice-versa. 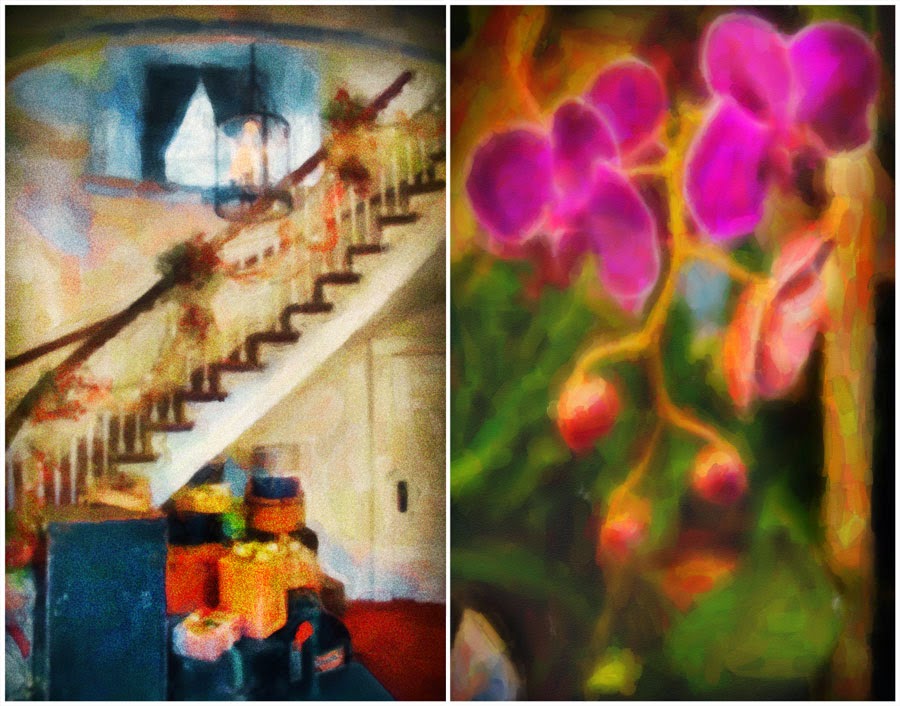 Has it occurred to you how short, “now” has become? We seem to have no time for it. Now seems to be what’s keeping us from something. Now’s an impediment. The du Pont mansion’s interior details  speak of a time before 24/7 news cycles, streaming video, audio, and games. Everyone at the du Pont dinner table shared the same culture-space. There were no virtual guests competing for attention from hand-helds. Its interior details lent themselves to the muted color-capturing-nostalgia of watercolors.
Upon du Pont’s death in 1954 he left much of his estate to support the Longwood Foundation which manages the gardens that  are open to the public seven days a week. And more importantly he left us the opportunity to look at the luxury of his day.We can look at what maybe never was… And I guess that’s what nostalgia is, huh? A look at what never happened, but should have?
Still, it’s moving, particularly at Christmas, to imagine living when families ate together each evening. And more importantly knew enough about one another to share and communicate in their “now” which has become the “when” or “then” of the nostalgia that perhaps happened: Once upon a time... 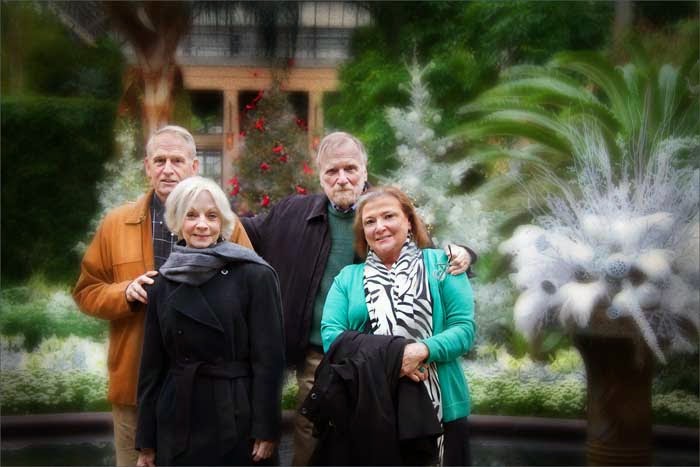 HERE'S THE 12/12/14 GROUP SHOT
Above: That friendly docent who pointed us to the prize-winning bathrooms saw my camera and volunteered to picture us in front of the grand hall where this all starts and ends. It takes about 90 minutes to walk the trails and visit the nearby du Pont mansion. That’s Gib and Marty to the left of Rita and me. Do we look hungry? The Armstrongs drove us back to Frank Fox’s Aussie And The Fox restaurant in downtown Lancaster. Which is where we discovered that, yep… We were famished.
Oh… a last capture. Among the Longwood Collection is a group of Bonsai miniature plants. In the display’s center is this pomegranate girl. “Ewww,” a woman muttered next to me. “I thought my baby was big! Now that…  THAT’s what I call labor !!” 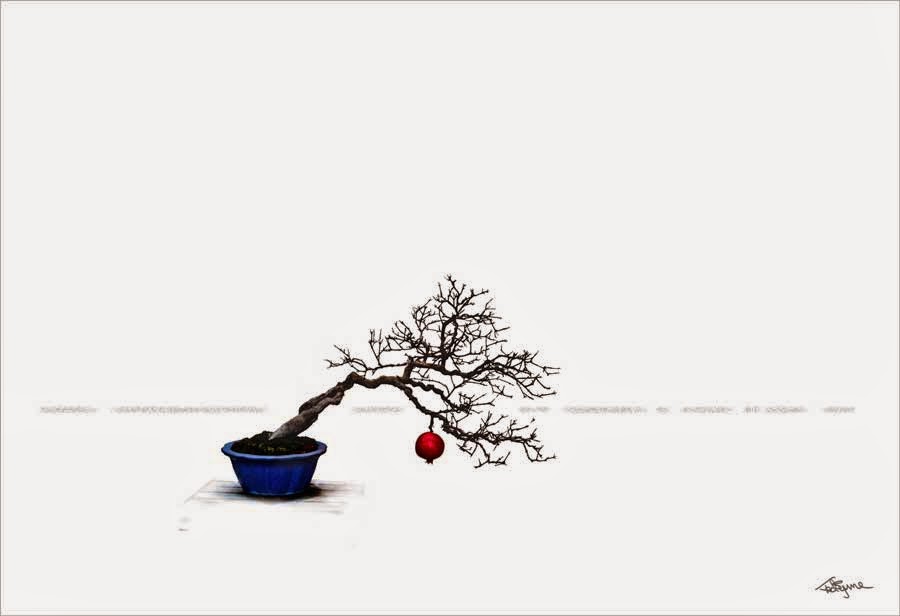