For a larger view... Click on any image, OK? 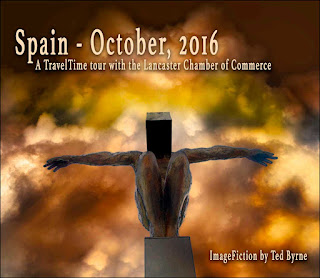 "He who starts a journey of a thousand miles, best have plane tickets." - anon.

Okay, here come a bunch of my images (not photos… images - which are more impressions than photographs… feelings really - a sense of wondering space).

A couple of thoughts here… For those of you who weren’t along, there were about 35 of us, mostly from Lititz!? Maybe because it’s America’s coolest town? Dunno, but I’ve plucked these things from my impressions and they’re as factual as, well - novels, poems, plays, or even melodies are when compared to reality… hence: ImageFiction. But then again, everything that’s photographically based is at least processed through a photographer’s point of view, as well as cropping, lens choice, camera processor, and spontaneous eye for detail… I just dig farther into conceptual stuff.

Have you noticed that when you peer into memory compartments that things look more or less vivid, more or less to scale, and more or less meaningful? So our memory snippets skip their traces, like puppies who’ve lost their collars. ENOUGH RAMBLING…

It rained… Poured off and on for the first third of out trip. And sadly both Rita and I incubated some sort of lung viruses which grew into bronchitis for her and pneumonia for me…. Infections that took us almost three weeks apré trip to finally slough off. So we actually had maybe 60 hours between deluge and plague to enjoy the trip. Worse yet  from day 2 on I got evicted from the  front seat so the interminable hours of bussing left me with few opportunities to spot oncoming scenes and to capture them.  Meaning most of the Spanish countryside went too blurry into my camera to produce usable material. Oh well… Enough whining…

Here’s some of what I got…. starting with Day Two (10/23) between the raindrops first in Madrid, then Toledo. More days will follow here on Image Fiction... I'd of course, appreciate your feelings either as comments here or to mailted@me.com.

Oh, BTW, the sun rises MUCH later in Spain than in Lancaster County so virtually everything before 9am seems glimpsed through dim first light, mostly before actual dawn. Add the storm clouds and... Here’s my forever impression of Madrid. 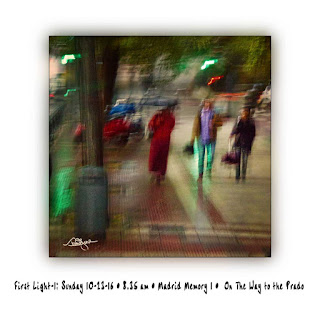 The Prado is Spain’s national art museum. It opens at 10 AM on Sundays. So we stopped to visit this memorial to Spain’s greatest writer. Perhaps it is a lovely park. Not sure since the weather gave the city a kind of feeling of Metropolis. One expects the Bat Signal to flash from the roof of that 1940s skyscraper… Home of Bruce Wayne Enterprises maybe? Dunno, but maybe Meg Lince… the real photographer with our party... grabbed a happier shot here from her perch on the ground before Don Quixote and Sancho? I’m looking forward to seeing Meg's work, maybe on her website www.megolincephotography.zenfolio.com? 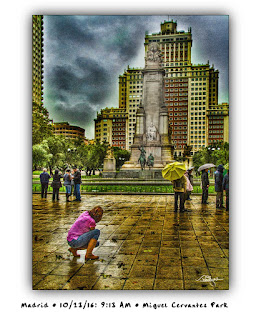 Anyway, our bus was first to the Prado at around 9:40 where this smoking fat guy kept us in the storm until exactly 10. Odd, since ther's a large, warm and comfortable waiting area just beyond those doors to the left which eventually accommodated scores of people. Well, maybe not odd since bureaucrats world-wide treasure their power, right? The rain in Spain was was a steady pain. Ooops, I’m whining again…. Sorry… :-) 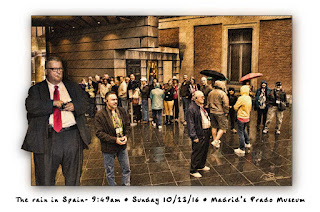 And inside the Prado - what's there to see? Well as far as cameras are concerned… This capture below is all one can photograph. Looks a lot like the Rape of the Sabines in Florence’s square in Italy. At least I thought so but I haven’t asked Mangesh yet. It was good to have a doctor along though, especially a guy with his sense of humor. Rita and I needed both his skill and bedside manner later in the week. Yep, this is the sole Prado image. I really should travel with a tiny spy camera... Sigh....  😏 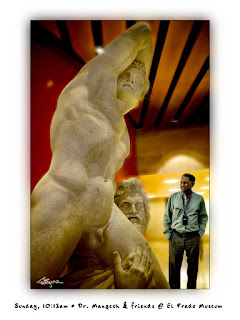 Sad about the rain, Madrid’s Spain’s capitol city and consequently - even under relentless showers - boasts stunning architecture from the nation’s many epochs of greatness. 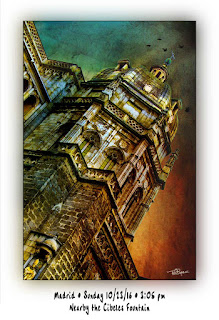 Ooops… this is a wrong-dated capture of the old walled city of Toledo about 90 minute from Madrid where we spent Sunday afternoon. We climbed  into the city on a series of escalators rising through  tunnels that are a triumph of sophisticated Spanish engineering design. As you know, Spain is Europe’s fourth largest economy (following Germany, England, and France), with cityscapes that routinely match or exceed downtowns in Manhattan, Rome, Paris, London, and Berlin. 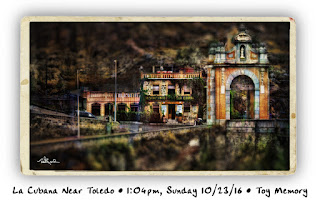 I’ve got scores of still untouched Toledo pictures like this one up above that I’ll work on during the winter… Well after we return from Florida of course :-)