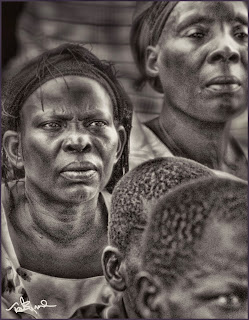 Yep, she's skeptical, but not cynical.

There's a difference you know. The Skeptic is looking for sufficient proof, the cynic can never find enough proof. I'm a skeptic... Like her.

She's from Mityana, Uganda. So are her friends. I hope she liked me as much as I enjoyed meeting her. Either way, it was an important moment for me.

I like my Canon 7d with that EFS 70-300mm f/4-5.6 IS USM Lens clicked on. With the image stabilizer it's easily hand-held and sharper than the razor I used this morning. I've always admired platinum prints. They have a glowing presence that captures imagination like epoxy. Look at the tonal range platinum creates. Haunting, huh?

I processed this to print LARGE! It's about three feet on the horizontal edge. And so crisp you can see me in those catchlights in her eyes. Click on this image and let me know what you think... Or feel.
Posted by Ted at 10:27 PM No comments: 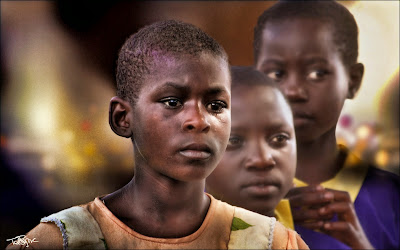 Girl Scouts of Uganda. In the village of Mityana. Beautiful farmers' daughters gather with their families at twilight. In the middle of rich farmland, the town's in the south central part of the country about 50 miles west of Kampala. 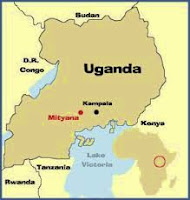 Almost all of Uganda's elevated well above sea level, So even though the town's about 25 miles north of the equator it's almost 4,000 feet high so it's 3,500 folks may need blankets and coats at night and tee shirts during the day. The village is a central place, equidistant from its circle of farms and their families. I've written before... Ugandans are physically fit and attractive people. The kids are charming and anxious to be photographed.

Once again I framed these girls through my 7D's EFS 70-300mm late on an August Saturday. Have you ever used Polaroid large-format film? Its colors actually felt thick. Amazingly, AlienSkin's Exposure 7 can mimic my memories. It's as if Eposure's's poured a syrup of glowing colors, like molasses, over a waffle.

God Is Love Realty and Take Away


This is a cool compound along the Mityana Road, Kampala, in Uganda's Wakiso, Central Region. That's a carpet of yellow cobbed-corn there on the center right. The produce store on the left's selling fresh veggies. Behind it is a take-out restaurant. And off to the right a tavern. See the silver cistern water tank there on the left side roof. Clean fresh water's a challenge throughout the country but there's wonderful rainfall in this lush green country, so a water-catcher like that's a gem.

I lack sufficient knowledge about the country to know why rain catching cisterns aren't more common throughout the Uganda. Instead, struggling against dangerously polluted bogs, ditches, streams and rivers, tens of thousands of people walk miles each day to fill then carry large yellow plastic water tanks to and from municipal wells. And yet it rains almost every day, and much more often during the semi annual rainy seasons characterized by sustained deluges.

Isn't the color of the real estate building striking? Bold, primary painted commercial buildings pop up  about each tenth of a mile or even more often along the highway. Many are painted by national companies to serve as sort of billboards, their colors... red, yellow, blue...and etc. are synonymous with the company logos. They add powerful energy to trips.

When I grabbed the original of this image, it was like an artist's sketch. I knew I wanted to develop it much like a painter. Which I've done now, months later, here in my studio. So much of Uganda feels the way scenes must have felt to the impressionists of the early 20th century.

Impressionism is an interesting word eh? What artist is not fueled by impressions? What else is there?


Geek Stuff: Captured the base with my Canon EOS 7D through its EFM 17-16mm zoom glass. Then brought my concept to life in PS4 coupled with AleinSkin's Exposure 7 to ignite the dynamic range and finally used the powerful overlay tools in AlienSkin's SnapArt's oil brushes.

This port city easily dates back to Rome and before but its street are littered with people pumping pedals on bikes without gears, or walking around these tiny byways. Amsterdam is young.
Oh... I grabbed this with my Canon 7D through its 17-185mm glass focused out to 50mm. Then I determinedly teased out the ghosts with AlienSkin's super powerful Exposure 7's stand-alone system, not this time in Photoshop. Increasingly, Exposure7's becoming my goto process allowing me to express so many individual feelings. And to find Amsterdam's spirits in hues that exist only in my imagination.

It's the power that Exposure 7 puts into the artist's hands rather than its presets. Plus it gives me a options that, while possible in Photoshop, it's eat creative time like a black hole. In this case, I'd purposely (pre-processing) grabbed the image through a distorted plastic glass, and used the distortion to isolate the center. Then I created different layers of fabrication including the shift in the dynamic range in Exposure.

I am able now to execute a process that finds my imagination's image. This is a powerful application with a major learning curve.

Baltimore, its feelings snapped open like a box of nails. One night last week it insurrected. Is that a verb? To insurrect?

For a decade I commuted there where a very large number of people watch TV nightly to see places they can never go. Economists call that the demonstration effect. It's a force that might in an instant twist everything we know into an unrecognizable shape.

There's a micro-thin line between riot and insurrection.

For 60 years our War On Poverty has strictly applied the stick of zero tolerance against lawlessness while the carrot of aspirational jobs and career ladders has gone flaccid at best. Baltimore's a symptom of that squeeze without escape. It is more insurrection against the policy than a riot of opportunity.

This is a montage of AP photojournalists'  images. I'm not reselling them, just emoting through them utilizing PS4, Topaz Adjust, and AlienSkin's Exposure 7.