Leaving Puerto Chacabuco our Norwegian Sun cruised at some 15 knots along the Chilean Fjords then the Straights of Magellan to reach the next port: Punta Arenas, Chile.

Here's an early morning grab taken from the foredeck while it powered south at some 15 knots along these watery highways. It took two days along first the Chilean Fjords then the Straights of Magellan to reach the next port: Punta Arenas, Chilé. 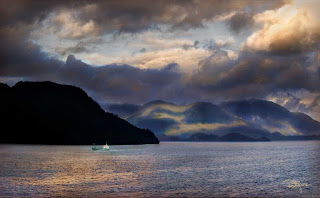 Up in the early morning darkness I was curious how the black blotches along each bank of this passage would look in the first sunlight.

Those aren't tilled fields. Nope, this place is virtually uninhabited. Instead the dark areas are dense green growths, the yellower regions are, for some reason, less fertile. Perhaps they're too rocky?


800 miles nearer to the South Pole, the land grows dramatically craggier and mid-summer temps much chillier.


Imagine how this looked to the 500 sailors in Magellan's 5 wind-blown ships as they discovered these passageways in 1519. Did they imagine that only 17 of them would survive their expedition and get back to Spain two years later?

What passed through their minds as they plowed northward surrounded by these treacherous coastlines and spookily quiet landscapes? Landscapes that remained unchanged from this in the last 500 years.

GEEK STUFF: Hand holding my Canon 7D and its EF-S17-85mm lens on the shifting decks of the Norwegian Sun. Canon's stabilizers are uncanny and it's processor can cut into both the shadows and highlights.

This craggy finger pokes from the sea some twelve miles south of Ushuaia, Argentina – the city at world’s end. Here Patagonia’s southern tip slices into the earth’s only spot where three oceans (Atlantic, Pacific, and Antarctic) swirl together to brew storms and tides which conjure fog, rain, snow, ice, gales, wave-surge, and lightening strikes that last moments, hours, or longer.

Daytimes, hundreds of night-hunting sea lions doze among this rock’s gnarls. Even at rest, their raucous snoring, burping, farting, and random-yelping eclipse the din of New York’s Cross Bronx Expressway.

People who come within feet of these lightening-quick 400-500 pound sea mammals risk maiming and death. Sea lions have crushing muscles reinforced by scalpel-honed fangs and claws. Look closely. See their pelts gashed with cuts, holes, and wounds that etch tattoos of damage?
Not a good plan to tip-toe among them and scream "BOO!" Y'think?

GEEK STUFF: Despite a wind-whipped hail pelting the catamaran’s pitching deck I hand-held my Canon 7D’s EFS 70-300mm f/4-5.6 IS USM lens to get close as I dared to the colony of sleepers. Except for some PS-CC diddling with dynamic range in post, this image faithfully reveals the information within the raw capture.