Click on any image for a blow-up...
NOTE- This is NOT best viewed on a mobile phone which will delete images and text.
The Falklands...   are a glum archipelago about 300 miles east of the coast of Southern Patagonia.You cannot escape by swimming but perhaps you can stow on a fishing boat. There're about 700 square miles containing rock, sand, some brush and a bunch of seabirds. They're hours away from Argentina by plane and about a day or so away by boat. So. if Chilé can own Easter Island in the Pacific, well, Argentina figures they ought to rule this place which they call the Malvinas. 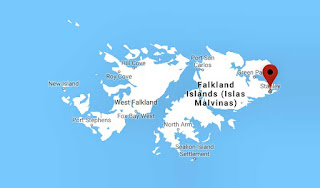 They're about 8,800 miles from Britain which has claimed ownership since the 1830s. That's when they took them from the French who previously grabbed them from the Spanish... Or maybe it was the other way around? In 1982 the Argentines invaded but were repulsed by the Brits, who it's rumored, that four years before under Maggie Thatcher they were trying to get rid of the place and its approximately 4,000 inhabitants. But those British subjects hold onto an important kernel of Parliamentary votes.

So, with a bunch of pomp and difficulty, the English rag-tag navy managed to eek out a victory over the invaders - who will undoubtedly try again - or that's what everyone thinks and causes the British to keep some thousand troopers on the rocks, at shuddering expense.

It's hard to say exactly what the Island inhabitants do for a living, other than police, maintain, school, farm some sheep, and health-care one other, mostly in Stanley, the capital city. Its 2,100 people seem nice, speak English-English, watch American and British satellite TV and are totally inter-netted.
The weather, much like London's, is - spontaneous. The temps are mildly chilly all year round, rainy, infrequently snowy, and rarely hot. Perhaps the best description is, um, grim. But, did I mention that it's a hard place to escape. We trudged past the governor's mansion and wondered what he screwed-up to get the appointment.

Some of the pensioners homes are particularly snug and well kept along the waterfront. And of course they sport white picket fences and tidy English gardens. Notice how few trees are in any of these images... None are native to the place, nor are most of the vegetation populating the gardens.


When we were there on a mid-weekday, almost everyone, except for a dozen or so school kids on a sports' field, was inside. Perhaps that's the norm? As I said - we wondered what people did in Stanley but except for shopkeepers who were busy with a cruise ship visit, there was no one to ask


Built upon a jutting finger of rock, the place is hilly, but not San-Fransisco hilly... just sort of annoyingly difficult to walk. The tallest building's about three stories high, and since everything's on a rock face, every structure's got a view of the protected harbor. A harbor that's insufficiently deep to berth large-draft ships. Tourism's a big money-maker to Stanley since Patagonian tour ships routinely stop. Why? I guess someone's paid them off. Most of the population's historically been composed of British Service pensioners. Odd, since life's essentials are boated or air freighted in from great distances - it can't be a cheap place to live.

Like every other tourist place, the biggest attractions are their two churches, a smaller Catholic chapel, and the southernmost Anglican cathedral in the world. For some reason, the Cathedral sports a couple of blue-whale jaw bones that were restored a decade or so back and I guess form a backdrop for every non-Catholic bridal party.


The British call these places, "box-churches". They're fabricated structures from the home country and were sent to each new conquest of the former empire to be assembled-by-numbers in their new possessions - bells, belfries, altars, stained windows, and pews. If you've seen one, you've seen the lot.


Like most socialist-ruled spots, the public buildings, roads, and infrastructure's are among the best maintained (look at the Parisian and Russian subways for example). No real difference on the Falklands. Police, public health, and municipal buildings there, like this custom's house, are among the spunkiest. Of course the Governor's mansion (Government House) seems the  grandest in Stanley.

The Falklands historically were a sort of garage for repairing ships caught in the maelstrom of sailing around Cape Horn, a business which has Panama-Canaled away. Leaving little behind of historic, scenic, or recreational interest. It's not someplace where anyone intentionally goes, but instead people seem to wind up there on their way. So here's 80% of our gang of wayfarers trying to figure out if we should pay a couple of hundred bucks to take one of the multitude of Land Rovers on a three hour ride to a distant beach where some King Penguins were spotted a couple of days before. We didn't and those who did reported that IF there were Kings there - they'd swum away.

Thousands wander daily through Recoleta cemetery here in the epicenter of Argentina's brilliant city. They're exploring the excesses of the nation's richest families proclaiming their posterity, or at least trying to grab a piece of immortality for what? Their names?

These are the pyramids of Argentina writ tiny. The metropolis is just north of earthmoving Patagonia where seismic forces are working to crumble South America's lower tip  back into seas.

So it will take a tad longer in  geological time to crumble all of these little buildings-for-the-dead back into watery dust. 7,000 miles away from Rome yet all built in that ancient city's classic forms - I wonder what will remain of these ruins in a couple of millennia? Judging by the cracks already - you think archaeologists of the fourth millennia will find as much remaining as we do today on the Italian boot? 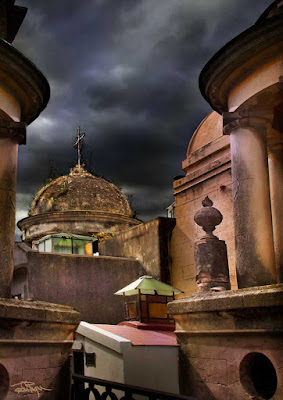 Here I prefer the word necropolis to cemetery. The olden latonical word has such an ancient sense of what? Dread? Already, well over a century of weight's chipping and cracking at these facades, while hairy grasses are reclaiming the domes - tamping them back into earth. All while gravity and inner moistures are doing what they do to the flesh and bones entombed within these sepulchers of the rotting rich. Brrrrr...

Real estate gone now in Buenos Aires Recoleta cemetery, so the families built upward creating a sort of congested dead lock - dread lock? The hubris of wealth crammed resources into these spots that geological time's crumbling, pounding, and packing back down.

Recoleta Cemetery is not so much a final resting place, but a slow-motion vanishing point.

*GEEK STUFF:* Captured by my Canon 7D Mk II on February 2, 2019 then processed in PS-CC with a myriad of custom tools and filters. The tombs seemed a clutter of the unfeeling muscles of once-powerful Argentine historical footnotes.