A Mist of Tower Bells 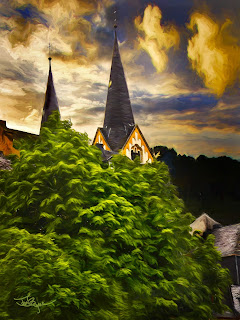 Nearing Vienna
A mist of tower bells
Glazed the Rhine
Snuggling into ears,
Muscle, and
Feeling.

I still haven't figured out how to use GPS feature on my 7D Mark II. From the date and time our Teeming River Cruise boat was maybe ten miles west of Vienna. The sky was clearing and the bells pealed. Our boat was so silent that only the waves lapping against the shore added a percussion line. Pretty moment, very typical, but nothing much deeper. Hmmmm... perhaps if I'd dropped a nude couple climbing the trees? Howzabout I dyed the two yellow? Is beauty alone sufficient excuse for making an image

I think we use beauty up quickly. There's something about it that wears out fast. Even when the original moment startles, its image rarely invites a return to study or enjoy it.

Oh well. You all know that i'm an Alien Skin beta tester. And I totally enjoy using their newest sophisticated application. But just now the lure of Topaz's new Impression offers so many options to dig into an image. Fact is that the two apps are powerfully complimentary. I finished this image in Alien Skin's Polaroid, creating a romantically subdued palette that I have no other way of accessing.

A few years ago, a friend told me that she thought filters were merely devices to save a bad image. No, she's wrong. No one charges that a larger bristle brush is what is necessary to save a mediocre oil painting. Filters are tools. I've never found one that allows a miraculous one click redemptive overlay. Instead I employ my large collection of filters to work upon parts or an image - or a feeling.

Perhaps I'm just paranoid? And yet the same folks who abhor post processing techniques are gear heads anxious to talk about the latest lens, camera body, or light array. Is this an ideological thing: progressives anxious to find new tools, conservatives determined to protect tradition? Wuddaya think?
Posted by Ted at 6:03 PM 1 comment: 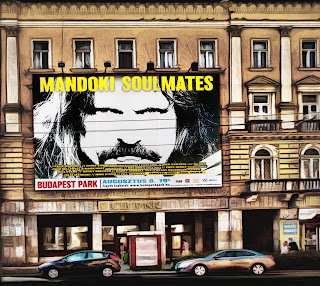 Got to spend a sizzlingly hot July 2017 day in Budapest. The city baked beneath a squint-making sun. Stupidly I chose a seat atop one of those sightseeing busses where the sun melted both my brain and this place's urban charm. Finally, in center-city we found an outdoor café where, from across the street, this facade glowered down - bringing to mind the Soviet Big-Brother who'd imprisoned Hungary. But in reality, this sign was cultural appropriation from another land - mine. Do young Hungarians get off on Totalitarian Art? Is that how U.S. pop music's enjoyed?
I've read Europeans intellectuals dismiss the U.S. as the place that went from savagery to decadence without passing through civilization. And  yet here Hungarians scar a grand (if dingy) piece of their architectural inheritance with this! It is as if someone stirred a stinky boot into the goulash.
Still, I'm thinking this image of that dichotomy offers so much to both emotionally and intellectually fill exactly the right spot in a hip-elegant living space. You think? 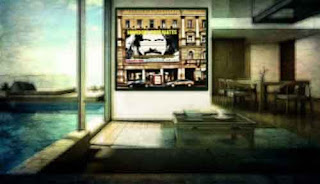 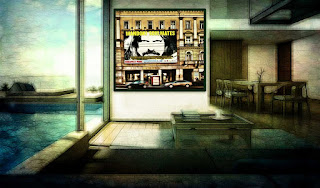 BTW: What's the English equivalent of the word 'Mandoki'? It sounds vaguely Asian, no? Just how far east had we travelled? :-)

Gotta' catch up a little... 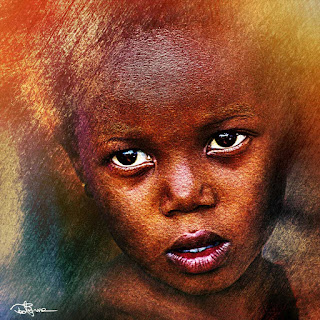 Okay, success on the internet demands the 3 Fs: Fast, Frequent, and Fresh. Which is why I am unsuccessful on the internet. I've finished 100s of images which I've meant to, but have been to lazy to... post. And I'm content with all of them. What I won't show, I trash. Well, mostly. So maybe it's time to do a little catching up? So here's a painting I did of a Mityana, Uganda Girl Scout Brownie. And... 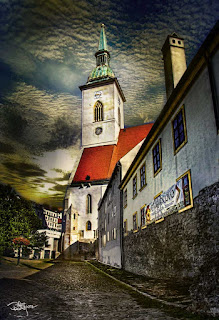 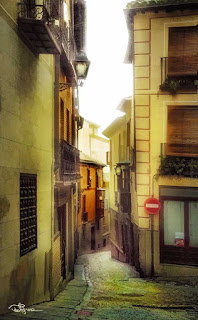 Here are a couple of street scenes. The first is the 15th century gothic cathedral of St. Martin in Bratislava, Slovakia. It was built to match the Bratislava Castle which looms almost directly above it. The church tower's built into the city's defensive wall. Slovakia's a smaller European nation that would undoubtedly be much larger today had they not been the first European nation to export its Jewish population of 57,000 people  to feed Hitler's ghastly "Final solution to the 'Jewish Problem'". Of course that Catholic Church continued its activities as the cattle cars were crammed with writhing masses of people. A guidebook pointed out that, "A small but significant neighbor of the cathedral is a monument to the national synagogue which stood next door for centuries until the Communist government demolished it around 1970". Uh-huh, the image looks spooky, right. Well so is this street's history.

The other image is a misty morning street corner in Toledo. Spain. Can you sense the history veiling the neighborhood? 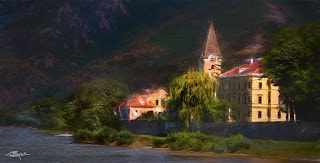 Speaking of street scenes, well howzabout a watery street's scene? This one's along the Danube between Dornstein and Melk, Austria. These folks live next to a busy floating highway. You think they have wet basements? 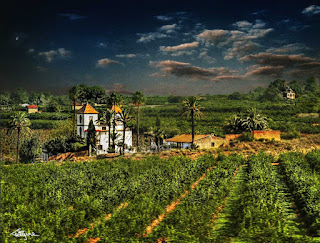 Here's a Spanish finca growing Valencia oranges in Spain. Finca? Uh-huh, these are country homes, usually plantations or farms of some sort. Usually is a tad old fashioned way to describe fincas. Today in hispanic countries the country home of affluent people are frequently called fincas whether or not they grow or raise stuff or animals. Pretty rich? 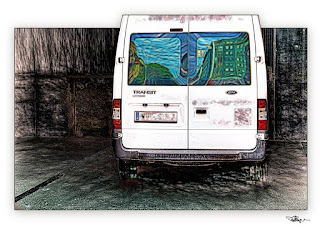 And this street scene's from the middle of Vienna - yep - the Austrian Vienna :-) Sooner or later I'm going to post a passel of totally gorgeous Viennese scenes. My dear friend Andreas Mannesinger hosted me for an entire day in the Austrian capital. It was wunnerful. But this image could be from almost anywhere, huh? But this thing jiggled my imagination for some reason - probably the reflections in the rear view mirror... And the jiggling caused this semi-poem to tumble free:

Through back-eyes Truck
Watches history suck
Time through a tiny
Vanishing point.
.
Watching and holding speed constant
To average 60 seconds per minute
Is what Truck does.
.
But larky:
Sometimes Truck’ll
Stutter-foot momentum.
Or jerk at the wheels.
.
Causing things to:
.
First seem longer
Than it takes for
Right-guy to text
The gal who gave
Up her info.
.
Or when Truck
Gooses its gas how
Time shrinks shorter than
The hours before a life-test.
.
And when Truck jerks
At the wheels?
.
Its windows reflect a
History that’s swirled,
Snarled, and sqooshed
Together In clots and breaches.
.
Truck’s wondering though
What happens to
History if …
.
If even for an instant
.
The truck stops here?

Jeff & Gina Paglialonga are the owners of Teaming River Cruises. It was their riverboat that drove us through the epicenter of Europe (Amsterdam to Budapest)  during the summer of 2017. Jeff's personality's bigger than the kilometers his river boat travels. OTH the food on The Royal Crown - his company's flagship - is good enough to gobble. So? Why not, huh?

Okay - I'm neither fast, frequent, nor fresh - but it was a turtle who beat the rabbit, right?
Posted by Ted at 9:16 PM 6 comments: