In Pompei There Lies A Gate 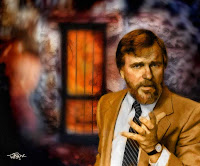 I wanted mystery... A sinister foreshadowing. "Ahah!" I says to myself. "Self, you can get that with Bokeh2 and then use AlienSkin's SnapArt Oil Paint to hold all of the elements together.

And what you may wonder are all of those elements? Well here's another tiring picture of me seemingly lost in deep explanation.... You know, revealing the essence of an astonishing truth? And meantime there's this glow coming from within a room barred off to the public in the very heart of the ancient Roman city. Now how to meld them convincingly onto a story arc?

Meld, weld... whatever. The trick was to pull the two ancient images together seamlessly. And... and.... Well, what you think?
Posted by Ted at 9:49 PM 2 comments:

Okay, I am psyched over the cheeeeeepo camera and lens inside of my bottom of the line Verizon - LG - Clamshell phone camera. It's always in my pocket, right? And now I've got this Bokeh2 thing to test. So when I saw a classic red 57 Corvette convertible sitting on a grassy field as the late afternoon sun was setting.... well "Hmmmmmm...." I says to myself.... "Hmmmmmm...."

And this is what happened. Izzit hot or not? 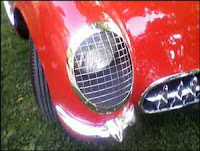 Well, the cool thing about the camera phone is that there isn't any geek stuff. No ISO, no f/stop, no speed, no focal length. NADA! I'm guessing that the aperture smallish so that the thing's always set to infinity. I'm guessing that there's some sort of electronic enhancement to the processor that tries to find a preset dynamic range throughout the frame. The idea is ... I don't care. Point and shoot. So here's the virgin image from my FlashCard. The rest is PS4 and Bokeh2. Wheeeee!
Posted by Ted at 10:06 PM 1 comment:

<- Click here
Fortunately I have this virgin image (direct from my FlashCard) of a cooperative model who I got to stand outside of the gym against a corrugated red tin wall on the anniversary of his first full year of dieting and training (July 9, 2010). This secluded side of the building was in shade with the main indirect sunlight coming right to left. There was an unpainted cement wall off to the left which acted as a natural reflector. All of the light sources were natural and sufficiently bright at 6:14AM on a July morning to allow a low ISO (200). In other words, perfect conditions to capture a tack sharp image with max Depth OF Field (DOF), particularly from some 15 feet away from the model.

The goal here on my fifth test of the beta version of Bokeh2 is much more modest than the former playful attempts to use it as a stand-alone graphic device. Now I'm looking at its ability to compliment an image without imposing itself upon the viewer. I wanted to make it as invisible as possible to simulate the natural DOF of a long lens opened to it widest aperture. To that end I cropped the original layer and used PS4's content aware scale to turn the image into a horizontal. Of course I eliminated distracting imperfections in the tin wall behind the model.

Why a horizontal? Well the original is a snapshot with the model standing dead-center almost up against the red corrugated surface. So this altered composition applies the rule of thirds to powerfully draw attention to the key subject.

Okay, now I duplicated the cropped layer and then opened that duplicate in the Bokeh2 filter. There I simply chose from the preset lenses simulated in the application and picked the Canon 300mm f/2.8L@f2.8. I rendered the new layer, masked it, then painted away the blur over the model.

From there I duplicated the visible onto a new layer and using an adjustment curves layer, reconfigured the dynamic range of the image to emphasize the highlights in the wall while darkening its shadows. Again, I masked out the model. Which was pretty much the entire operation (except for a couple of sharpening steps of course). 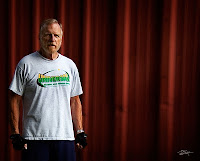 Cute enough for ya? Sometimes it's enough to go for the "Ahhhhhhhh!"

Here's my wife's grand niece KatlynRose meeting my dog Rocco. Or is that the other way about? Anyway, it's yet a fourth chance to kick Bokeh2 to its extreme, this time playing with the apps ability to mimic LensBaby's selective point of focus. Again this series was captured with my Canon G10 at 5300 ISO and is a nightmare of noise. Which of course cries out for the softening powers of Bokeh2.
Posted by Ted at 5:01 PM 1 comment:

Are they
Coming back
For us
Tonight?

Let's try Bokeh2 with a tad of help from SnapArt2 shall we? Note, I took a passel of pix of KatelyinRose last Saturday with my G10, point-and-shoot. That meant shooting at a high and noisy ISO. So, what to do? Well, I'd intended to use the images as a test of the new Bokeh2 in combo with PS4 and knew as a consequence that noise would be no problem. See what I mean?

Alien Skin has asked me to test the beta version of its newly developed Bokeh2. Here's a first try, done very quickly. The only filter tool is Bakeh2 in PS4. It is very smooth.
Posted by Ted at 11:22 PM No comments:

OMG The Baby's Playing With it!

Not a good idea to let kids play with the dollar. It'll break.
Posted by Ted at 9:13 PM 1 comment:

Friday marked a year for my recent training regime. 365 days.... A friend Bill Hayek used my camera to grab some shots. Here's a first take from the set outside of the gym in the morning light. There were big fluffy clouds that covered the sun and brought the contrast down. But we still picked a shady spot on the building's north side. We're having a hot July spell here in Lancaster County... Shirt-off weather. So....

It is really hard for me to work on a self portrait. I'll leave this up for a short period, until I come down with a bout of humility (they really do happen... honest). But anyway... here I am 45 pounds lighter than a year ago. Rita's worried that I've become too skinny. Time to start packing it back on I guess?
Posted by Ted at 11:58 PM 6 comments:

How many Clairs are there? All of them are pretty. Each is different from a moment-before's Clair. Someone once wrote, You can't dip a toe in the same river twice." That's a lot like us I guess. Each moment we've moved along... the old us left behind on a camera's flash card. Have you ever noticed that the camera captures a time which happens so quickly that even we aren't aware of it. Our minds work more slowly than a photographer's shutter. Cameras then capture things or people that happen so swiftly that no one really sees or even experiences them. Hmmm... sounds super spooky. Gotta think on that.

you can see here. Then I masked out the parts of Clair which weren't needed. Finally I used a couple of tools, Topaz to reset the dynamic range in selected spots, then Alien Skin's watercolor to dream out the background (along with just a kiss of AlienSkin's Bokeh in a couple of intrusive spots).

Oh yeah... you'll notice the red/yellow caste on the original images here. That was easy to desaturate in PS4.
Posted by Ted at 5:35 PM No comments:

<- Click Here
The evening of July 4th was bathed in glorious light for Banjamin's play. I cranked my Canon EFS 17-85mm (f4-5.6) lens all the way out to capture the lad twirling in the hot spot.

The way that lens churns backgrounds into delirious bokeh is spellbinding, huh? And look how it captures the rim lighting! The optics we've got at reasonable prices today were beyond my dreams as a young photographer in the 60s. Whoa! The SIXTIES! They don't seem 45-50 years ago. AAARGH!

I knew as I took this series that I'd be cropping to reinforce the vertical feelings of the boy reaching toward the sun. And I suspected that I'd want to emphasize the romantic nature or eternal summer with an oil painting... plain air... mood.

So in PS4 I cropped it, adjusted the tonal range, snuck in some additional background flora, then turned to Topaz Adjustment to tease out the colors and the details in Benjamin's hair. From there I loaded up Alien Skin's Snap Art and carefully created a number of layers in Oil Paint, each with different brush sizes and shapes which I masked back into the image to emphasize the glow of the evening light. However, you can see I was careful to mask out the SnapArt entirely around Benjamin's face so that the final image is truly mixed media.

I like it as a portrait of a boy in the summer sun.

And the original? How much did it change? Here.. you decide.

I'm certain you would have seen the boy so much differently in this original capture, huh? That's the nature of art isn't it? Each of our imagination's create a different story arc... Personal wonder... But of course... art without wonder is merely craft.
Posted by Ted at 1:21 PM 2 comments: