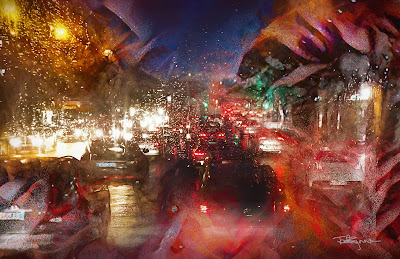 Twin streams pierce the lingering darkness of Madrid's AM drive-time where the sun comes late but rains come early. The morning's metal muddle squirms from both directions - as if one flow is seduced to fill the hole the other's created. A sort of equilibrium of ballast. Pity that the soft stuff within those machines won't trade homesites so that the morning snarl goes flaccid.

GEEK STUFF:  How'd I do it? Well I pointed my 7D Mark II's Canon EFS 17-85mm through a bus windshield to grab the scene. Then in PSCC-2018 the image was kneaded with an array of tools I created along with those from Topaz and Alien Skin so that each of its parts could be first plucked for independent attention then reassembled to highlight my question about commute-frustration (comfrust?).

How badly did the Apian Way clog from morning traffic into ancient Rome? Were the arteries of classical Athens clogged with squirming streams of carts, riders, and carriages? Did Egypt or Mesopotamia need traffic cops? Is congestion a symptom of civilization's  success or its curse. Certainly it is a tax that seizes hours/days/months/years of life. In a way, that's the harshest tax of all.