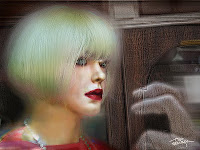 Can the
Costumes of
Daytime
Become the
Magnets of
The night
Time
Stalker?
Bwa-Hah-Hah-Haaaaaaaaaa!

<- Click here
Nothing special I guess, but I needed a birthday card for a child that could later be framed for her room. Of course if you gave it to your friend, child, grandchild... You'd make up the story to tell which will be remembered every time the card is revisited. I imagine it in a frame on a bedside table that will support a trip to dreamland, over and over... :-)
Posted by Ted at 8:17 PM 1 comment:

The mosquitos were big as birds as the sun rose over Chatham beach here on Cape Cod... Well, that's how they felt. The buggers seemed to hit like bean bags as they drilled into me. I'd been out of my car maybe four minutes as I grabbed at this pano then dashed back ahead of the snarling swarm. I still can't decide if they resented my arrival or welcomed it like a hungry lion herd felt when they stumbled upon a lonely wildebeest. I think I've left less blood behind when I've donated the stuff at the hospital.

Anywayzzzz.... you can see from the virgin images which I tugged into this pano below that the photos could have used more time for color balancing, even straightening, huh? What's more the Coast Guard station there in Chatham (the Atlantic Ocean's on the other side of that dune the building sits upon) was way small thanks to the perspective of my wide angle lens. So, how to create a powerful image that didn't look enhanced?

Well, first off I stripped away the blue and warmed everything up by color balancing the image with the curves tool, then added a warming color filter layer that I first blocked then brushed into the appropriate areas. Then I teased the building larger and moved it a tad leftward to honor the rule of thirds. It took a bit of time to hide the seams from both that move, that enlargement and of course the lines where PS merged the three pano panes. If I'd had more time, I'd have balanced the three original exposures more carefully when I took them but those bugs were spattering off my body and worse... attacking my eyes. EEEEEEP!

Then there was the straightening problem. So I used the ruler tool and aligned the roof line to vertical, bringing the entire frame into balance. After that came the relative dynamic ranges needed to balance the lower half of the image with the sky. All done with adjustment layers of course. Additional adjustment layers allowed me to brush back in the highlights in the grasses so they both sparkled and pulled the eye toward the building.

What I was after was a classic sunrise image where the enhancements, while considerable, were invisible. Did it happen? Does the final image at the top create the illusion of authenticity? Hope so... One of the reasons I enjoy enahced phtographic art is that the tools let me reveal what my feelings want to find in an image. And sometimes create ImageFiction. Which of course is the um, clever name of this blogsite, right? :-)

<- Click here
There’s a place that you keep
All your world that it seems
Glows dark as you sleep
Filled full with your dreams.