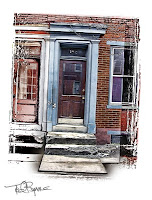 <-Click Here
Is civilization stronger than concrete? As our stoops go... izzat the way we go as well? Do we need to maintain? To preserve? Or to replace? Maybe what we need to do is flee.

But that assumes that there is a place to which fleedom can be found. Are we a flee people? It's clear that with some new concrete we can flee in place. There are cultures of concrete. Cultures that preserve, rebuild, and repair. And there are cultures of crumbling. Cities, more than anywhere else, seem to be places where cultures collide. Incidentally, three weeks after I took this picture, the residents of this building rebuilt these steps, repointed their bricks, and reapainted their home. Crumbling is now in remission.
Posted by Ted at 9:58 PM