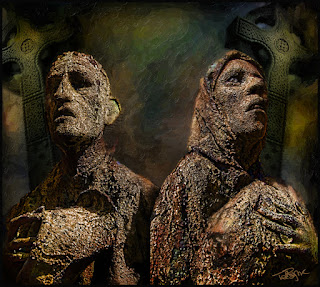 Once upon a time, England ruled a conquered Ireland. It's native Irish people labored as tenants – forbidden by British law to vote or own land – paid in the potato crop they raised on a quarter acre of marginal land allotted to each tenant family. The rest of the rich earth produced corn, grain, vegetables, and livestock as rent for the British – frequently absentee – landlords. Between 1845 and 1852 a virus annihilated only potatoes, while the majority of remaining land produced rich yields for export. There was abundant food, but none made available to the Irish tenants who farmed it. They starved by the millions suffering not in a great famine but a Great Hunger. Other millions emigrated, many to America, Canada, and Australia. The country has never regained that mid 19th century population.

In Dublin stand these specters of The Great Hunger's victims.

Invited Up To See His Etchings

At Waterford he sits
Digging into sparkles
Peering from the outside in
To a crystal ball
Filled with
Tomorrow.

We went wandering last week in Ireland (4/28-5/5/13), PP in PS4 to enhance the dynamic range of this etcher's magical aura. AlienSkin Bokeh 3 masked in to create depth.
Posted by Ted at 3:47 PM No comments: