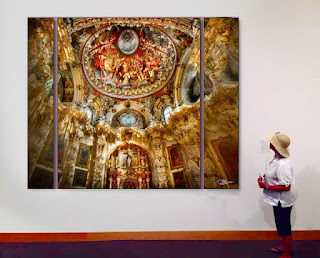 I  hope you’ve reviewed my 2016 feelings of; Madrid, Toledo, Cordoba, and Seville - right?Well after a 2 and 1/2  hour bus trip of some 156 miles we arrived in Granada on Wednesday October 25th. 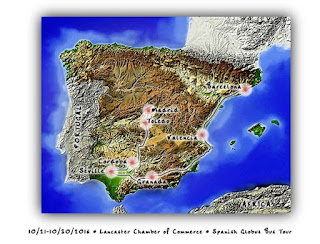 An hour by car from the ports of the Mediterranean, Granada sits at the foot of the Sierra Nevada mountains which feed the four rivers that converge at the city which is home to a quarter million or so people and its entire market’s population’s about the same as Lancaster County, Pennsylvania - maybe a tad smaller. 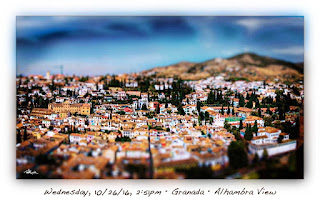 Sisters Deb & Joanne travelled Spain with the legacy, spirit, and love of their brother Bill.

Yeah, I captured this moment below in Granada. But without that title would you wonder if this man ran the New York Streets? Marseille's? Istanbul’s? Maybe Vienna, Dublin, Mbarara, or Lancaster, Pennsylvania? With the slightest switch in scenery – and I do mean ‘slight’ – here’s a big-city, 21st century morning moment. I wonder, did up-scale men scramble for exercise in 3rd century Rome? 2nd century Cathay? How about the Baghdad streets of say 1,500 BC?
Have men (and now women) always run for fitness when civilization’s security walls grew sufficiently thick? Or have they only recently begun to scamper in Moscow, Vienna, Tehran, or Bangalore? Is this a historically accurate urban cliché or just a momentary – yet widespread – fad?
Hmmmmmm? 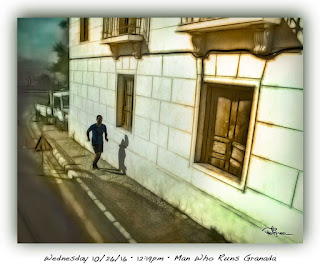 Our AM stop in the river city was... 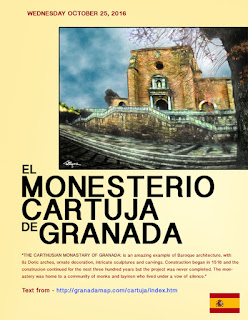 Down below see? That’s Bruno of Cologne the founder of the Carthusian order of cloistered monks in 1084 in Calabria, Italy. In fact the Carthusians are also called the Order of St. Bruno. The man lived (1030-1101) within the eye of the theocratic/regal storms that roiled over Europe, and while he personally affected the role of a hermit, he was a learned confidant to both the Papal See (from the ecclesiastical Latin meaning holy seat: the name of of the Pope’s throne) and to worldly monarchial palaces.
This grotesquely beautiful statue adorns one of the most elaborate (some might say decadent) altars in the Catholic world, occupying the epicenter of Granada’s Carthusian cloistered monetary.
Bruno was apparently never tortured much less martyred so there’s little to explain the damage the sculptor imagined to his left eye nor the various carvings into his face. While he personally lived in austerity, he had access to assive resources which he used to endow churches and both the Carthusian and Cistercian orders of priests and lay brothers which he was instrumental in founding.
The statue (like much of the art in Granada’s Carthusian monestary) is grisly and consistent with the imaginations of directors of over-the-top horror movies. I have no idea how that connects with the quiet piety and deep scholarship of St. Bruno. But then, that’s the purpose of travel, right? To experience the puzzle of other cultures.. 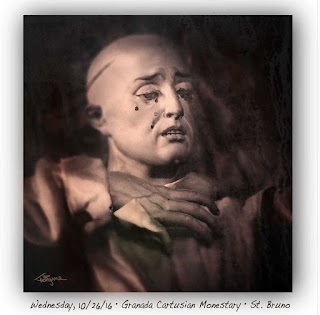 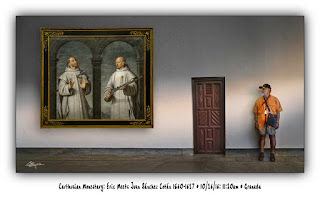 TravelTime hostesses Lori and Courtney took turns as my gentle keeper. Okay, the camera distracts me so I straggle. Notice how casually Courtney stands there like, “Who Me?ME? Watching you Ted? Nah… " 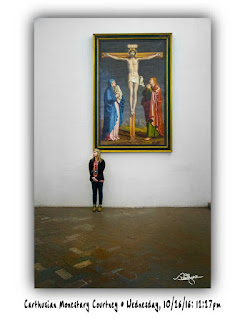 But the stark cold monastery corridors all led to its central chapel which seems, well, un-monkly. 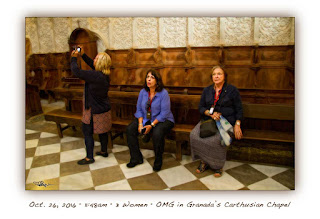 Remember, these guys took vows of poverty in a land of enormous wealth that was concentrated in very few hands. Large hunks of the population were impoverished… while the monks of St. Bruno’s built this... 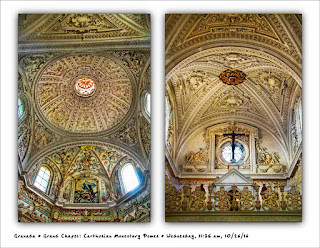 And this… Look familiar? (Hint: see the second image up above) 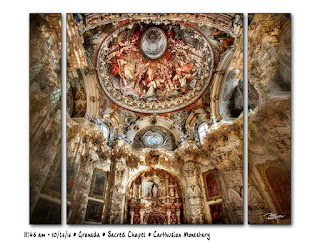 When it looks like gold… In 15th century Spain… it was gold. 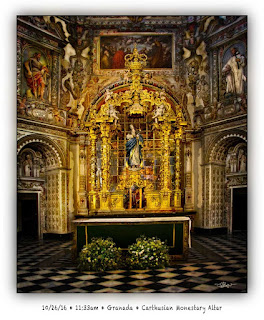 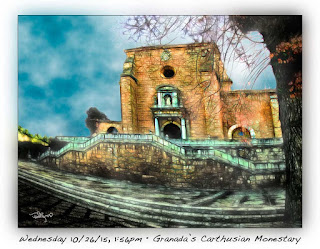 Although downtown Granada wears it’s modern wealth  with comfort… There are, since 2009, numbers of once-elegant now-empty stores along its richest street. 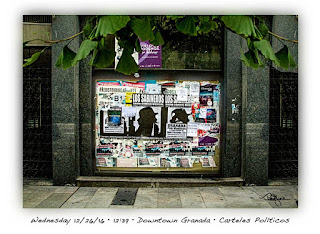 Bernie Hershberger frames the entrance to La Alhámbrá which  lets you feel the Moorish dreams that an army of stone masons built into this mighty 13th century citadel/palace overseeing Granada. Still mysteriously placid, the property transferred peacefully to the Catholics leaving its masonry un-cracked along with ancient ghosts. 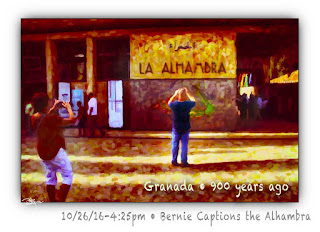 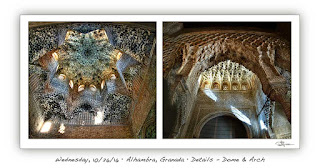 The Alhámbrá’s a Sultan’s 700 year old palace with the Spanish city of Granada wrapped around the base of its hill-perch. As you can tell from this typical palace doorway, the Disney people have visited here a lot, Right? 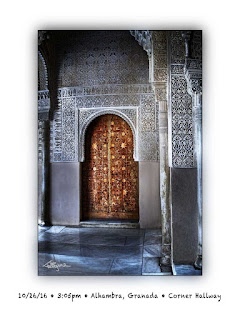 You wander the Alhámbrá halls and feel the Moorish Sultan’s presence. What’s below though isn’t a window or door – just an alcove in an almost forgotten corridor. It’s a cranny carved into this space when much of Europe was only just opening its eyes to the Enlightenment. Years before ‘enlightened’ (yeah, that’s sarcasm) Christians expelled the Jews from Spain in 1492. 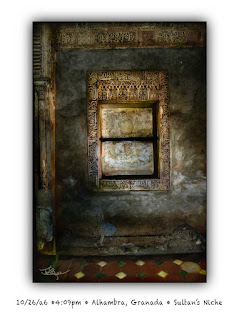 Yet today when Christian Europe struggles against sharing chunks of its culture with new, largely Muslim, annexers whose ancestors they also expelled – the dusty beauty of this insignificant niche seems relevant. If a human is the sum of his/her ideas, it’s important to remember that culture is all about gathering, defining, and defending those ideas. Cultural clash threatens what people are – and yet this dimly lit niche glimmers a serenity that resonates across cultural battle lines.
Stairway To Heaven?
See the pedestal next to the steps below? It’s probably where a Seraglio’s guardian stood, like in Eduard Charlemont’s legendary 1878 painting <http://www.philamuseum.org/collections/permanent/102792.html>. Okay, Charlemont took a tad of artistic license, what can I tell ya? Still, can you image the fantasies this doorway to forbidden Seraglio chambers triggered 700 years ago when it was, um, fully functional? I’m thinking that Freud probably loved the symbolism of the structure, huh? (Don’t know the word “Seraglio”? Look it up! ;-)
Moorish architects understood the tension between the need for interior light and the rigors of Mediterranean heat. Their ingenious solutions involved the delicate latices which formed lace-like patterns across portals open to the skies. Here, in the torpor of an October afternoon, that exquisite workmanship allowed the interior in this corner a shimmering glow. A glow that reinforced the mysteries that once-awaited above. 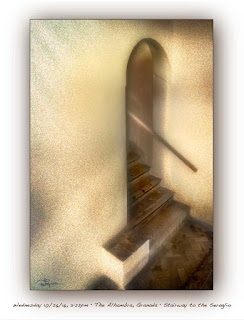 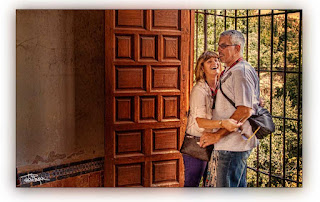 The Alhámbrá  sprawls like the Topkapi Palace I’ve pictured among my Turkish images. I could narrow my eyes and easily imagine myself in Istanbul. The Alhámbrá's breathtakingly detailed with architectural accomplishments unrivaled throughout Europe for a century at least. And yet for all of its grandness, there are quiet spaces with mysteriously gentle lighting like these small rooms that sing to their solace. Sometime in the 700s, the Sultan of Granada walked the gardens in his Alhámbrá palace. This corridor wanders for about a quarter of a mile parallel to another pathway to the left. Throughout there are water features and these intricately executed mosaic walkways. 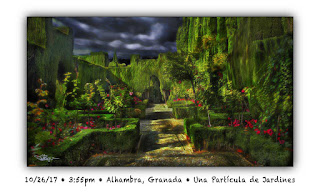 The Moors ruled much of Spain from the 700s until the end of the 1400s. At their height of power, Granada was a richly artistic home of scholarship and science. And the Alhámbrá  was the boast of its affluence. Can you imagine the demand for stone masons, sculptors, painters, wood workers, carpenters, plasterers, plumbers, glass makers, and mosaic artists? 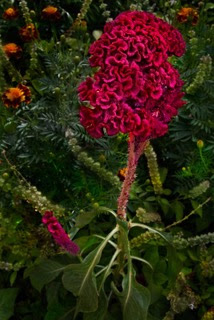 Actually all of the beauty and exquisite detail was a sort of marketing campaign. See, Granada's Alhámbrá was built in the middle of the 14th century by the caliphs of the Nasrid dynasty. Seems the Moors who'd invaded Spain in 711 were, by the 1300s, worried about their image of waning power. How better to project their dissipating might than to create a dream of heaven on earth? The place was created from plaster, timber, and tiles. Look at the serene workmanship around this pool that's survived  some seven centuries - even Napoleon's attempt to blow the entire place apart. 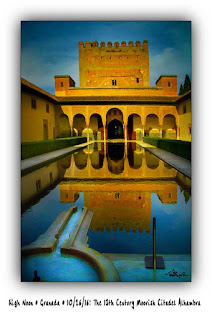 Feel the Moorish dreams that an army of stone masons built into this mighty 13th century citadel/palace overseeing Granada. Still mysteriously placid, the property transferred peacefully to the Catholics leaving its masonry un-cracked along with ancient ghosts. 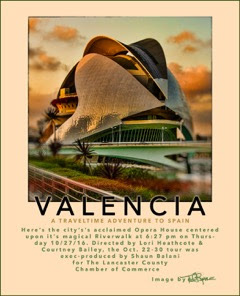 And what about Valencia? Next time...