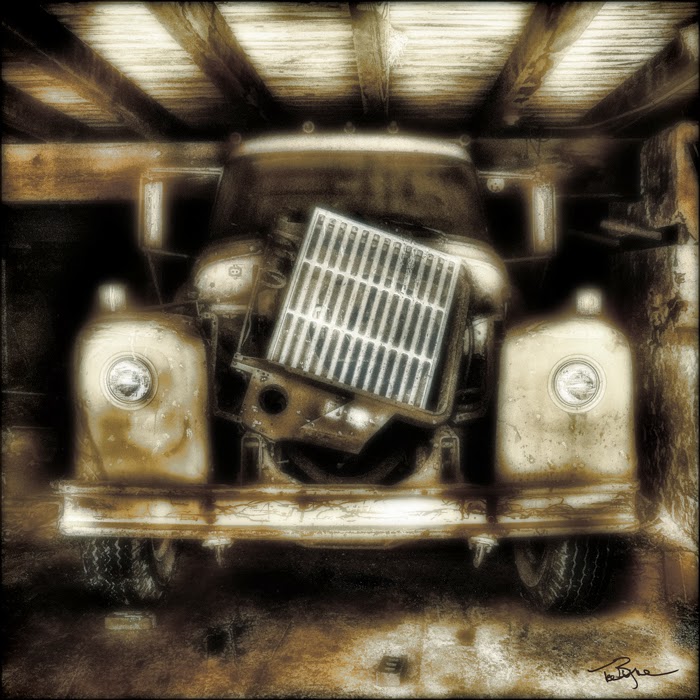 Now, is the art in the barn
Or is the ban part of it?

Reassembled to make art again
Or has it become art now

That it's broken apart?

I carry a Canon G10 on country bike rides. It's a nosey little camera and captured this RAW image in an open barn near Manheim, Pa. Post processing happened in PS4, and the magic sauce was poured through OnOne's Perfect Effects 3 to heat my own glows. 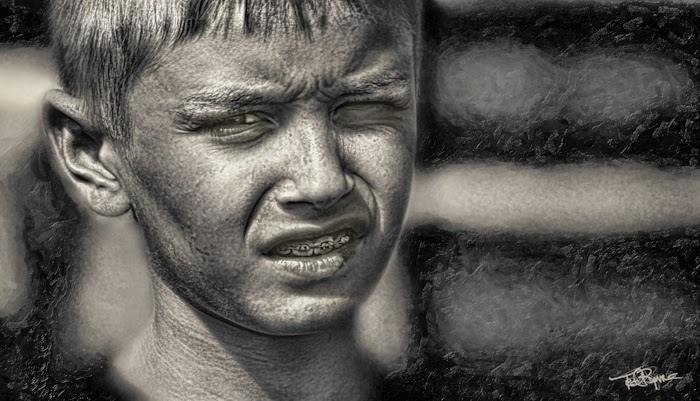 You can feel their chill
When they stare and drill
Through a look that sports a hard grill.

Caught this hot-fashion kid and his grillz in my Canon 7D though its EFS 70-300mm f/4-5.6 IS USM Lens. Post processed in PS4 with AleinSkin's Adjust using a modified B&W Polaroid film emulation and added a touch of custom palette. I texturized the background bokeh that the long lens created with a touch of AlienSkin's SnapArt through a kiss of customized impasto. Of course the dynamic range was enhanced using standard Photoshop devices.

The boy's a presence, huh? 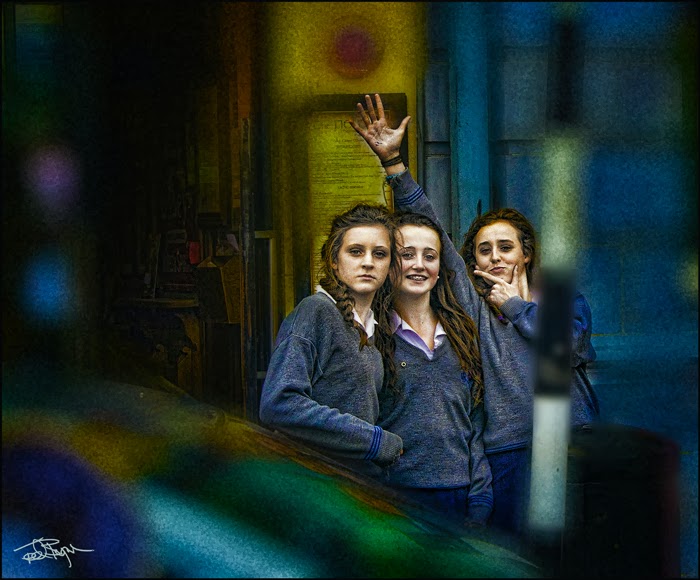 Are they beautiful? Captured (if it's possible for anyone to capture these three in any real sense) along the streets of a damp, chilly, and dreary Kilkenny afternoon. The trio burst from their shells at the sight of my telephoto with the lass on the right growing a finger-beard to mock my own. Can you look at them and NOT smile? Wuddaya-think? Are they 16, 17 years old? (or 30 or 40?) From a certain age women have that mysterious power of seeming ageless in their beauty, huh?

GEEK STUFF: It was a rainy Kilkenny early-May afternoon pierced through my Canon EFS 70-300mm f/4-5.6 IS USM Lens on the Canon 7D. Post in PS4. Tools? The texture's my own mix. The dynamic range was dug out with Topaz Adjust. And the palette was created through multi adjustment layers each designed in AlienSkin's Exposure 5 with a boost to the DOF through a selective application of Bokeh 2. Oh yeah. I kissed the palette a bit with AlienSkin's Exposure 5, that I manually over-rode to find my feeling inside the frame. 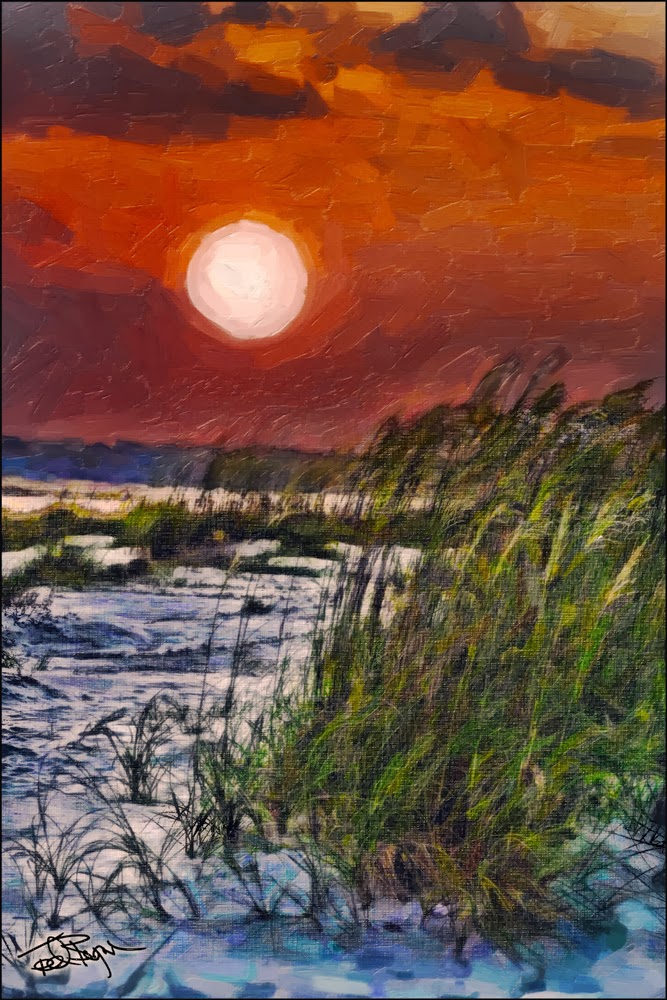 A winter stormed
Leaving the sun
Too weak to warm.

Yet groundhogs warned
Of cold beyond
A woman scorned.

On Wrappings & The Craic 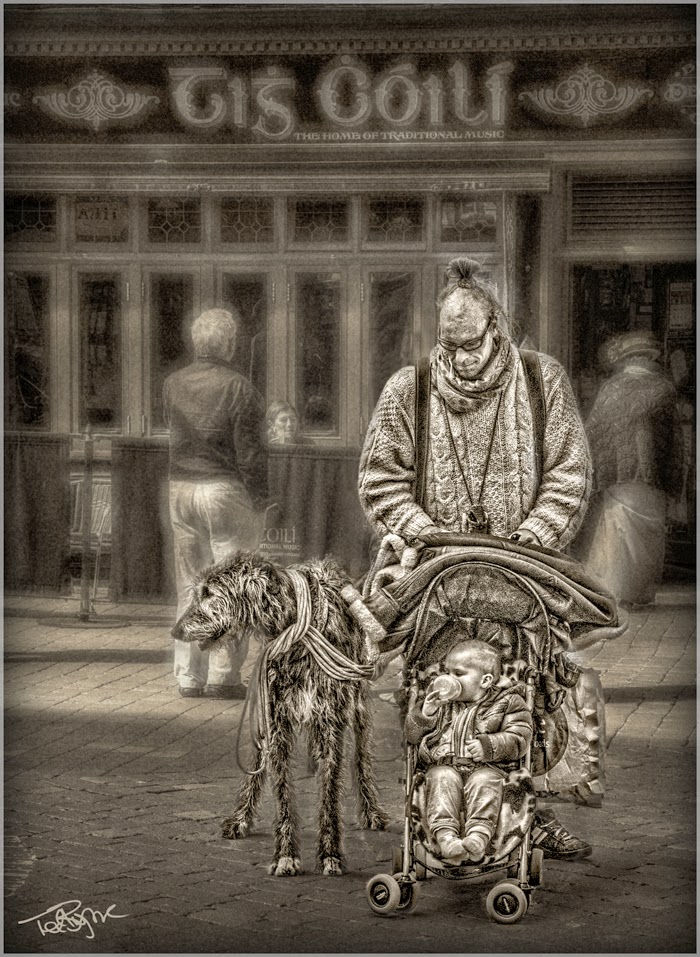 People
Are the layer
Between

Wrapping
And sinew that
Describes

Their own
Closely cherished
Concern.

A man’s
The sum of his
Caring.


For the poet and artist – streets invent people, rather than the other way around. Or at least they present them as feelings whose wrappings are like a novel’s opening. Wrappings set the playwright’s scene… They are life’s adjectives. And occasionally adverbs… It’s the artist’s job to drop in exclamation points!

This guy’d just left the Tig Cóilí on Galway’s Mainguard Street down at the end of Shop Street where I’d pointed my Canon 20D’s Canon EFS 17-85mm. Tig Cóilí’s known for its music and the craic.

“Uh, wuzzdat, Ted” you wonder? Well since 1905 the Tig Cóilí’s been filed with news, gossip, and conversation. It’s an Irish thing… Maybe jive's the word that comes closest to the craic here in America… But not really since jive’s gone archaic, huh? Anyway, I reached into this image with PS4 and Photomax on the first round, then all sorts of tools to prod at different parts of this feeling… tools like Topaz’s Adjust & BW effects, plus AlienSkin’s powerful Bokeh. Of course the final texturing and all of the brush work were my own designs.