There're novels behind every face.

Every artist understands the challenge of when to say, "There. That's finished! Now I can turn to another work." While we all know that a work is never finished. Nor is any one interpretation or conceptualization adequate. But the composer enters a last note, the poet a last word, and the novelist a last feeling. So do I. You? Do you know that anything ends sufficiently to write "Finis"! after a work?

Anywayzzzzz.... You'll recall I wrestled with this man's image in late May. Then I had run into tech problems, which never did resolve themselves. But his story continued to haunt me... And then it occurred to me to think that he was best "penciled in". Uh-huh, that his story was difficult to capture and is best rendered in zillions of strokes.

In this "Tell Me A Story" series, I'm interested in your thoughts/feelings re. this man's thoughts/feelings. Faces trigger us to wonder, then tell ourselves their story, right? So? If you found this as the illustration above a serious magazine's short story... What would it be about? Hmmmmm?

4th of July: An Allegory?

Art without wonder is merely craft, right? Last Monday morning I pointed my iPhone camera around  Lancaster's Musser park which is a few steps from our home. For maybe a half century the park's hosted an "Old Fashioned" celebration of US independence with children's games, cake walks, a band on the portico, and mounds of food. Thousands of people - the city's diversity - come but they space their arrival so that there's rarely a  moment that seems crowded.

The park is ringed by pre-bellum homes and sits at the rear of Lancaster's Museum of Art which occupies the 19th century Grubb Mansion whose rear portico acts as shell for concert bands, speeches, prizes... Like that.

This year the sky that usually blares down a baking humid heat - was grey. Rain threatened but stayed away 'till after 2 so the temps were comfortable.

Volunteers from the sponsoring Musser Park Civic Association arrived to get chicken going...

The ice cream truck and vendors set up along the north side...

Frank Byrne chairs the Musser Park Civic Association, the neighborhood group which produces the Old Fashioned 4th. They act as junior partners to the City of Lancaster. It's the city that maintains the park, and the association which raises funding for capital improvements. I'd drop the Association's URL here, but right now it's kind of under repair.

4th of July kicks off the summer political season in Pennsylvania and for decades each major party's brought its tent and candidates to circulate. It's a good thing. All politics are ultimately local and at this level neighbor-candidates know one another and share common goals if not tactics. There's no rancor even if opinions don't mesh.

BTW, look at the twin tents up there. Notice something missing? Uh-huh. No presidential posters! Nope, their omission's not a statement - rather, well, seems that there just aren't any -yet. With the GOP convention two weeks off and the Democrats even farther away, the national committees haven't shipped yard signs, bumper stickers and the jetsam of candidate marketing. It's  sort of refreshing that we're not yet sucked into that Big Time candidate selling. Nope, 4th of July's for retail political marketing, one-on-one. Neighbors talking. Almost reminds you of a gentler time... Which may have never been,  huh?

I'm still working on my feelings through images  beyond these I've posted today - trying to find some wonder 'midst the craft of picture making. Which brings me back to that tiny essay way up on top of this blog post... 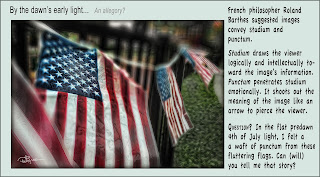 There's a veneer of celebration that coats an Independence Day party. There are clichés that we preserve in amber of romantic old-timey memories. But the symbols also tell stories of the moment and coming moments. Perhaps the grey dawn coating those fluttering flags is metaphoric as well as factual? Perhaps it's an augur? An omen? We live in the crack between back then and tomorrow. And perhaps philosopher Barthes' punctum's  worth considering?

The sun'll come up tomorrow... and upon some future 4th of July celebration in Musser Park. But will it host the same culture on the other side of today's crack? Will it be recognizable to the people who lived back then? Or to those living here in this moment? Does that flat light cranking down the reds, whites, and blues aflutter on the bars of their fence - foretell? Forbode? or foreshadow?  Or is it just a snapshot in punky light?

Does that image trigger thoughts? Feelings? Tell me the story you sense in the dawn's early light that fell here in this tiny spot on America's 240th birthday.