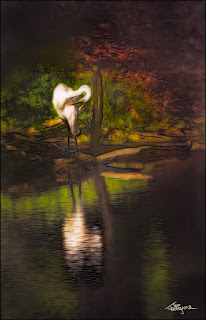 Okay, I stalked her. Poked my 300mm lens through the leaves to her secret spot across the lagoon. She preened and primped... Maybe unaware of me... Maybe figuring the water was wide enough to keep a lurking human an easy take-off away.

They call ponds and lakes, lagoons in Sea Pines Plantation on Hilton Head island where South Carolina - almost Georgia - summer wetted down the air. If you're outdoors, southern seacoast's grow humidity thicker than the syrup folks pour over breakfast grits. And the heat keeps the air hotter than the bikinis make their beaches.

It's where lots of gin mixes with even more tonic as afternoons commit muscles to low gear. It's when the smarter birds find secret spot to digest their morning breakfasts and recharge for a twilight wade back into the lagoons, oh... and into wherever people were stupid enough to stock coy ponds. 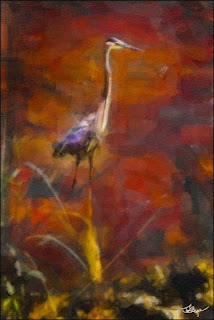 So that gal up there wasn't about to let me get her to do anything unladylike. Which is why I'd mistaken her glowing-white body for a swan and figured that I'd be able to create a post called, "Swan Lake". Wrong... It's actually "Egret Lagoon" where the big birds prowl among alligators for fun and profit.

And so, realizing the story wasn't about swans I figured I'd find me an egret at work in the marshes to work into a painting that captured an impression of both the bird, its hunting, and the POP! of southern American summer color.

A day or so after I invaded the privacy of that beauty up above... I found this guy working his way slow as suitor on a first date toward his prize. And once again my Canon 7D's EFS 70-300mm f/4-5.6 IS USM Lens did its job. Which is a capture that I couldn't have made years ago without a tripod. But the combination of image stabilizers and the camera's processors let me grab tight hold of the moment. Which, thanks to a lot of PhotoShop processing combined with the melding of a number of layers of AlienSkin's SnapArt filtering and texturing, I was able to make my concept visual. 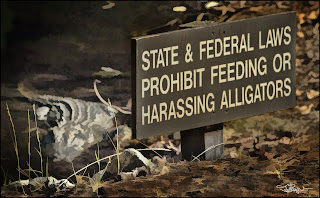 Down in Hilton Head, SC last week. Summer comes to Dixie with an early muscle, especially in the Low Country... along the the Atlantic Coast. Hilton Head Island's shaped like a running shoe and we stay very near it's flat instep. Once a bog, it's flat and canal-irrigated to draw the brackish water back to the sea. If the ground's not everywhere as damp as once-upon-a-time the air's still wetter than a stoop-laborer's back And twice as thick. Mid-day's are for beaches, pools, and air-conditioned spots cluttered with books and adult beverages.

Out back we store ... Well, have you noticed that the word "shed" is double entendre? As a noun, it's a place where we keep stuff. As a verb it's the act of discarding. A bike shed sort of promises both of those things. And this flat island teases you into believing that you'll shed the vacation belt-lime baggage if you''ll peddle your bike from the shed. Getit? In a way, nothing says island summer like this lazy morning image of those backsides poking out and teasing me to wrap my fat legs around their fat saddles. And yeah, why not, huh?

To circle the jungle between me and the sea. And the way it dares me to leave the bike and wander trails that wind somewhere. Which I almost did except a snake rolled and wriggled out of those leaves there to the lower right and coiled blink-fast onto the trail and then off into that underbrush. So much for the dare... Back to the biking... When, just to my right,  I heard water plop down from the bike-path's bank and jerking around I saw...

this thing and peddled like hell away, parked, and tip-toed back, my Canon 7D with it's 70-300mm lens cranked all the way out. Through which... I watched it, it watched me, I focused, shot, and backed way up. After gasping a bunch, I went back and kept shooting while it lay there watching, only its eyes flicked, the rest of that body flat... still... cocked... and stinking up the thick swampy air. You know the word, fetid? Yeah, now imagine this thing's breath and you've got a match.

Oh yeah... Wildlife thinking reminds me that I probably forgot to post this wild herd I captured in Uganda's Queen Elizabeth Park. Okay, that was last summer and there are crocs, not gators in Africa so the segue's kind of hard to explain. Hmmmm... But these pix are all summery, right? RIGHT! So it's a theme :-)

He leaned
Againt the
Morning breeze of
Life. 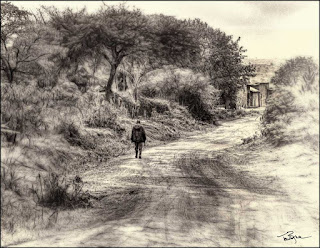 Commuting with day-break-chilled shoulders near work 5 miles west of  Mityana, Uganda. Captured through my Canon's EFS 17-85mm (f4-5.6) glass. Processed in my imagination with PS4. It rained early that August morning and this road was puddled and its vegetation bowed. Most roads in Uganda are surfaced with a thick red clay and well maintained to rid them of pot holes. They're probably easier on the feet, ankles, and knees of walkers than cement or macadam. Good thing, walking's normal for thousands we saw.
.
It's side-effect is the shaping of trim, strong people trudging into life's wind.

Three River In The Night

Way above the Three Rivers of Pittsburg there's elegant dining behind a crystal wall... It's been there since the 1930s and 40s when Sinatra fronted the Dorsey Band up in the night-time sky with Steel City glimmering out to the horizon.

So okay so far... but.. Well. That's when Fred and Ginger were whirling through platinum and night dust... And Those evenings glimmered like diamonds on a princess's tiara.

Hell, we can do color now with the ease of decorking champaign. So why remove it? And yet... sometimes a color-ectomy glides into a space where my emotions are so much differently receptive. Why izzat? Thoughts? Feelings?

BTW... See that point down there? That's the hotel where Rita and I held our wedding reception 47 years ago tonight. Seems like yesterday.