A Child Is A Future Probe

Buried deep within our children: a time capsule. To be opened... When?

At Andreas request.... Here's the virgin image from my FlashCard. Comments?

Help, I'm under attack by my tools!

<- Click here
Help, I'm under attack by my tools!
My dad used to say, "Ted, it's a poor worker who blames his tools." Sigh... But it's true. I'm living in a shoddy Steven King novel. I can't seem to tame my filters or techniques. Look at this image taken at Eleanor Rooselvelt's Hyde Park, NY home called Val-Kill.

Nowhere does it communicate my political feelings. Nor does it show something else. Hyde Park is the Land Time Forgot! There has been no change there since maybe 1947! i swear, right in the center of town there's a roller rink. Everyone who toured this place with us remembered the Roosevelts. Now you have to remember that they governed in the 1930s-40s. I felt as if I was suffocating in a musty pile of my parents clothes. And yet, instead of creating an image of moth balls, or reaction to a tour of the Democrat Party's Vatican... instead what came out was that image up here.

I have become an obsessive romantic! Look at this thing. It is .. charming. Charming is not how I felt. How I felt was like... MMMMMPH! I am quite happy to be a citizen of today. It is as if I was visiting the old country while holding daddy's hand. Much as I loved them, today is the world I watched and helped to get made. I like it.

Somehow I KABOOMed! in Hyde Park. Nostalgia kicked me into a psychotic break. AAARGH! And did I get an image of it? Huh?? Huh? Nope... What I got was On Golden Pond up here. I gotta get control of my tools.
Posted by Ted at 4:31 PM 2 comments:

<-Click here
John Updike wrote, "We cannot expect the camera to suck in, with light and shade, the photographer's emotions."

Of course he's right, but we can expect today the photographer to reveal his emotions almost transparently in the finished image. Right?

<- Click here
Sitting in the library. Snowflakes falling outside. Gray November. Listening to torch singers from the 30s & 40s... buzzed on a Mucinex high. Thinking of California. We'd have liked to live there. Family here on the East Coast was an anchor. So instead we visited a lot. Hey, still do. And on gray chilly days I wonder how it is in Sausalito, or down along the Big Sur.

Images bring me back... once again to Pigeon Point.

But then I wondered what I could pull away and still leave a sense of the place? How much can be chipped out without loosing that dreamy mood. How about this? Huh?
Posted by Ted at 3:22 PM 4 comments:

What's The Story With Flowers?

Have they anything to offer but beauty? Must you justify them because of their prettiness? They share a force with babies, puppies, and kittens which squeezes an, “Awwww!” out of us. Now I can understand our hard wiring to young mammals, evolution’s hooked that up for obvious reasons. But why to flowers? What primal instinct is served by us feeling so much from blossoms?

They rarely signal the presence of food. Nor water. They’re lousy shelter. They’re never warm in the cold, hell, they’re not around then. And since the most colorful thrive on direct sunlight, they don’t advertise relief from heat. So if it’s not survival or sustenance, what’s the deal?

Let’s go back to the baby thing. We’re drawn to the big eyes and helpless movements in an instinct to hold and protect. And their memories certainty are one motivation for procreation. Hmmmm…. Are flowers wrapped up in our protective or procreative instincts? Certainly Georgia O’Keefe discovered Freudian metaphors in blooms for – well you know where I’m going… Or where she went.

Oddly though, flowers seem to appeal even more strongly to women than to men. Perhaps it’s cultural, but in most societies, aren’t flowers a coveted gift by men to women? I suspect there is some gender correlation to the intensity of their appeal.

Regardless, I have taken flower pictures, hasn’t everyone? And each time that I do, the best of the shoot seem to resonate among the better images I’ve captured. Until I wonder about them. Yes there are all the classical elements of texture, form, shape, and palette. And they can be easily framed in any of the most powerful compositions.

But once you’ve done that, what have you captured? April has found ways to speak eloquently through her flowers. I cannot find that voice. But what do I get? A pretty flower picture, like the ones that come with new picture frames. Beauty does not resonate, it merely attracts. We use it up quickly - it is monotonous.

Perhaps the problem with pictures of blooms is that they do not die. They do not wiggle, sway, or glottal together to create new patterns. Perhaps it is the persistence of photos which may distill out the beauty of the original flower, but not its impermanence . Perhaps it’s the fragility that they share with babies, puppies, and kittens that make the real things more interesting than their photo representations?

I want an image to bring me beyond itself. I cannot find those stories in my flower pictures. Nor can I find the feelings that are larger than the blossoms. Which probably leads to my disappointment with my images since I can’t seem to visually answer the question: What’s the story with flowers?
Posted by Ted at 10:41 PM 3 comments:

I'm almost out of my website/blogsite cards. So it's time to think about a new design. Hmmmm.... Since there was a lot of nagging from people who were in disbelief that I wasn't transfixed with taking pretty pictures of Fall - well, how about a tongue-in-cheek presentation of a Fall image? A BIG Fall image. On the wall of a gallery. A BIG gallery. Of course it's a virtual gallery. But why not... I am a virtual artist. And here I am presenting a virtual Fall. Hmmmm.... maybe the gallery's not BIG enough?

What do you think? Maybe it should be presented on the wall of Grand Central Station? Or how about I put it up and present it on the wall of The Metropolitan Museum? Or... or.. how about St. Peter's Museum in Rome?

Most mornings he glides past.
Effortless.
A body matching the road.
They dance.
But which one
I wonder
Leads?

Here's the virgin image from my FlashCard... Comments? 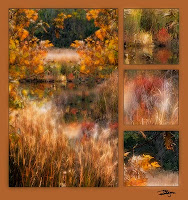 <- Click here
There's a strip mall in the City of Lancaster. When they built it- it became apparent that Red Rose Commons would not be able to spill onto an adjoining wet land. So imagine this... here we have a wild bird preserve that's the result of and virtually a part of a city mall. Cool, huh?

Oh, as for the image look. It's Fall. I take pictures. So I've got to take at least one picture of Autumn in Pennsylvania. Those are the rules in the Ancient Book Of Photographers,right? And this week was the high color. Yesterday I went to Barnes & Noble at the mall, and took this on the way out. Another annual task checked off.
Posted by Ted at 9:09 PM 6 comments:

<- Click here
Something large and different for a living room wall. Needed color and bold graphic design. Needed a strong feeling of boy. The parents are happy. The grandparents though... they are ecstatic. I like ecstatic a whole bunch. You know what I'm saying here?
Posted by Ted at 10:56 PM 1 comment:


After years: Election Street’s there.
Is a smiley umbrella sufficient?

From here
It gives up so little
Of its Rewards or
Risks.
Posted by Ted at 9:26 AM 1 comment: