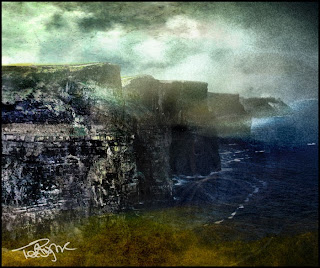 The Cliff of Mohr guard the southwest coast of Ireland. Imperfectly though: Their walls breached by Celts, Vikings, Normans, and Brits - but never by Romans.

Confronted by mid-day sun – The photographer's nightmare – I chose a hand held five piece panorama with my Canon 7D through its ES-S17-85mm at f/14 - 1/400 dialing an ISO of 1000. Then significant stitching and post processing with PS4 involving custom textures and various adjustments layering with AlienSkin and Topaz Suite tools. In order to deal with the searingly burnt-out mid-day skies, the clouds are hand painted in PS4 as are the mists. 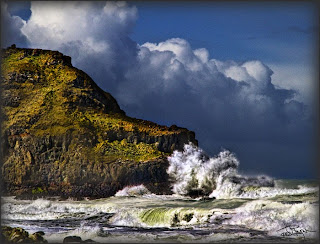 Reconsolidation: Some profession, maybe the psychologist's, created that word which means, "the moment you remember is the moment you forget." Here's a promontory poking from Northern Ireland's Giant's Causeway into the gush of the North Sea. Immovable object slams into irresistible force. Or maybe the other way around?

The camera stops time in sharp focus... but reality does neither of those things. Impressionism explains memory from a stream of glances. It's been written that, "an artist's vision is centered in wonder rather than in an eye." Art pokes into recollections to pluck out what we cannot see. Never saw. What we remembered or felt. Feeling's what impressions are about.

Art without wonder is merely craft.

The Giant's Causeway's southern end sits here on the Northern Coast of Ireland pointing toward it's other side eleven miles to Scotland. It is one of Britain's most visited natural site. See that sky, only minutes before it drove a May hailstorm hard at us. 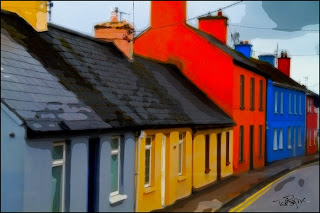 Dunno where in Ireland I captured this. We watched thousands of these homes drive past our windows. They filled my memory with their colors, boxed shapes, and tidy; lines, walks and alleys.

They weren't like American memories... not exactly. They weren't like European memories... not exactly. But they weren't foreign. Weren't exotic. They fit onto my story arc comfortably: Abstract pieces of box-color with plenty of fireplaced-space inside.. Each with doorways that open, uninterrupted by porches or stoops, directly onto the world's-rush. The world that bussed us past their un-barred windows to leave a sense of color-brushed security.