<- and you may enlarge this tutorial by clicking on it.

Recently I entered 'Spirit' into a challenge on a forum where it was initially rejected because the moderators felt that the rules required that all entries be photographs. As you can see, Spirit does not have a traditional photographic look. And that is the wonderful thing about being a photographic artist today. Just like composers, novelists, poets, sculptors and painters... we are totally free as photographers to create anything we can imagine. This is wonderful but sometimes confusing to visitors.

'Spirit' is completely a photographic composite. It only differs from the wet darkroom technique of sandwiching negatives into an enlarger in nuance. But that nuance is magical, eh? I've invited the judges to visit this site, and to look at my explanation here, showing how I made Spirit soar.
Posted by Ted at 4:15 PM 2 comments:

Actions have consequences
Rights have responsibilities
Unless... You have...
Tenure.

I'm still experimenting with my new Canon G10 so again - for the geeky folk like me who enjoy this sort of thing... Direct from my HD card, here is the virgin photograph of my professor just as I caught him at ISO 400 in the existing light "on campus" in Adamstown yesterday afternoon. Nice automatic color balance, eh? And the painting effects? All done with assorted brushes in PhotoShop... Enjoy.
Posted by Ted at 10:13 AM 5 comments: 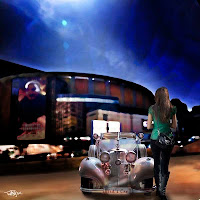 Parked outside of Madison Square Garden my Mercedes 500K Special Roadster glimmers in the city, huh? It belongs there with its top down and motor purring. Purring.... it's a sound that attracts, right? :-)

Okay, here's another shot, a virgin photo of that 1936 Mercedes on my office desk top pulled right from my HD card. Sigh, I like it better in NYC. Whadaya think? 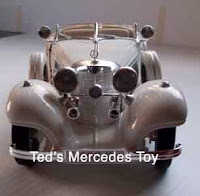 Yeah... I've been to this place before. If you click here, you can see my first (award winning) visit to this image. But as a result of a lot of Australian School influence at the RedBubble Forums... texture techniques are becoming more interesting to me.

Okay... okay... they can be a gimmick. And yes, as April has commented on PhotoSapiens.com, they frequently are used to correct what was otherwise an average image capture. Just recently I actually took what I thought was an average snap shot and purposely lathered on the texture

But, like any filter, lens, POV, or enhancement... texture can also be a useful tool. In this case, I was pleased with the original and wondered if a texture could add some additional wonder to the image. Like a lot of you, I don't take pictures, I make images. So techniques which might reinforce the mystery, resonance, or delight I want to communicate are always interesting.. as long as the technique does not wag the dog... so to speak. Soooo..

With all of that in mind, I've revisited Rocco's Adventure. And? Does the texture deepen the story, or pull water out of the emotional pool leaving a more shallow experience? Thoughts?
Posted by Ted at 10:52 AM 6 comments:

Wonder is a perishable commodity - interest, like bread, can go stale.

And if I'm correct, then the challenge we face is in keeping our wonder engorged. And that's one of the reasons why photographers are generally gear heads. It's not that we expect to find the silver bullet in each new lens, filter, or tripod. Nope, we're not looking for the ability to be creative... uh-uh. We've done that before, know we can do it again, just as soon as the mood hits. Trouble is the pesky lengthening time between moods.

Which is probably one reason I just bought this new little point-and-click Canon PowerShot G10 that I showed off yesterday. Cameras don't make art, artists make art. But I figure if I can carry a full function camera in my pocket which will do more than the Leica M series could do back in the 60s... Hey... I ought to carry that camera around. If I'm going to walk about framing all the time, why not have a camera close by to exploit those frames?

So here today I'm posting the second image from my new G10. Yesterday visitors commented on the G10, but they wondered if yesterday's image was direct from the camera. Nope! Neither is this one. I don't want a camera anymore which will produce final photographs. I have lost my faith in a camera's ability to create images which express what I think or feel. But I've used cameras which cannot produce photos which I can enhance into the wonders or ideas that I want to communicate.

So the question I have about the G10 is not whether it will produce perfectly rendered moments, but whether it will give me material which is indistinguishable from the stuff I can gather with my DSLR and its lenses.

So here's my second try from Friday afternoon's shoot at the Amish farm. This bird house sat exactly to the left of the corn cribs on yesterday's image. I wanted to find wonder in that little spot. So? Does this create a sense of place? Is this G10 capable of doing what I've been doing for over half a century with my lenses and cameras?

For those who are interested in reeeeely geeky stuff (like me), here's the virgin image direct from the HD card without any enhancement of this image.

You can judge for yourself how much opportunity the G10 has provided me in kneading out my own feelings about the moment. I think this Canon machine's a keeper. Do you agree? I can see a lot of situations in which it could replace my 40D and my three lenses. There's only one problem though. It sure doesn't give me any authority. I doubt anyone will give me the respect that comes when I screw my Canon EF 70-300mm f/4-5.6 IS USM Lens onto the D40. It sure doesn't feel like a serious camera. While it's about the size of the M series Leica's, well, with the large LED in the back and the just-slightly-clunky body... It sure won't get me into any place that excludes beginners. Which is a topic for another day, eh?

Suffice it to be said, this box, and its user (me) will probably be dismissed by other dedicated photographers. It makes it look as if I have failed to pay the dues for admission into the club... either in terms of gear or in terms of experience. Hmmmm.... that could be an important consideration here. But again, that's a whole new topic.
Posted by Ted at 10:58 PM 11 comments:

My new Canon PowerShot G10, point-and-click came this afternoon. So at 4:30 I raced about five miles out of Lancaster and on a back road found this Amish farm vista. It's shot in RAW mode at f11 and 1/500 with an ISO of 200 with the sun low in the sky behind me. The thing allows for full automatic override and it's got a 5X zoom that seems pretty well made to match the camera. It fits into my pocket and, oh yea, most importantly it's got a range finder and a 17.5 mxpl sensor. I think that few P&Cs still have range finders which means heavy battery drain, and glare problems. However the range finder suffers from gordo parallax chopping.

So... here's the first image I tried. I'm impressed with the palette information re. sky to shadows. I've cranked this out so that I can easily print it at 4 feet on the horizontal edge (someone want to convert that to meters?) The dynamic range seems very strong. But ... well... what do you think? It's hard for me to carry this sissy little thing. It seems to challenge my man-hood. I feel girly or amateurish or... well, both. And yet I can see that I can carry it about in my pocket and consequently get image material that I'd never other wise get since lugging my normal kit is a challenge..


BTW.... note the date. This is THE DEAD OF WINTER here in Lancaster County, Pennsylvania. Note the (missing) snow cover! Hmmm...... Yesterday it was about 50 degrees. This may just be a belated January thaw.
Posted by Ted at 11:56 PM 7 comments:

Everywhere I look
I am framing.
You know?

And since everything has
multiple explanations
I try to frame questions.

And if they glow
like windows to
another place.

Then the result makes me
wonder. So that's
what I look to frame...
And finally capture.
You know?

<-Click here
The texture rage is cresting. Im not sure why textures seem to add additional dimensions to otherwise ordinary snapshots. Any thought?
Posted by Ted at 9:23 PM 6 comments:

<- Click here
Hmmmm.... can art be entertainment? If it is, is it then a 'lesser art'? Is the intention to entertain too shallow for a serious artist? Maybe... maybe the word 'serious' is automatically negated by the word, 'entertainment'? Which makes me wonder if I should be entertained by Mozart? Picasso? Tennessee Williams? Fellini?

Here's an image... my image... of a violinist, a woman who is quite gifted. She wields her bow like a fencer's foil. It darts, stabs, dnces, and glides cutting feelings from the air. Her training was serious, so can her performance be entertaining?

Is this image entertaining? The jaws of my camera bite a moment free from the blur of time. And that provides me with an opportunity to express my feelings and thoughts about the frozen instant. So? How much is art, how much is entertainment. Or can it all be entertaining art, or artistic entertaiment?

Particularly when it is an image of an entertainer interpreting art?

Grumble, once again, my head hurts from all of this. Goodnight.
Posted by Ted at 11:12 PM 1 comment:

We have a huge common inheritance. I tend to lurk among the supporting scaffolding.
Posted by Ted at 10:31 PM 2 comments: