Heh heh… Now this is a Technicolor morning in Lancaster County, eh? Caught it and them through my tiny G10 on a bike stop feet away from that last post below. Hardly any post processing in PS4. Some AlienSkin Technicolor tonal intensity. Love the texture and sharp… sharp… sharp depth of field huh? Plus, lookit the dynamic range there. There's shadow and highlight detail throughout. That little camera's a classic masterpiece. Imagine Canon's now up to a G16… this thing's ancient. But it fits in a little pack on my bike, films in RAW and jpg. This image was just a jpg capture! Yet lookit it!
I can't even imagine what the new versions of this baby do. You know what? If you're looking for small carry everywhere camera with all the override features of your top SLR… Go and buy a good used G10. I'm telling' ya… the thing ROCKS! 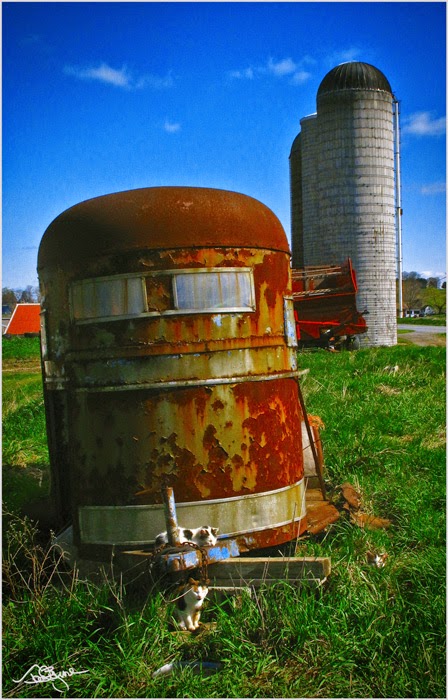 Okay… couldn't resist puttering around with the image. Liked the old, faded feel that this vehicle seems to emanate. Fun huh? 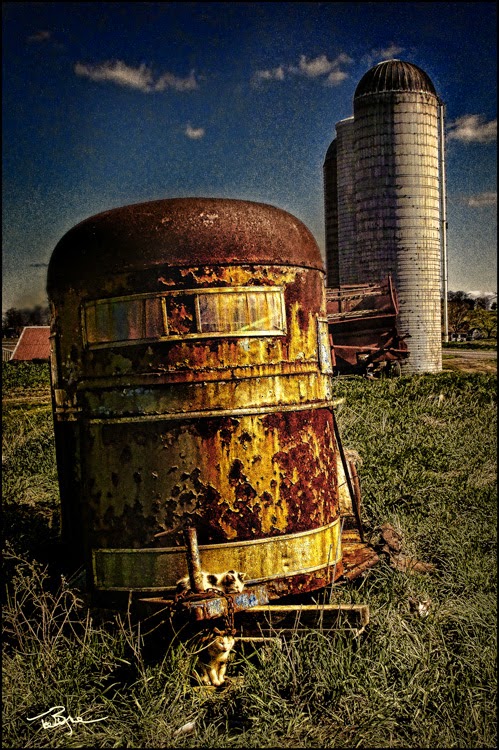 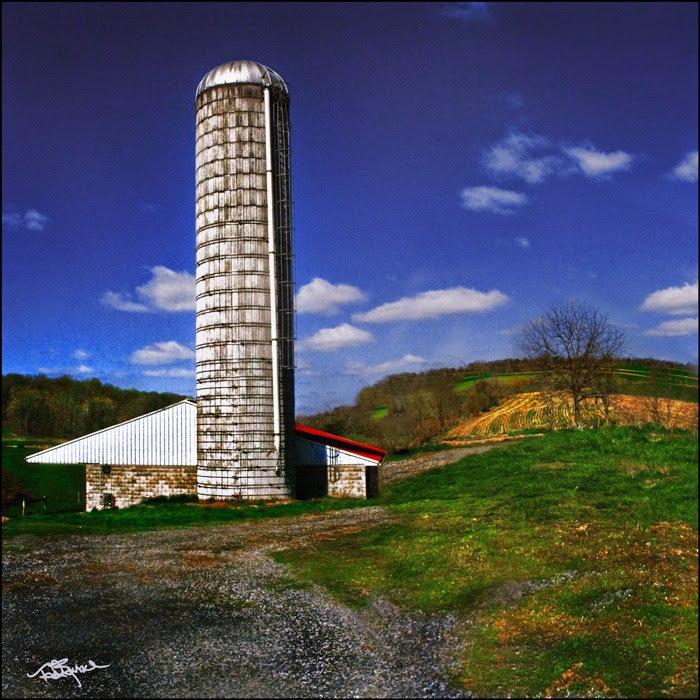 About ten miles outside of Lancaster City into the southern end of Lancaster County we can really see the legendary rolling hills of central Pennsylvania. Spring's come, the seeds are in, but the trees haven't fully budded. Soon all of this will be corn, much to fill that finger pointing into the sky. Life's good, huh?

Oh… I did adjust the dynamic color range here to emulate my very favorite slide film… Agfachrome 100. It was my trusty light little  Canon G10 that caught this feeling. It's all pretty magical, eh?

How magical? Here's the original sort of. In fact this image resulted from stitching together five panels in PS4, then cropping it down to this square. 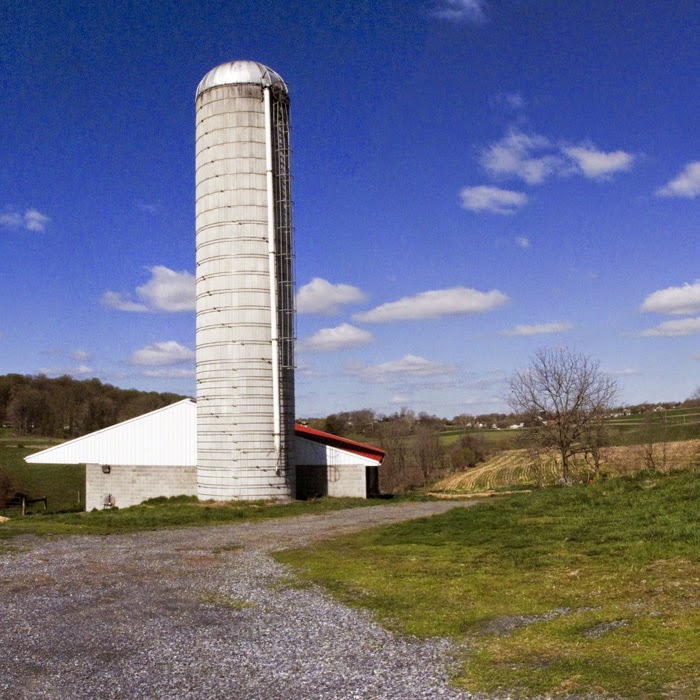 The challenge this time was to create an out-of-the-camera reality in the final version at the top of this posting. I wanted to avoid any sense of "manipulation" or "augmentation". One of the real challenges was the lack of balance from that horizontal horizon. there is too much weight on the left side of the original. I needed more mass on the right. That led to two pieces of process. First a weighting of the tonal and palette range to augment the appearance of more heft on the right bottom. The secondly to grow the hill there on the south eastern quadrant.

but the weight was designed to compliment a setting for the main feature, the silo… To draw the eye, and feeling toward that finger without battling it. Of course I eventually added vignette to once again spotlight  the silo.

Great fun and I'm thinking if the trick's not revealed like I now have, that it sells belief. Right?

Spring's popped
In Lancaster.
It's when young
Men turn
Their thoughts
To climbing
Way high and
Looking down… 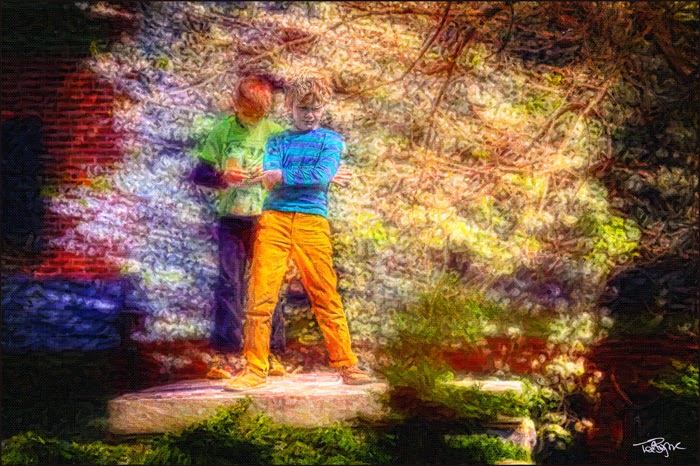 Canon 7D, Canon EFS 70-300mm f/4-5.6 IS USM Lens cranked all the way out and opened all the way up. PP in PS4, Topaz Adjust, and AlienSkin Oil Paint. In the middle between those two tools, there were many layers of adjustment and sniggering around with the dynamic range.

The boys climbed a large wall around Musser Park's entrance in the very heart of the city of Lancaster's historic district, maybe fifty yards from my front door. Not shabby, eh? 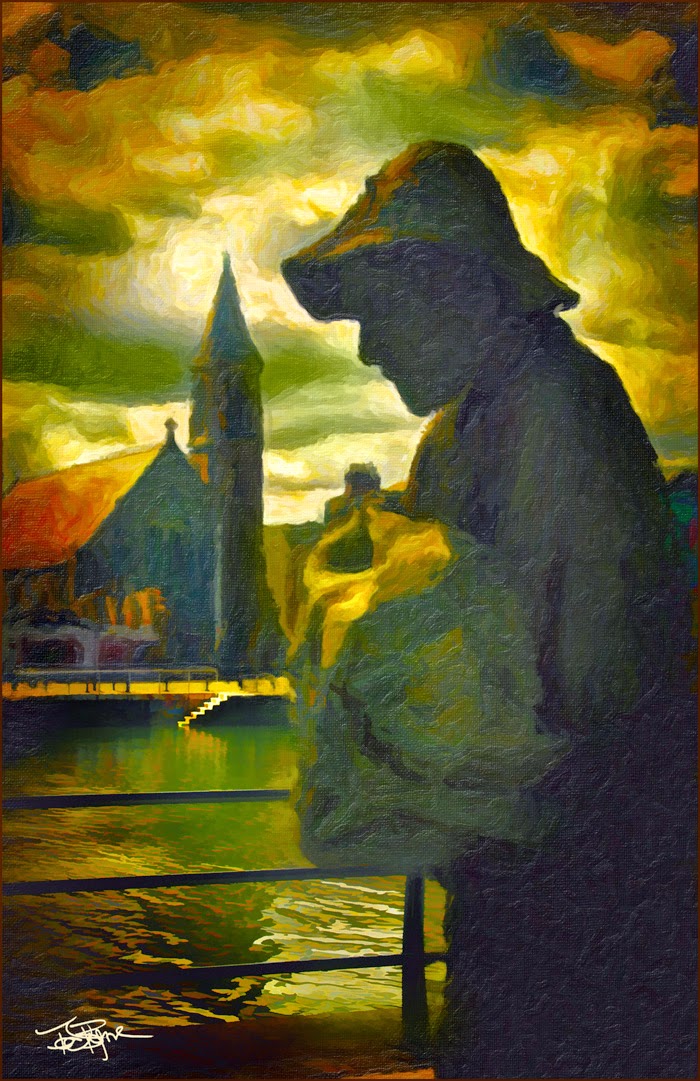 The British murdered a million Irish
Another million were forced to immigrate
When the potato blight killed
The food that absentee English landlords
Allowed their tenants to eat.

It was not a religious war
It was a reclamation.

And now on Court House Quay
Along Dublin's River Liffey
This guy, cast in metal,
Stands enfolding his
Earthly belongings.

Dublin, Ireland. Across the river is The Immaculate Heart of Mary on City Quay in the midst of the city's Docklands. Canon 7D, Post processed in PS4 with Topaz Adjust & Alen Skin's SnapArt oil paint. Custom brushes and textures.  Cross processed with beta version of  customized Alien Skin Exposure 6.