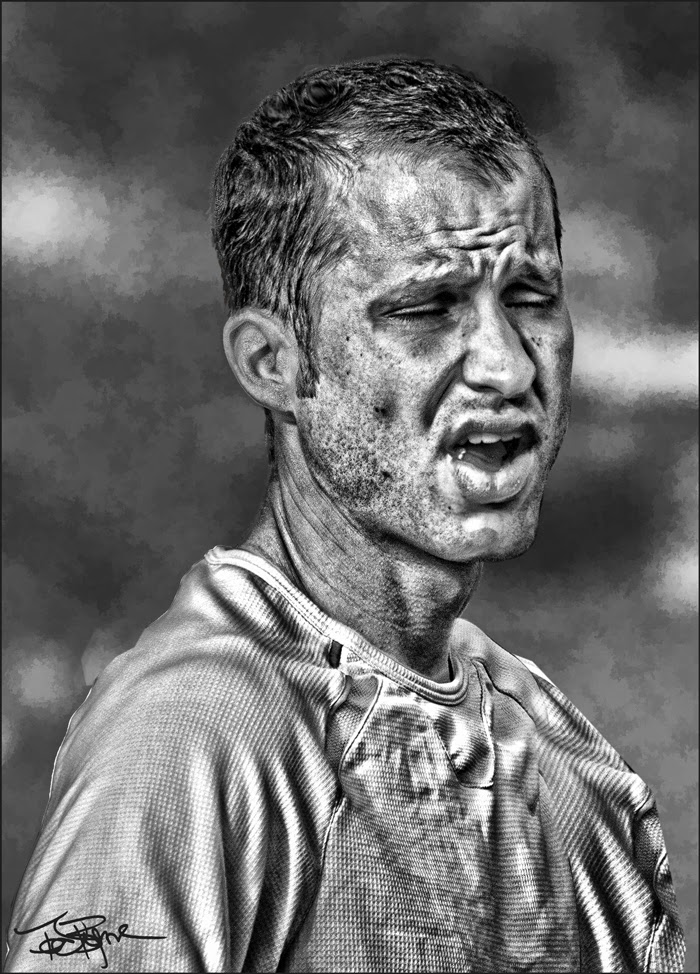 You're not supposed
To Believe them.

You're supposed to
Believe in them.

That's what whores
And politicians

From my Canon 7D through 80-115mm glass. Post processing in PS4 selectively employing a number of custom, AlienSkin and Topaz, tools. All detailing occurred with my own brushes and textures. The colorless hope though wells (and wails) from deep within my heavy-metal skepticism.
Posted by Ted at 2:22 PM 4 comments:

Bill Birch in one ingenious artist. You can check out his fearless experimenting here. The TME Community  has a cool forum where artists challenge others by posting images for visitors to augment and enhance, not so much as a contest but, well, think of it as cardio exercise for your creative chops.

Anyway, Bill recently posted this grab shot (Image 1) for the fun and fortune of his fans…. 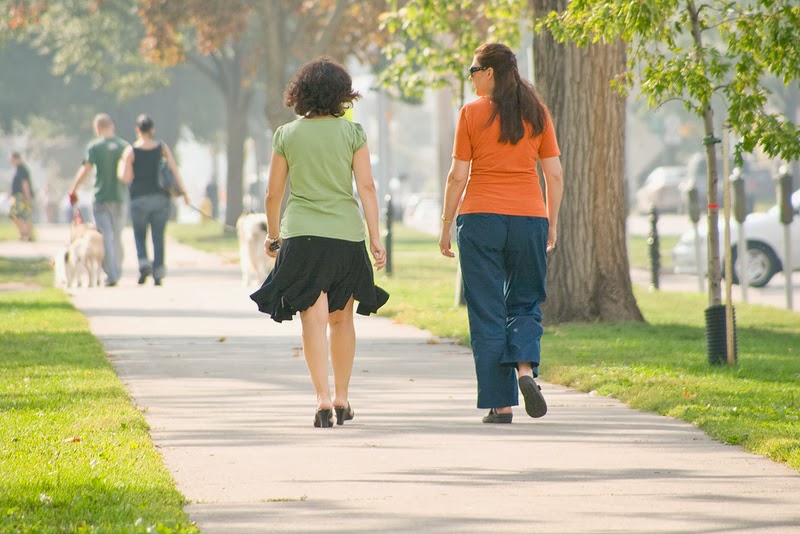 On the up side there's a lot of color, it's level, it's got a vanishing point at the end of that path, and there's some action in that flirty skirt. But of course he gave us no real center of interest or more specifically, there is a school of piranha-like distractions nibbling chunks of attention away. Moreover the absolutely flat exposure doesn't allow contrast to reinforce any central topic.Bill obviously meant to tease us with  an undistinguished, technically correct snapshot, right?

Hmmmm….. Now this is fun. First we need to do major surgery on the southern, western, and eastern quintiles of this thing. They add nothing to the story and distract from it. And then there's that space between the two women. Why? Well, why should we care? And the act of caring about the size of, and what's in that gap is another distraction that's reinforced by the cluttering details between them. So that's got to go as well. Finally the dynamic range, as I already wrote is relatively flat. it gives us no  hints about the relative contributions of the various elements of the feelings or ideas of the artist.

Bill apparently wanted us to make those decisions… to tell our stories. Which brings me to the first surgery (Image 2) incorporating the three elements of cropping, altering the relationship between the two women, and then enhancing the dynamic range to emphasize the composition of an autumn Sunday In The Park. 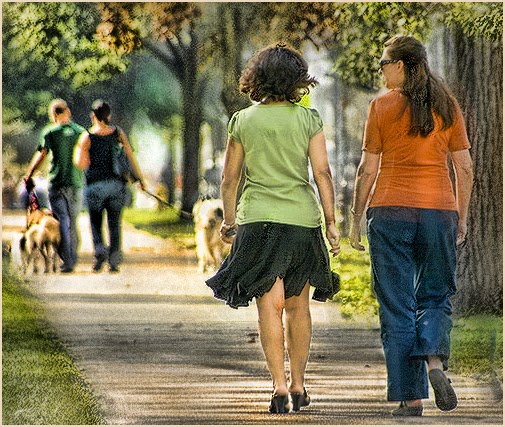 I see the two couples as the main topics but the flirty skirted lady as the relative lead character. Which first called for multiple compositioning tactics, here Bill allowed us to both use the Rule of Thirds AND Vanishing Point compositioning down that pathway. Consequently I've muted the palette around the leading lady and emphasized that skirt. I've also thrown the remaining distractions like the grass, distant trees clutter between the foreground couple, the right hand tree bark, and other details beyond the dog walkers,  out of focus. However, while the dog walking couple was originally beyond the depth of field of Bill's capture, I enhanced their pallet and dynamic range to make them an important element of the image's mood. They are clearly an abstract statement regarding the "parky-ness" of this moment. Right? 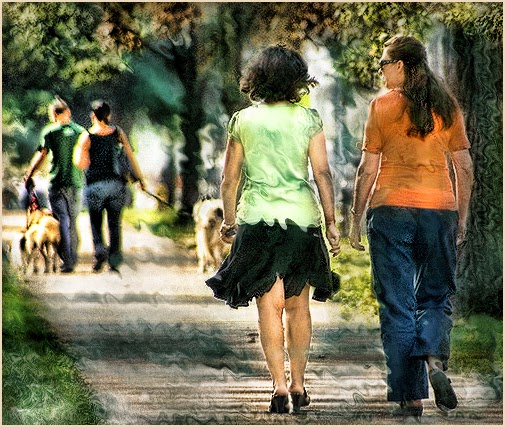 My feeling is that this is now a kind of metaphor for Sundays In The Park. Or better yet, what I wanted to achieve was an archetype… an image that spoke a universal language about Sundays, parks, relationships, and summer. One that would swirl into every viewer's feelings. Not a stereotype or cliché but a feeling about every Sunday In The Park as opposed to this specific one. See I wanted to make this tangible specific moment into an abstract feeling without losing the actual actors. See now how colors are now more pools? And the lighting's a tad blurrier… a bit more in motion? See how details are rendered in strokes of color? This was my final objective. But then it occurred to me that there was another, not necessarily better, but equally useful way of expressing this feeling… So I created (Image 4) 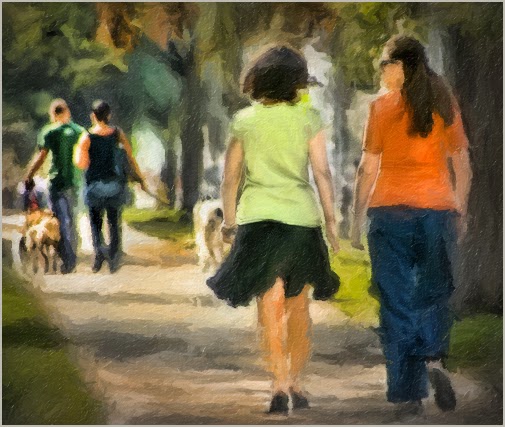 Thinking about the way the great impressionists translated reality into expressions of mood… I recalled seeing the powerful work of say, Edward Manet and his name doppelganber Claude Monet. and how they employed brush strokes of color to suggest feelings for the viewer to build upon. Stopping short of their minimization of details, I went halfway to leave sufficient sharpness to retain a photographic impression, then set to stroking away details which stole from the story of the flirty-skirted heroine of this poem. Oh. and I muted the vibrance and saturation to decrease the "computer" sensation that frequently, overly-brilliant Photoshopped, images seem to have, and I warmed the palette to reinforce a summer-afternoon glow. Now my attention is drawn to her, the breeze, her body language, and the freedom we feel or remember - even if we've never actually done… Sunday In The Park.

Y'think? Thanks Bill. The exercise was intriguing. Hope my approach is sensible.

So I have this, well, ordinary painting see? And what it needed was to be magically transformed into art. So here's the first secret, ready?  Our brains are hard wired to find patterns, order, and the meaning within.Which means if you take a frame and drop it over anything, well, our eyes tell our minds to hunt for meaning inside the perimeters. Sooooo

(1) First whatcha gotta do is put a frame around that painting and hang it in a setting that radiates… MONEY! So what you've got is both the frame that makes people figure that there's meaning inside, and when you plop it into a posh set it whispers to the viewer that the buyer who framed that image has BUCKS! Now that says art, right? I mean when somebody who can buy anything decides to frame then display this image, well see that's an offstage authority who's paid a large price tag so this's gotta't be important art, huh? 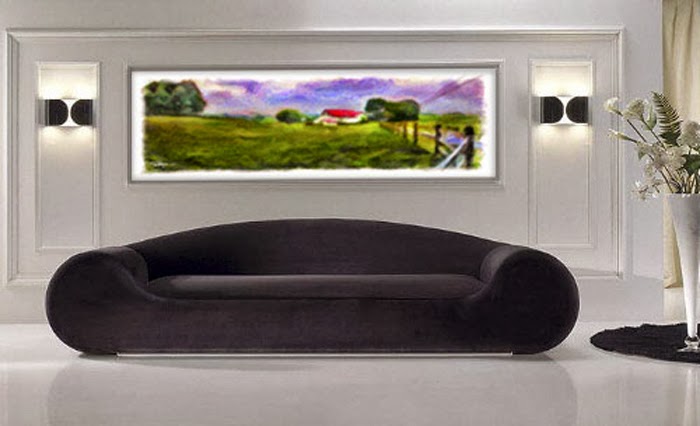 (2) Now, following that reasoning, let's crank up the wealth of the buyers because of the second secret… "perception is reality!" Here the framers hung the thing in a top corporation's board room. Now these members have fiduciary responsibility for the company's owners. They could be jailed if they waste owner money. So they're not allowed to buy cheap crap. Look at the painting now where the strategists and governance of this corporation will look at it as they manage their billion dollar budgets. This image's not just worth money… Hey, if those people buy it… it's worth [b]piles[/b] of money! 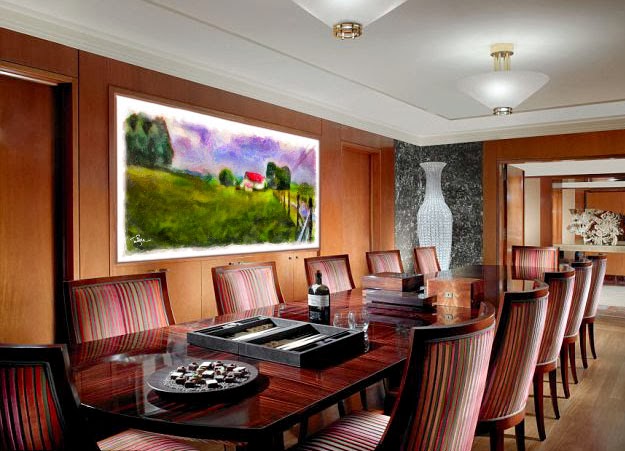 (3) But… but… what do those board room denizens frame and hang in their own richy-rich homes, huh? Why this obviously elegant painting that incidentally compliments the palette with which the top shelf designers have encased this room. That painting's so valuable that the millionaire owners created a room around it. Whoa! 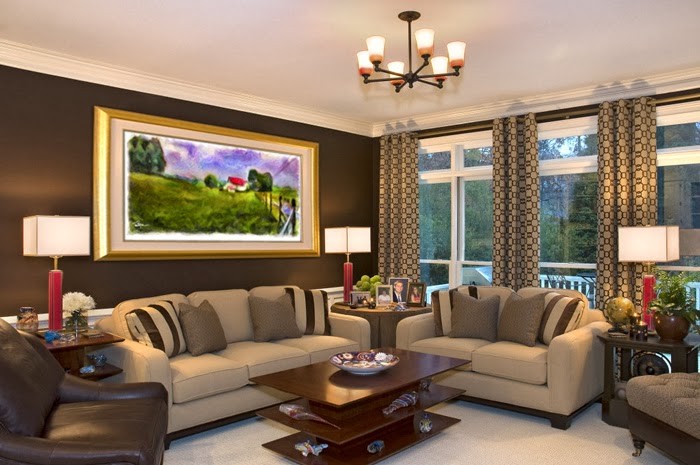 (4) But. if the lower floors in number 3 might be owned by influentials, then finding it hung by the owner of a penthouse overlooking the finest city view must mean that home's only painting's got to have a price as nose-bleed high up as the penthouse itself. This MUST be one valuable creation from a super-distinguished artist, right? 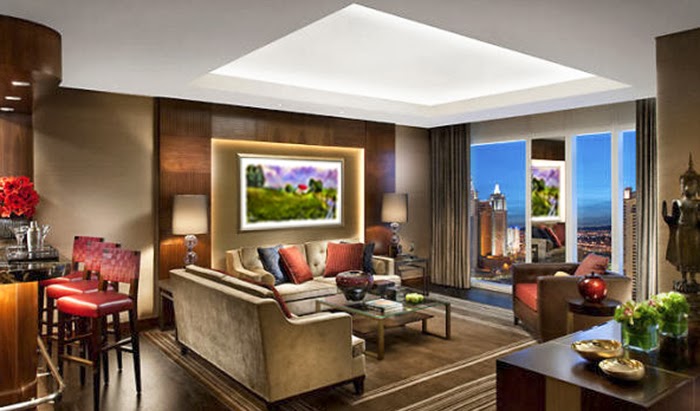 (5) An artist that's so important (and expensive) that he's likely to hang in the waiting room of Gotham's most exclusive cosmetic surgical practice… a room that's got to reflect both the taste of the surgeons and the expectations of their patients. 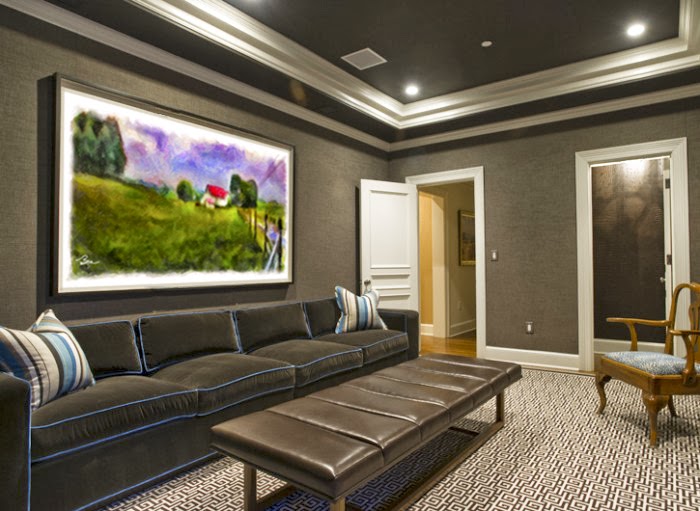 Wuddauya think? If you frame and hang it just right… Is it art? I'm thinking YEAH BABY!  That sucker's a million dollar find. Huh? And that's it. Just frame your work and place it in breathtakingly wealthy settings. Creating the perception of not just art but reeeeeeely, reeeeeely, reeeeeeely valuable stuff. Perception's reality!

No need to thank me, just follow these simple rules then send along one or two percent of your explosively profitable sales, K? 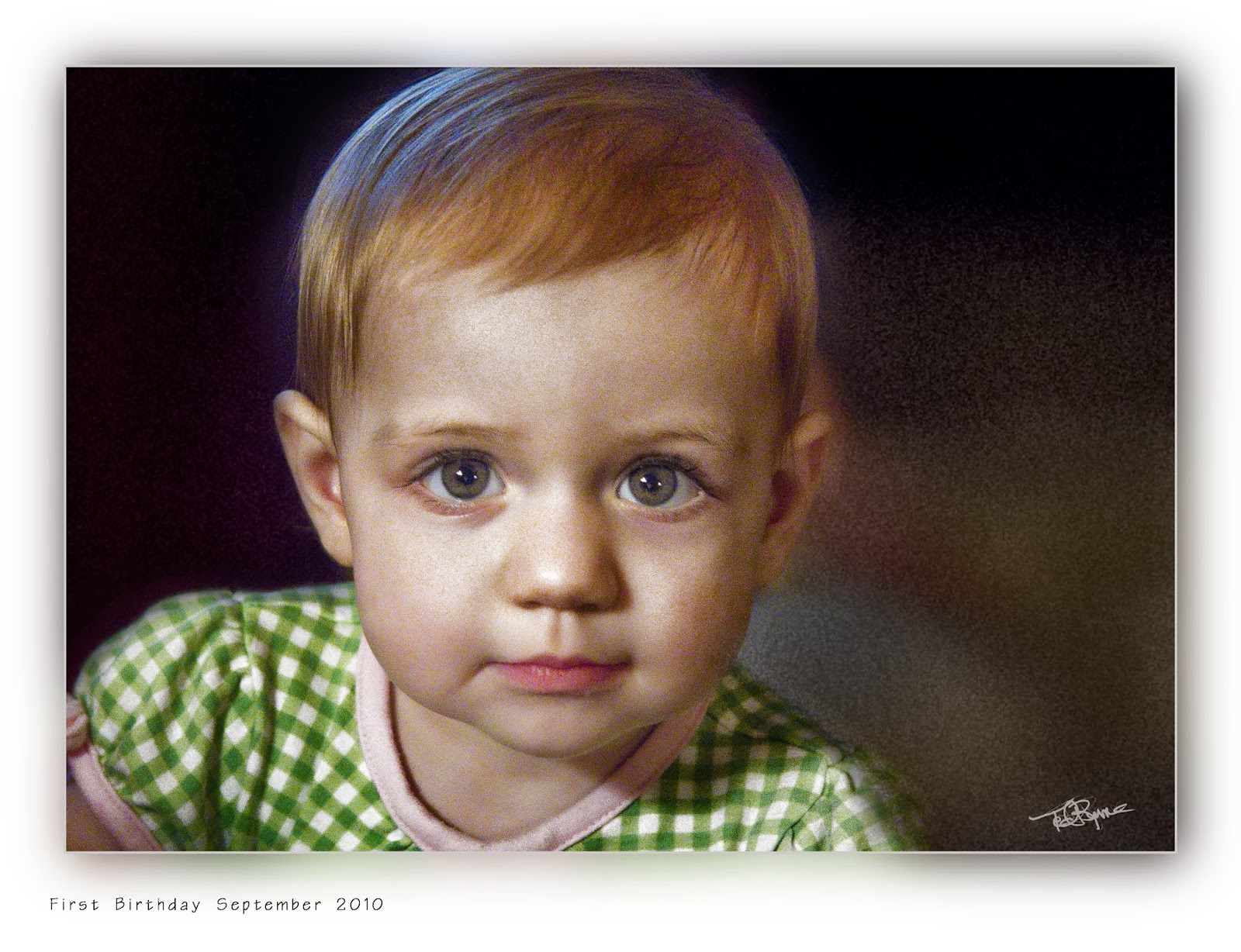 Riffling through the archives as I filed the last group of kiddie pix this one of Katelyn from three years back popped out. Dusted off it looked sort of cool, well not cool… warm. On her first birthday in September of '11 this caught her in natural light through my hand-held normal 17-85mm Canon on the Canon 7D. Yeah the ISO was 5000 but even so the stabilizers in that lens let me crank it out to 80mm and hold it reasonably steady at 1/80 of a second at f5.6 to shrink the depth of field like a cheap cotton sweater in a dryer set to hot.

But the maximum power came from Topaz Adjust through the flexibility of PS4 layer. Look at the detail in her eyes, huh? Those were Topaz supported, painted in through adjustment layers.

You know, this stuff is magical. And in the words of Arthur C. Clarke… "A sufficiently advanced technology is indistinguishable from witchcraft." 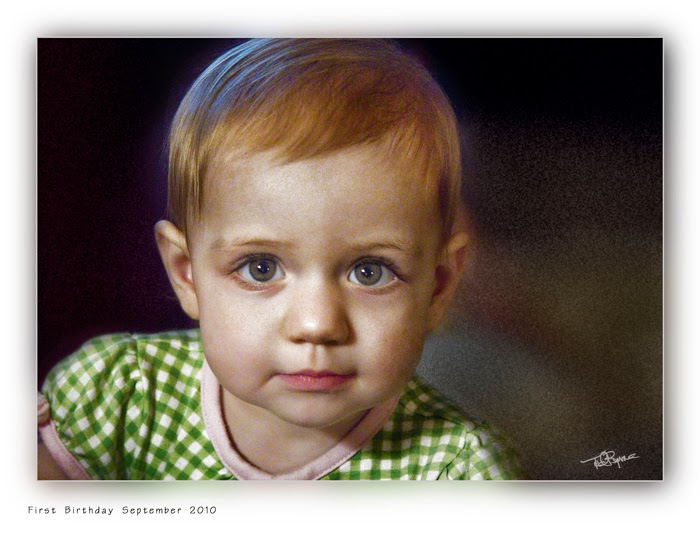 Christmas is over, so are the kiddee pix. Sorry, got a tad obsessed with old fashioned portraiting! Got these two grand nieces who steal lens time whenever we get together. It's not fair…. But this is it… Here's Katelyn for the last 2013 Christmas image. I promise… promise… Well, I'm resolved right this moment. Hmmm… just remembered that we did go to an Irish pub for lunch, wonder what those pix look like? But this page rounds out the equal time with three posts for each girl. No favoritism, right? 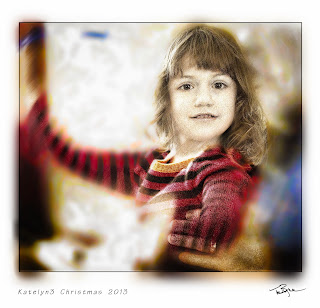 Went low key with the last image of Samantha so rethought high key here with Katelyn Once again I hand held that long  Canon EFS 70-300mm f/4-5.6 IS USM Lens screwed into my Canon 7D. But I turned off the stabilizers and went after the blur of the kid's effervescence. Lotsa grain when you crank up the ISO into the thousands. But I like the gritty authenticity of it. Tricky metering with the window in the background. Which led to the high key concept.  Wuddaya think, all little girl, right? 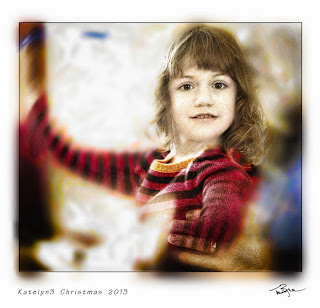