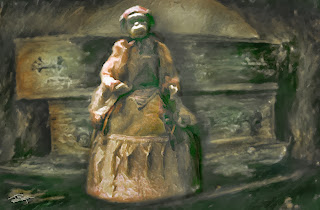 Time leaches
The extremes
Of life
From our
Memories.

Surely you've noticed the space around a gowned monkey distorts? My Canon 7D did through its Canon EFS 17-85mm (f4-5.6) when I stood him in front of stacked - and filled - Dublin coffins. Then in PS4, I worked the feelings through AlienSkin's SnapArt4 so that the scene dangled like the string on a surreal party popper - that no one dared pop.
Posted by Ted at 10:10 PM 2 comments:

The Nature Of Things 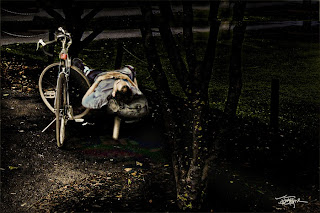 The nature of things
Even when they're
"Good for you"
Is that if you push
Them hard enough
Eventually
Nothing happens.

Caught with my Canon 20D through a Cannon EFS 70-300mm f/4-5.6 IS USM Lens then massaged in PS4 employing AlienSkin: Adjust 5 to evoke my own custom modification of  Fuji Velvia 50. I know, this slow slide film was usually avoided by portrait photographers, but I loved it for its spooky brown/yellow shifts that created a dreamy antique patina in naturally lit night shots. Of course this wasn't one of those, well not before its PS4 massaging.
Posted by Ted at 11:53 AM No comments:

Before He Was Baaad! 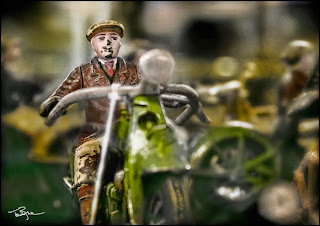 Once some boy
Played with this guy
And never imagined
A Tattoo.

Look at this image….

Here's the obsession of a control freak… um… Me!

Recently I grabbed this snapshot through my Canon 7D's  EFS 17-85mm (f4-5.6) at a tag sale in Adamstown. His tie and hat snagged my eye. I'm guessing this lead toy's from what? The 1920s? 30s? Colors in the group were still so vivid. Then look at how manic I got. See how I augmented the image to hijack your attention with all the subtlety of a performance by Mylie Cyrus to make you stare at one thing. No… no… not a tongue :-)

See all those vector lines? See how they highlight streaks that both end and grow brighter around the circle of the rider's head? Vector A in particular uses the price tag's string to start the effect. See how the depth of field's been dickered with as in Circle B to leave just the rider tack sharp? See how the outer edges are all vignetted so that the brightest dynamics all pop along the power point described by the red -  Rule Of Thirds grid -  I've overlaid?

YIPES! This is craft gone carcinogenic. Couldn't stop myself. Even the palette's been created to become most vivid around that northwestern power point on the red grid. Hot reds and greens explode both along that western vertical grid line and at the power point, meantime the setting fades into a warmer stew of yellows.

I felt driven to tell the story that this guy told me, about a time before bike riders were baaaaaad! 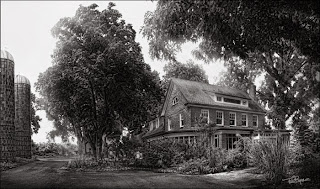 Now isn't that pretty? Just, well, perfect? Look… look how the glow streams from the northwest, streaking through the leaves. Look how it startles and ignites the crisp blades down there on the southeastern corner. And see… see the lines in the farmhouse sharp enough to shave a starlet's legs? The hues range from coal black through platinum.

And look how there's absolutely NO MEANING, NO FEELING! There's neither passion nor thought.

When I saw this place I felt its age. Felt an almost spooky aura that built up over maybe a couple of centuries? Felt the way those silos in the west balanced the prosperous size of what may have once been something close to a middle-class mansion. Here was a fruit of the farm.

But… but… the image shows none of that. Instead it's an absolutely perfectly assembled piece of craft. And you know my feeling about that? "Art without wonder," I've written, "is merely craft." Damn… I have the skills to do this and no more… With this thing at least, here's what skill without talent looks like. It's pretty. It's perfect. It glows, it ignites crisp blades… but not ideas or feeling.

It's been so long since I've  even considered doing B&W that stripping away color is like… like Joan Rivers' humor stripping away sex. It seems wrong to surgically remove zillions of hues. From roughly 1957 through 2003, my work was overwhelmingly done in wet, monochrome darkrooms. Digital liberated me from those rooms and the prison of two color imaging. Yesterday I bought Topaz B&W Effects 2. It's a delight to use. You can see its power up there, right on that picture I grabbed with my Canon G11 on a recent bike ride. The thing is, that stripping out the color seems to strip away something else: Wonder.

Because I Could.. um… Can 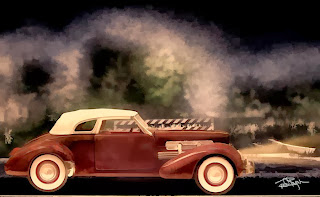 Out on my bike. Grabbed the background road to nowhere. Idledf my 1936 Cord 210 in front. Thought about a pulp comic book. You know… Meaty hardboiled Dick in a battered fedora on top, a Smith and Wesson .38 underarm, and in between… shoulders done by the same firm that designed Stonehenge.

I'm imagining he's off hunting a corpse on the other side of that striped barrier. Wuddaya think? Can you hear the purr of that motor?

Hey, if this is a turkey… well… Happy Thanksgiving…

Oh… this is a test of a new tool I bought last night..The Topaz B&W Effects 2. Uh-huh…. a device to make monochromes sing. But oddly, it allowed me to layer in this effect over my image idea. I like it. You'll see more.  And another "Oh"… The image is from my Canon G11. You know the Canon G series? They're probably up to G-14 or G-15 by now. Still this pocket classic of mine is sooooo powerful, produces full-range RAW images, and it has an optical viewfinder so there's no need to depend on one of those external dorky LCD screens that get wiped out whenever the sun's behind you. And since you almost always want the sun behind you… It's probably the only compact camera line that's useful in daylight. If you can find a good used G11 online… leap on it. They are magical. 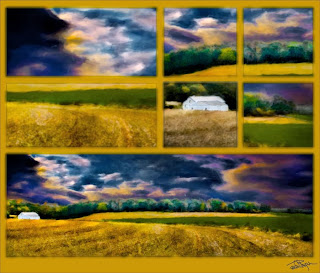 There's a problem with this internet thing. Technical really. We have the power now to imagine and then make burley panoramic images. But we don't have the power to display them on these tiny monitors.  I've imagined here a massive fall pastoral… over six feet on the horizontal edge… A massive piece of nature plucked from the card of  a tiny Canon G10. But… how to display it?

In details. Uh-huh… detailed repetition allows the pano to condense accessibly so that it's no longer a tiny-thin long… long… strip. Instead we can appreciate it while examining its parts.  Of course I guess I could buy a six foot by three foot monitor.  Um, well if I could buy a monitor like that, I guess I could also easily purchase a Bugatti Veyron. And if I could afford one those.. Hell, where'd I find time to fiddle around with a camera? I mean, I'd be private jetting between yacht ports… sigh.

Meantime, I biked around the rolling hills around Lancaster last weekend, grabbed this six frame pano, stitched it together in PS4 and sprinkled AlienSkin SnapArt4 magic all over it. Then I grabbed details to turn a horizontal into a monitor-filling rectangle.

And you know what? The result feels as if the technical's overwhelmed the romantic power of the season and the moment. I'm thinking that form's conquering function.. and craft's overwhelming wonder. And art without wonder's merely craft. Grumble…