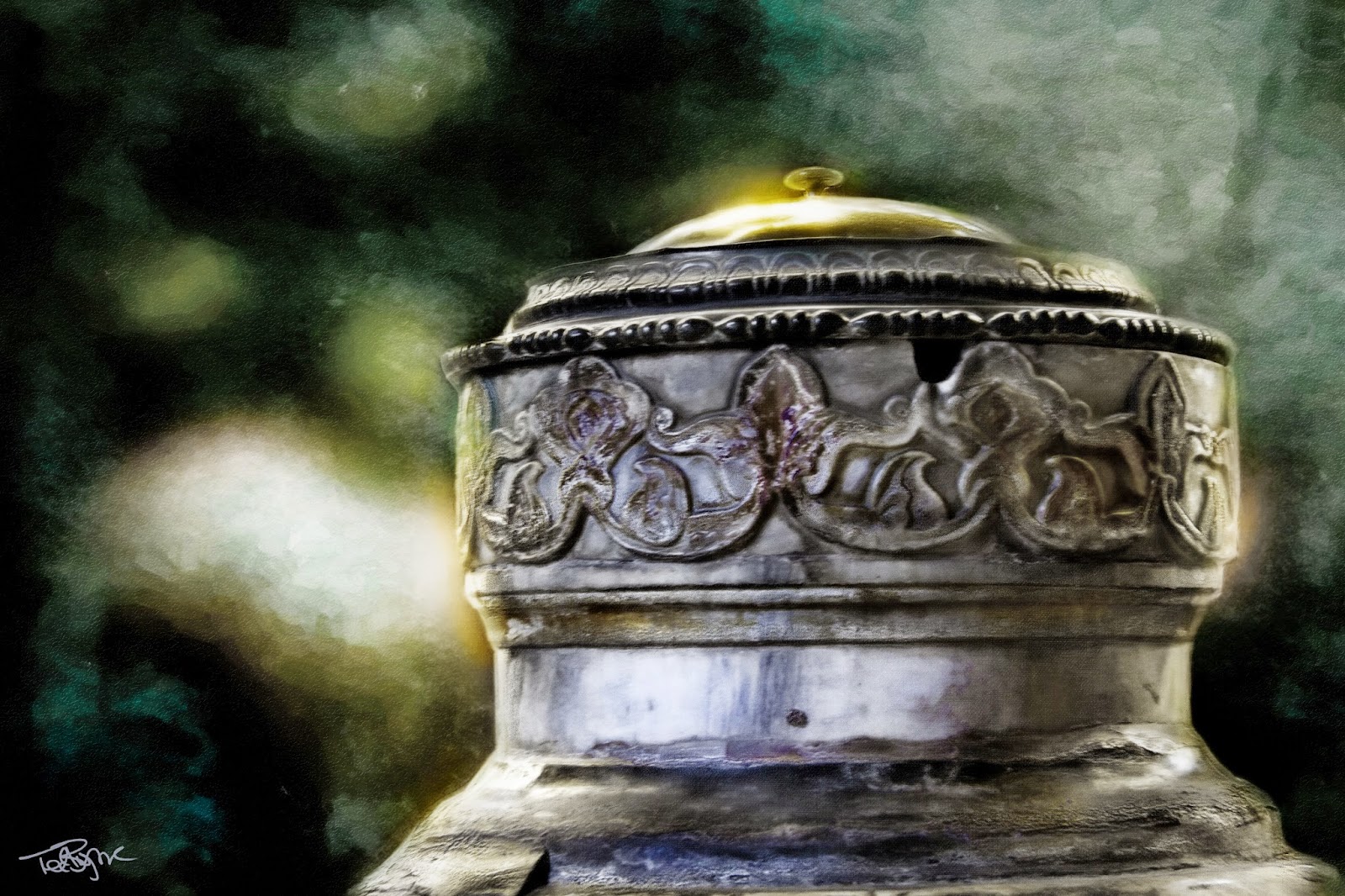 This sits in Istanbul's Hagia Sophia. Well actually it sits atop a marble jar brought, along with its twin, to Istanbul in the 15th century by Murad III. It probably sat outside for more than half a century before that in the ancient Roman city of Pergamon on the Western tip of Greece.

It's a jaw-dropper... A huge thing, some six or seven feet tall: an urn carved from a solid block of marble that was used in lustration ceremonies.

Yeah, I had to look that up. Seems they filled these things with oil to create magic circles around infants during naming ceremonies. The belief was that evil was banned from the circle while goodness flowed in. A lot like baptismal ceremonies. You could get a big guy into this thing, with room to move around. Well, not that there was any need to cram a man into it, I'm just saying.

Now it sits in the Hagia Sophia where it's been indoors for another 500 years or so, protected from the weather... First in the Sultan's great mosque, and now that it's been converted into a museum, it's part of the collection of ancient Muslim and early Christian artifacts which the Turkish people maintain for all of us.

Recently Tom Dills asked some questions about the permanency of art, or at least our photographs. He mused about photographer and editor Bruce Jenson's essays on the topic. Bruce has often wondered about the eventual fate of this stuff we do... Well, the stuff that he does and by extension, what we do. Simply put, both Bruce and Tom wonder what happens to the photographs and art we've created when we die.

Which led me to wonder about the Lustration Urns of Pergamon. Did the designers/carvers of these things expect that a millennium or so after they stopped chiseling away stone that people would still wonder at their beauty? Or was the respect their work generated in its spiritual usage sufficient psychic reward. I guess that someone gave them some sort of direct economic payment for their efforts. And I also guess that, like artists always, the sheckles they got felt like too few.

Do you think it's the scale of these urns or their marble, that guaranteed them some sort of lifespan longer than their creator's? If they'd built them out of pixels, I wonder if they'd survive the winds of technology much less fashion, caprice, war, weather, and the tantrums of human taste. Understand, our photographic art is stored in the least permanent form ever imagined. Recently I tossed dozens of 78 RPM classical records of my father's that were created in the 1920s. I have no way of accessing their contents. I'll soon follow them to the trash with dozens of audio recording tapes which need reel-to-reel playback machines. And a lot of Super 8 and VHS family movies will follow them. Do you imagine that your carefully preserved images residing on virtual clouds somewhere will be any more accessible than the stuff you may now have on 8 Trac Tapes, cassettes,or even on CDs and DVDs? 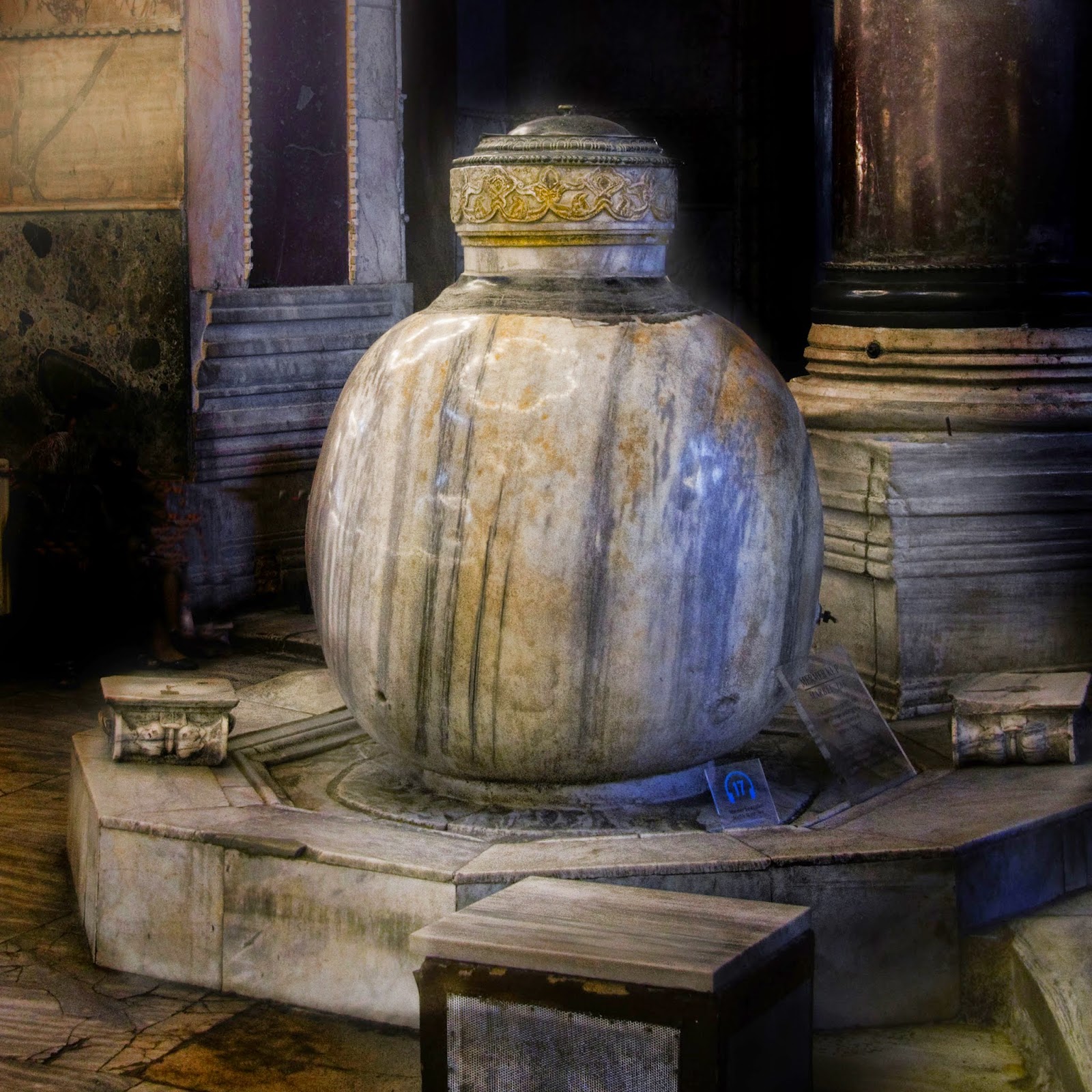 Emily Dickinson had the advantage of "recording" her thoughts on paper, so that they were easily accessed so she could be "discovered" after her death. Imagine if she'd dropped them onto floppy discs?

Forget the "quality" of the work, what's "permanent" art demand? Not merely high levels of imagination and creativity, but some impermeable strata that can withstand time's vandals. Oh, and it probably should be big... like this lustration urn... Huge enough... to get noticed, right?
Posted by Ted at 7:23 PM No comments:

Recently someone asked about a journalism degree. And I replied that journalism is an activity, accomplishment is what it documents. The activity’s incidental… Secondary… Unessential. But in other circumstances, the activity is necessary… inseparable… ONE with the accomplishment.

In this case here, I’m the photojournalist… This guy is a master glass blower at Ireland’s legendary Waterford Crystal. Which means he’s among the world’s best, perhaps one of history’s best, at accomplishing with his mastery of process. Something a journalist cannot do.

Not only won’t journalists admit this: Most don’t know it.
Posted by Ted at 8:44 PM No comments:

See that road sign there on the left of this image? It points to Blarney Castle. This little town square is almost in the shadow of the old ruin. Well, maybe not a ruin. The place isn't habitable but it's sure well preserved given the hoards that come to kiss its stone. There were more Americans, Canadians,  and Australians walking these streets as I meandered about  than Irish. Tourism's a MAJOR industry on the island.

Regardless of the stuff we come to see, Blarney's a great example of what's just beyond the snapshot frames of the 17th century stuff. It's where townsfolk come to shop in 21st century wagons. I like that. This could be Lancaster's town square, or the centers of Blue Ball, Paradise, or Intercourse. Well, maybe not. In fact, our squares are gridlocked with Amish horse carts. Hmmmm....

Odd I travel to the olde sod to scratch my ancient Irish roots and find towns that are more modern than my own. There's some kind of lesson there, right?
Posted by Ted at 5:29 PM 1 comment:

For over a century he's stood in front of the original Rhinebeck Smokeshop. So I took his picture. It felt mandatory. So did the shop window's wooden frame. Okay, so there we have it. Form, shape, texture and... and.... Meaning?  Now there's the rub. I notice that images demand to be made.
Have noticed as you review your day's catch that there are dozens of inexplicable things that drew your attention but you've no memory of what lured your lens? Some will sport a magical palette but no subject. Others have strong form, strict framing and yet... no concept... no story arc... no meaning quivering to be released. 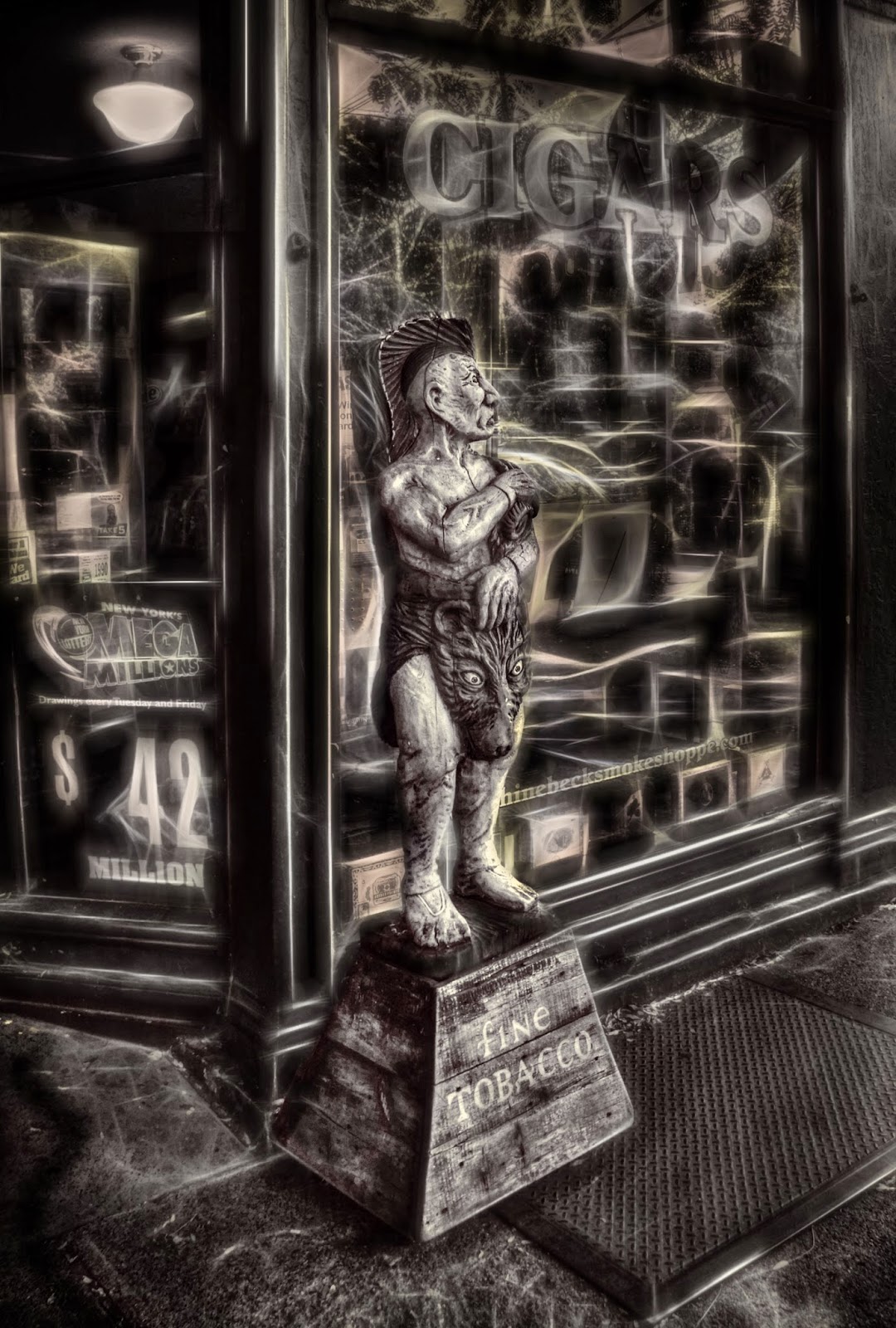 I envision every image that I work through to an end... Envision them as prints. Ideas or feelings to be hung and lived with. Stories to be expanded each time my eye returns to them. Of course there's no room for all of those framed feelings and narratives. So, what to do with them? A book perhaps? Or just slid into folders that gather digital dust inside of cavernous HDs. Is it miser's pleasure we get from running our fingers over the value, pulling out this or that to enjoy? I mean is it like the miser who gets kicks as handfuls of gems drop from his fists under a single light in a darkened vault-room?

When Degas finished a watercolor, what then? Did he care about anything that carried the punctuation ... 'finished'? What about Whistler? Or Hopper? For some years I did daily TV commentaries. We recorded a week's worth all at once. I never watched them when they aired. Why? Because that guy up there on the screen could affect my life. By the time of airing, there was no further opportunity to edit, change, or fix the product.

Viewer mail pointed out any errors... So in a lot of ways I was trained to release my creation into the wild, and go off on another hunt. The process became the challenge, even more than the result at the moment of broadcast.

I wonder if I'll revisit the indian up there? And if I do, have I already sucked all of the surprises and meaning out of the thing? My friend Cedric Canard tosses his images away. I'm guessing he's not got a cigar box full of prints? Neither do I anymore. Not since I left my wet darkroom, never to return. Instead the box exists on a cloud where it's filled with wriggling binary strings.