Florence 5: Andreas And The Duomo 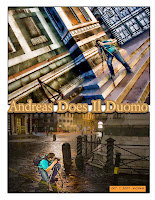 ><- Click here
Pisa, Sienna, Rome, & Florence seemed to quite hate one another throughout the history of the Italian states. They were rivals both on the battlefields and in their architecture with each vying to build the grandest cathedral, or duomo. By the mid 1200s, Sienna and Pisa had won - a fact that grated at the increasingly prosperous Florence. It motivated them to replace their crumbling nine hundred year old church of Santa Reparata with what for centuries was to become the grandest cathedral ever seen - the Basillica di Santa Maria del Flore: Il Duomo. Designed in 1296 the last touches to its facade were completed in 1897 - some six hundred years later! Its massive shape, capped by the largest masonry dome ever constructed, looms over Florence.

While Andreas Manessinger had visited Florence before this morning of October 7 it was my first full day in the city. As you may recall, we agreed to meet at Il Duomo for a picture shoot at dawn. Beginning there, we then decided to work our way down some five blocks to the Uffizi Gallery and to the wonderful Ponte Vecchio bridge which sits just beyond it. As you can see, Andreas works with a tripod while I prefer handheld shooting. Consequently I tend to move much more swiftly and travelled through the ancient streets ahead of my friend.

BTW: See those doors to the left of Andreas in the lower picture? Those are the famed Gates Of Paradise entry to the Duomo's baptistry which were originally made from gold in 1440 by Lorenzo Ghiberti..
Posted by Ted at 10:01 AM

Grins huge how fun is this....delightful and I hope he smiles when he sees himself as you see him.....lol... and I could comment without a problem tonight sooooo musta been my browser acting up.