Pity that Senator Sanders won't come out of his shell :-)

He spoke flames to this crowd who began hot for Congressional candidate Jess King. There is nothing more American than a summer stump speech from an explosive orator who's scattered facts onto a bed of bubbling emotions. The base is entertained, informed, and cranked to a pitch to, well... pitch for anyone this guy likes. Sanders is a missionary for his ideology.

While a partisan wants to grab power for a party, an ideologue seeks to focus power narrowly toward a cause. Trump and Sanders are both ideologues and each has a base of believers. Ideologies are similar to religious doctrines. At some point unanswerable questions are satisfied by belief. I was once a progressive liberal, now - not so much.  But recollections are tickle-able.

Yeah, the crowd tickled my golden memories of solidarity, hope, and faith. I could feel the shoulders, smiles, and heat of unknown friends crowding against me from rallies past. Here's a community of people bound by wants, needs, and desires. Do they all agree? Mostly - well maybe not the unknown sign holder up above. And who knows - if the devil is in the details - there probably are a bunch of micro disagreements among these folk. But they were making memories aligned with mine. 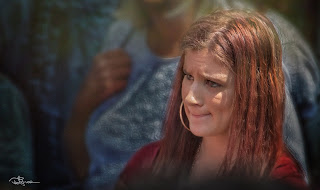 There was logic here, and facts... but overall there was feeling. Maybe. by the time you're visiting this cluster of five posts, you'll know Jess King's and perhaps even Senator Sanders' futures after the November 2018 elections. Maybe you'll care. One thing's certain - this lady above, and her sister-in-Sanders/King below - will... care deeply.

POSTSCRIPT: Since I posted this series an election was held and the candidate that Bernie came to support in Lancaster - Jess King: A Democrat for Congress -was crushed by over 50,000 votes by Amish-born Congressman Lloyd Smucker in November of 2018.