And the beat goes on.

Street portraiture's a bit like fishing. I cast my lens into a pool hoping to catch a prize... Something worthwhile. There are two kinds of artistic images. The first is a question, the second an answer. Oh, ok... maybe there's a third - the image which both asks then answers. Frankly, answering questions is above my pay grade. Personally I feel that asking questions is what the best art does. Answering can too often become a polemic.

So I look for questions that each visitor to my work answers alone.

The first in this series set the tone for the questions that occurred to me on May 5th. Here's another, more will come and perhaps the entire set may contain an answer. Synergy happens when the whole becomes greater than its parts. When each sentence is a question, perhaps the impact of the essay is what Sextus Impericus invented maybe 2,200 years ago? You know, a set of questions which while each is seemingly unrelated the whole allows inductive insight?

Truth is revealed from the bottom up. Now don't get me started on "truth" - OK? 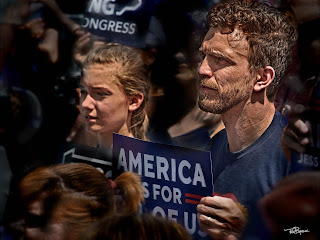 What can we conclude from this man and young woman? He wears a wedding ring. They each carry signs... His read, "America Is For All Of Us", and her's "Jess King For Congress". Each of the signs were given to early arrivers, but no one had to take them. Bernie spoke as I grabbed this image. They were rapt, nodding to his points. Can we tell more? He wears a fashionable stubble. Her ears don't appear pierced. I'm imaging that this is a father/daughter pair, their jaw and cheekbone lines suggest a familial relationship. Can you find more clues? Their expressions are serious, attentive. Awaiting Senator Sanders, they'd stood and squinted into the sizzling Spring sun for hours.

GEEK STUFF: Same equipment as the first in this series. However the afternoon's sunny contrast pulled me to use Alien Skin's Exposure 4's powerful emulation of Kodak Ectachrome EES to take advantage of its saturated palette and low contrast. It's was a workhorse film with a tiny grain structure and reasonably wide tonal range at low ISO (ASA) settings. Plus my 300mm lens permitted a sufficiently narrow depth of field to pluck my subjects from the large crowd surrounding them.

I don't follow news, I know nothing of politics and I have never voted, not out of laziness but because I consider myself far too uninformed to differentiate between the political parties and the promises made that rarely ever seem to eventuate, plus, in all my years of living under different governments, I have never noticed any differences in my life that I could attribute to whoever was in charge. This could well be a failing on my part but that's how it is. What never fails to astound me however, is the way we are all sitting in the same theatre, facing the same cinema screen, with a single projector in the projection booth, and still end up watching different movies.
About two years ago I started work on a multi-million dollar project as an ICT architect. It was my first day sitting with the project team, eight of us in the pod. I was focused on my work, headphones in my ears, when I noticed that something was not right. Two women were teary eyed, two men were looking solemn and shaking their heads, the rest had stopped working. I took out my headphones to hear one of the women say that she was going home to be with her children. The other said she would do the same which involved taking her younger kids out of school. One of the guys talked about needing to reassess his life and figure out what was really important. In my head I was thinking alien invasion? nuclear Armageddon? bird flu pandemic? Well, no, none of those. Apparently it was some old geezer with bad hair getting elected president.
Anyway, without wanting to get into that discussion (having nothing to say about it), I would suggest that your photos will raise polar-opposite questions and equally polar-opposite answers with viewers of political persuasion. For me, as you have provided a political context for your image, I find myself focusing only on the rather nice way you have isolated these two people from the crowd. The balance between light and shadows on their faces is spot on. But my complete lack of political nous, makes me unable to connect emotionally. The portrait in your previous post, on the other hand, which I looked at before reading your post, had me wanting to meet this guy and discover what his life story was. Like I said, we seem to all be looking at the same screen but seeing different movies. It's like a quantum mechanics double-slit experiment on a macro scale.

Perhaps in this case we are viewing exactly the same movie. I hope that you'll notice that as this photo essay expands that there is no political conclusion - at least not an ideological one.

Once I taught economics. It was my goal to make it unlikely that my students could identify an ideology underlying my presentations. It's my belief that it's an educator's job to present ideas, while it's a polemicists drive to represent them. That's also been my approach to journalism (as opposed to opinion essays).

These images are character studies. The questions they ask me isn't about their politics, but rather their lives. If, as the philosophers say, a man is the sum of his ideas... then I'm fascinated by our commonalities more than our distinctions. As you'll read later on, the street photographer's challenge is to find the commonalities among the trees which define the forrest.

Diane Arbus did not take pictures of freaks. She made images of neighbors.

If journalists had remained as you describe, I might still be keeping up with news events but alas that is not the case.
I do not deny that your portraits are character studies, and excellent ones at that. What I was getting at, rather badly I realise after rereading my comment, is that a portrait shot within a context, either actual or implied, will largely influence the viewers experience of how that portrait is perceived. Especially when that context is divisive like politics or religion.
The fact that you are the kind of person that is "fascinated by our commonalities more than our distinctions" is one reason why I like visiting your blog, because in my experience, a lot of people like to think of themselves with having that trait but few actually behave like they do. Of course the fact that I think this could make me nothing more than a pretender as well. Maybe that is why I find portraiture so difficult to do. You've given me food for thought.

I was, in this case, a visitor to an event. Regardless of the passions which may arise from its participants, I tried to "cover" it dispassionately. I wonder though if it is possible to record the 'facts' of the event without triggering the illusion that I'm taking sides? Suppose, for example, that a sensitive photo journalist of the 1930s had come upon say a Revivalist Meeting in America's deep south. And, as an outsider had simply sampled the various participants through his/her lens. Would those images be of any historic use?

Senator Sanders and President Trump seem to lead revivalist meetings for their faithful. In the future people may wonder about the passions of the faithful and who they might have been. We can somewhat answer both of those questions without engaging in polemics... But it's hard. I'm guessing that a large percentage of people who come upon this 5 part series would judge my political commitments, but would they have similarly judged my sectarian commitments if I'd done that similar essay of the revivalists above?

Does the viewer want more than the aritist/photojouralist can deliver? Does the mere chronicling of summer stump event identify the politics, ideologies of the photographer? Since I was there, am I more than just among them? Hmmmm.....