So? Is Bernie Sanders controversial or mainstream? Izzit possible to be both? Who decides whether something is "controversial". To some President Trump is controversial, other find Mrs. Clinton leads their list of controversial folks. By the way, is there something wrong with being "controversial"? Is that a negative label? Miriam Webster defines controversy as, "a discussion marked especially by the expression of opposing views." And "controversial" the dictionary define as, " Of, relating to, or arousing controversy." Are these bad or even dangerous things? 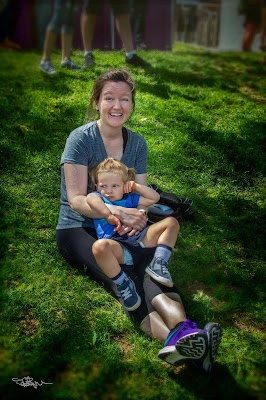 I'm going to guess about this happy mother and child that, even if she finds Senator Sanders, controversial, that she neither finds him bad, nor dangerous. Mothers rarely expose their babies to hazards. In fact, to the degree that she finds the Senator's views to be in opposition to others, they don't seem in opposition to hers. Hence - there's no controversy here. Yet, someone has defined this Senator, the present President, and the views of so many others to be controversial. Who are the labelers?

Yessss... there are people strongly invested in Senator Sanders and Jess King's views. And frequently they represent groups to which they belong. For example the enthusiastic lady above wears a tea shirt sporting the emblem of the American Federation of State and Municipal Employees (AFSCME) union which feels changes in legislation or the courts might be difficult to deal with.

Nobody likes change. Many hopefully endorse it, yet find its disciplines uncomfortable. Hope's a fragile business plan. Now I'm not writing about trends here... Trends are like the ocean's currents that move things along in a kind of predictable way leaving lots of time for, well, assimilation to a trend's dynamics. It's when people notice changes in trends that they go like, "Huh"?

Then they wonder where their world's going... or went. Irving Kristol, wrote "The leverage of ideas is so immense that a slight change in the intellectual climate can ... twist a familiar institution into an unrecognizable shape." Which is when people wonder, "Where's Waldo?" What's happened?

Political rallies can be about groups or individuals... Forests or trees. It's the trees that I like. The emotional waves that beam from faces: each telling a separate story. Here's an exercise, click on the image above then plumb each expression and let it plop you onto a story arc. I  learn the most about forests when I pay attention to the trees.

Niccoló Machiavelli, the father of modern political science, taught his Prince, "Whoever wishes to change the government of a city to his whims and wants it to be accepted and to maintain it to everyone's satisfaction, will have to retain at least the shadow of the ancient ways, so that to the people nothing will seem to have changed although in fact the new laws are in all respects completely alien to those of the past."

When  "reform" changes things - politicians aren't above faking a tradition when necessary. The appeal to tradition is useful both to sustain a social experiment or to destroy it. Think of the phrase so many politicians are quick to tell us when they oppose opponents of the impact of their experiments, "That's not what America is about."

Waldo is about the forrest, faces tell the story of the trees.
Posted by Ted at 2:45 PM