Once I read a guy who wrote, "We regard politicians as self-interested opportunists and nothing else."

At 7am noises began for the 10am event. Sanders fans began swirling onto Musser Park's quadrangle.  The media likes contention. But most political gatherings in the U.S. are filled with happy, enthusiastic people which dials down chances for unpleasant, click-bait, stuff. So the average rally doesn't get much coverage. See this fella below? He came to hear Bernie Sanders, but happily waggled a Jess King lawn sign at me. That's the deal, Sanders is the headliner and opening act, the local Democrat candidate follows up as the main event. Point is that the campaign trail for every candidate is lined with believers and audiences who love a parade. Regardless, the price is right and most folks are in a great mood. 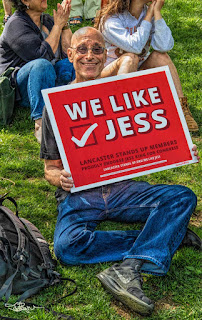 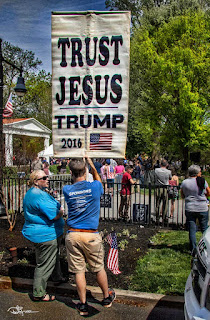 Along the edge of the crowd, a critic of the Senator and the local Congressional candidate hefted his argument into the sun. It seemed to me that the lady was in kindly debate mode. Cynics say we have lost belief in politics as a source of betterment in our lives. Believers who pack into Sanders or Trump rallies haven't lost faith in politicians' interests in their dreams.
Posted by Ted at 10:33 PM