Last Saturday May 5th, Senator Bernie Sanders, a previous Democrat Socialist candidate for President of the U.S., arrived in Lancaster to endorse a local Democrat candidate, Jess King, for Congress. Some 2,800+ Sanders' followers joined him in Musser Park which is about 500' from my home. With press credentials hanging about my neck I did street photography of the crowd. It was a warm sunny Spring afternoon with the audience in a happy mood. Here's the first of those portraits. 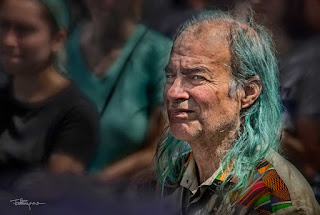 Geek Stuff: Agfachrome slide film presented my favorite color palette. Thanks to Alien Skin's Exposure X3, I can approximate both that palette and its grain structure. Of course my Canon EFS 70-300mm f/4-5.6 IS USM Lens was easily hand held on a Canon 7D MrkII producing needle sharp images. I guess I was, on average, about 50' from subjects - but I made no effort to hide: The park crawled with press photographers.

Incidentally: I estimated the crowd's size at 2,800 by breaking the lead pano in this post above into 21 quadrants and meticulously counting the people in each. I then similarly analyzed two other panos I shot from different angles - angles which revealed the additional numbers to the left and right of the pano atop this posting.

BTW, Lancaster has about 55,000 residents and Lancaster County (where few homes are more than 45 minutes from Musser Park).