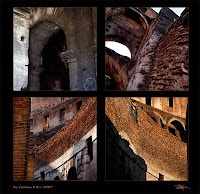 Okay, let me unsnarl all of that with an example. These images come from The Roman Coliseum. The thing’s a weighty devil. Look at its intricacy. Over two thousand years ago this complex thing was erected with such precision that what you see here still stands as firm as a mountain. Heavy construction like this is common now. We see similar ruins of buildings all around that were built in the last couple of hundred years.

Those seem to come from ideas you can see up there in those images. The reason that we can build what we’ve got are the child of that Coliseum, right? Um, not so fast. We’re left with a couple of questions before we can make that leap.

First, where’s the proof that the information about construction and design was passed along over those thousands of years. Did our contractors look at the Coliseum and magically understand how to replicate something that massive, that complicated and huge? Which makes you wonder if the Coliseum’s creators somehow created our modern buildings or whether something else happened?

See, I agree that our modern buildings have a reason, and that the Coliseum has a reason. But did the things that caused the Coliseum cause what we build? Or was the line of communication savagely and irredeemably disrupted by the Dark Ages?

And what the heck caused people to build the Coliseum without ever seeing anything like it? While it’s easy to conclude that the reason we have our modern Coliseums was that big pile of attractive rubble in my pictures. After all they sure look similar, huh?

But… but… but… Did we have to relearn everything needed to do it? Where’s that learning come from? Where’d it come from originally?

Hmmmm… it seems to me that this Coliseum and ours might have a reason. And it might be the same one. But it’s not clear that Roman building was the reason for ours.

Always amazing how architecture of the past holds up compared to many of todays buildings. We see old homes and barns with amazing character being ripped down and matchbox homes slapped up in their place so I suppose your on the right track with these questions you ponder. I love the detail in old buildings and many new ones as well.