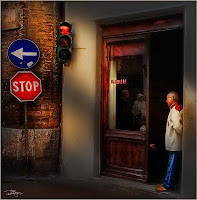 <- Click here
Agfachrome was my favorite slide film. I liked the drama of its reds and the way it cranked up the intensity of its palette. There seemed to be the subtlest kiss of gold in the whites and it always processed about a quarter stop under, giving it overtones of shadowy romantic mystery.

Is it still available? Doesn't matter to me now, I'll never return to film. But just as memories of early rock will influence the way I hear music to always, say, set me hunting for the interplay of the bass drum and the electric bass. So will the memory of what Agfachrome could capture set me searching to capture its memories and feelings in my current photography.

So here I've lathered that Agfa nostalgia atop of one of photography's debates. When we make our images, do we express reality or distort it? Attack it? One thing's clear though - we certainly diddle with reality when we filter it through our imagination. I guess that's why Ansel Adams always insisted that we don't take photographs... we make them.

----
My object here: When I saw this barber on a break in his doorway, I imagined him on the set of an Italian opera. I'm told many were set on these streets of Rome, so it seemed as if stage lighting should spot the barber and enough of his surroundings to clearly place him in an ancient, yet modern place. And it was this theatrical sense of place which I wanted to present to you. So? How my doing?

WHAT'S ODD ABOUT THE ROMAN STOP SIGNS? Look at it carefully. Now it's an Italian sign so... Why the heck is it in English? They all are! Both in shape,color, and words - they are identical to American signs. Know why? Lemme know.
Posted by Ted at 7:48 PM

Just to point your camera or to visualize the scene for a painting is to interact with the surroundings. What is cut out has been deemed un-important to the message. So I guess we distort reality by making those choices. We separate it from its family, and it passes by quickly so we can never visit it again. Our freeze frame of time captured in a bottle allows us to remember feelings and emotions but, we have long ago let it pass us by. Every manipulation I make is intended to convey more clearly my interpretation of reality. Some succeed, some don’t. Your choice of film substrate, the paper we print on, inks we choose, monitor calibration all alter the truth. Are we in it to document reality or to convey a larger meaning? So, does it matter if reality is changed if we can not prevent it from happening? It is our motive to change reality that must be examined. No tolerance for documentaries, small tolerance for snapshots and large tolerances for artwork. Huuummm. Can you relive that Agfa moment?

Editorial note: I sometimes am amazed to watch the evening news to see a foreign country protest the US using signs in English! Who is the message for? Another Kodak moment.