Passing the salt, my wife Rita curiously said, "I'd kinda' like to see Morocco."

Dishes clanked midst a gaggle of conversations that 2019 April night at Funk's Restaurant in Leola. We ate with Gib and Marti Armstrong.

"I can do that, and how about we add some Paris days at the end?" Gib, our amateur travel hobbiest grinned, "When?"

Come August we'd enlisted 8 couples into a GateOne tour set to fly from JFK...  (Oh... click on any image to expand the thing, K?) 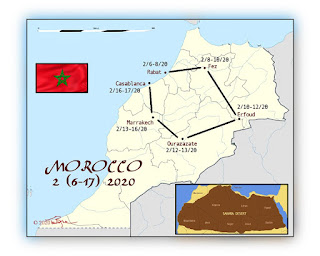 Now, 14 days back in Lancaster...  Here are some, well, questions - yeah, that's what these images are. Sparks for sudden stories about the Berber/Arab Kingdom and its 36 million people ruled now from 4 royal cities (Rabat, Fez, Marrakech, and Casablanca) by Mohammed VI and an elected parliament.

Look: what happening here is NEITHER a travelogue nor a documentary. Nope, just a collection of share-able feelings. Wanna know facts? That's what Wikipedia does. Instead let's start here... Because, well duh.. that's where we started...


Once the Western edge of Rome's African bread-basket the country blended into a Berber/Arab culture beginning in 788 and continued to serve (much as Turkey does in the West) as an overland causeway between Europe and everywhere else. So it's strewn with fragments of ancient diaspora. Curiously primal-rubble includes some of the world's richest fossil fields: Which mingles traces of geological ages and cultures. Also, like Turkey (well until recently), the nation's Muslim culture is a somewhat more secular one of accommodation with its neighbors north of the Gibraltar Straight. They sell whiskey.

But in this "Cold country with a warm sun" - people aren't European or Middle Eastern nor like other African places I've visited. Uh-uh...

Many places fly flags... Yeah, Moroccan's do that. but proudly everywhere there are images of Muhammed VI. It's complicated, huh?

Think at me...  Art communicates symbolically. I've found short stories resonate in Moroccan moments like these. Do they spark your feelings? How?