Within the Hagia Sophia 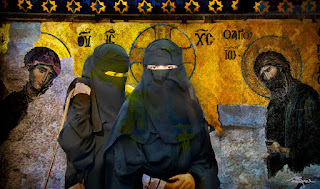 Hand held in front of recovered early Christian artwork (6th century) under reclamation on the ancient cathedral’s walls. Um…. full disclosure… Every element in this image was in the Hagia Sophia on that afternoon. However the arrangement has been, um, enhanced :→

Tugging this concept together it occurred to me to wonder whether discovery can be substituted for creativity? Or for that matter, is process the same thing as artistry? I've asked many artist this same question, "What percentage of any final work did you discover during the process?" the average of the responses is about 85%! Hmmmm.... is art merely discovered rather than imagined? Perhaps illustration is the only true form of artistry since an illustrator's gotta' begin with an idea that s/he then imagines into finality?
And yet, illustrators are not highly regarded by fine artists. Weeeeerd!

Perhaps, imagination is merely a device used by art to manipulate its tool, the artist, to bring itself into existence.
I think it would be fair to say that all art is imagined into finality, that seems obvious. If what you are asking is: Is the final work known from the start or is it 'discovered', as you say, along the way; then I would suggest that it does not matter. The source remains the same, as mysterious as it is, and I would say that our brains have as much chance of figuring it out as our eyes have of seeing the colour of sound.
Your picture, by the way, is just wow! Absolutely perfect juxtaposition, extremely telling in its composition.

Many believe in the "Mozart Effect"... that the artists takes dictation from God and that any deletion or addition to the original concept causes the entire thing to conflate. Genius then is packaged in the conception which is merely iterated through any pre or post processing. Mozarters seem to believe that any elements of luck or serendipity dilutes an artist's claim to genius. To these folks, inspiration comes but once per image, and the is before s/he approaches a palette, canvas, or camera trigger. Yes some enhancement may occur to take into regard the limitations of craft, but only to enhance the original concept.

I'm totally happy that you find this image resonates. Thanks.

I thought the Mozart Effect had to do with the theory that listening to Mozart's music improves reasoning abilities. In any case, I don't know anything about God or gods and not being an artist myself, I can only speculate on the source of art or creativity. In my experience, limited as it is in the great scheme of things, I have found that with true creative genius, the claims to genius are never made by the artists themselves but rather, by their audience.