There are 42 million Ugandans 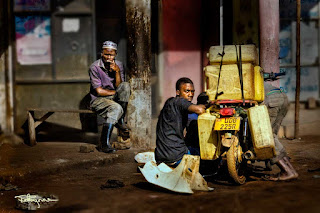 There are 165 million people in Central Africa, 42 million of them live in Uganda. Along that country’s southern E/W highway, here are 3. They tell a story?

Is there such a thing as "ethnic geneolgy" or is that too Lamarkian? Wait... Lamark was a Russian geneticist/philosopher I think, who claimed that ideas, memories, and attitudes could be stored in the genes and hence reproduced among generations When his attempts to prove that failed, Stalin killed him.

As I walked about, these guys repairing their water-bike* showed less than welcoming looks to a European guy with a pricey camera, boots and ... probably... attitude. Remember, Uganda was a British Colony and remains part of the British Commonwealth of Nations. English is one of their three official languages. All of the signage is in English. White folk are not exotics to them, although perhaps maybe we are in this tiny widening of the road deep in equatorial Africa.

I'm an atheist regarding "ethnic genealogy", but not cultural legacy. Moreover most homes sport satellite dishes that grab Hollywood and US TV. So, for example, Oprah and The Rock are both celebrities in Uganda. So those looks... are they windows into what?


*Clean water's a valuable commodity in much of Uganda where people travel long distances daily to government wells to provide for their families. Most do that on foot (mainly women),lining the roads as they balance those yellow tanks on their heads. Fellas like this make their livelihood carting as many jugs as possible on scooters to homes or businesses that can afford their service.
Posted by Ted at 1:09 PM

Interesting commentary aligned to an equally engaging picture. You do have a knack for capturing people. I cannot say much on the subject of "ethnic genealogy" but I have long thought that memories might be stored in DNA and there are some studies only just beginning to emerge that seem to suggest that this might be the case. This could perhaps explain young prodigies and even memories of "past lives" some people claim to have. Maybe that would also explain how birds know how to build nests without ever being shown.
Makes for interesting contemplation at the very least :)

Lamarckism (or Lamarckian inheritance named for its inventor Jean Baptise Lamark, according to Wikipedia is the hypothesis that an organism can pass on characteristics that it has acquired through use or disuse during its lifetime to its offspring. It is also known as the inheritance of acquired characteristics or soft inheritance.

You will probably find reading about Lamark and his encouragement then assassination by Uncle Joe Stalin a fascinating study Cedric. Unfortunately, rigorous scientific analysis showed it to be an un-reproducable exercise. I think that cultural rulebooks are a far better method of nurture complimenting nature. To be sure there are instinctual 'memories' that appear to be transmitted over time. And there also seem to be instinctual devices which strongly influence culture such that anthropologists have found certain collective human behaviors (Thous shalt not kill for example) which seem included in some form within almost all studied cultures regardless of how remote. Similarity in social behaviors have been found in historically separated animal species.

However to hope that a mystical core exists within us all which, given sufficient meditation skills, might lead us all to some utopian enlightenment are more romantically aspirational than reproducibly achievable. Hence my Lamarkian atheism. Still, like many dreams, it would be nice.

I will admit however, that a demon seed does seem to emerge tragically among many otherwise 'normal' families that abruptly produce offspring that are irretrievably evil. Perhaps this is some - unpleasant - evidence that some traits cling to a recessive gene. If so, well, Brrrrrrr. :-)

I'm glad you found this image resonated. I began photographically as a photojournalist and was trained in story telling through attempting to discover the human decisive moment. I luvvit still!

Oh my, I certainly do not subscribe to what I like to call magical thinking, either. The research I was referring to doesn't aspire to go down any "mystical" path or anything so esoteric. Lamarck, as you point out, proposed the inheritance of acquired characteristics, but as far as I know, he did not suggest that this would be in the form of memories, i.e. data that can be processed by the brain. But I confess to very limited knowledge of the man or his research, so...
What I was referring to was simply to do with memories. It is being suggested in some areas that memories, which are thought to be stored in the brain, may in fact also be stored in DNA. As I understand it, it is suggested that the brain has the capacity to "read" such packets of information and that such information is able to be passed on genetically since it becomes part of a cell's structure. I suspect there are probably some counter points to this type of theory and of course, I am not suggesting that I place any kind of belief in this, merely that I find the idea of our brains being able to recall ancestral memories stored in our cells to be rather fun.
By the way, what makes you think that Lamarck was assassinated by Stalin? He died in 1829 in Paris, some years before Stalin was born. Are we each talking about different men?

Ouch! You write, quite correctly…

“By the way, what makes you think that Lamarck was assassinated by Stalin? He died in 1829 in Paris, some years before Stalin was born. Are we each talking about different men?”

Sigh… As I age my memory sports intriguing farrago pools through which I occasionally tramp about like a kid in goulashes after a storm. In this case I splashed up two weird recollections each a distortion re. what I was intending to write. Let me clear them up (he says blushing)…

(1) Jean-Baptiste Pierre Antoine Lamarck de Monet was a French botanist/biologist who lived from 1744 through 1829 and nowhere overlapped the life of Joseph Stalin. He was, as I ‘splained in my note to you above, an initiator and popularizer of the concept that organisms may pass along their memories biologically (nature) to their progeny. The hypothesis is called Lamarkism.

However, as a result of my mental/muddle he was not the man of whom I was referring - who is instead Trofim Lysenko a Russian botanist/biologist who lived from 1898 through 1973 and who unquestionably falsified his research in the Soviet Union to develop Larmkianism into what became know as Lysenkoism. It was his assertions which Stalin exploited to eradicate many of the children of Russian capitalists and philosophers on the Lysenkian assertion that they were born with counter-revolutionary (and latent) memories that would trigger anti-state activities. Unrelatedly he also set back Russian biology and forced the death of wide swatches of his critics who rejected his (failed) application of Larmarkism to to agriculture - and which set back agrarian production tragically during the Stalin dictatorship.

(2) While Lysenko died in shame quite a time after Stalin’s death (and at the mature age of 78) I recall a grad school economics professor suggesting that the causes of his death (which were never fully reported upon) were quite murky and he… the professor… attributed them to the curse of Stalin and quite possibly a result of actions of Uncle Joe’s advocates.

As you can see, my mind mushed each of these things into one… and I appreciate your prodding me to peel them away from one another and to admit that my memory of Stalin’s involvement in Lysenko’s death were the result of colorful speculation which has absolutely no proof. AAARGH!

It has been well established however by both botanists and biologists that Mendellian rather than Lamarkian/Lysenkian principles of genetics are reproducible while neither Lamarkian nor Lysenkian memory transference through nature as opposed to nurture have heretofore shown significant and reproducible linkage. But, science is always discovering… and perhaps modern methodologies and technologies, as you note, suggest evidence of a pulse in what appeared to be the corpses of Lysenkoism/Lamarkianism.

Perhaps I should be an agnostic, as opposed to an atheist on the subject? Hmmmm…. A last point... It's be wonderful if somewhere deep in our primitive brain stems we have memories even as far back as our early organism existence of the creation and maybe the creator's concept of life's meaning. Imagining, of course, that there was a creator.. but whoa is that a different discussion... Yipes. And doubly more wonderful if through some kind of deep meditation we could find those answers within (mysticism) as opposed to truths revealed from without (spiritualism). Me? I just bumble along accepting the revelations of experience.

BTW, I hope that everyone who visits ImageFiction might notice that my Friday, August 2 post (Patagonia 12) continues to fatten like MacWhopper addicts as I continue to post street captures of Buenos Aires. As you can see in regard to the detail in #1, there are some hot discoveries in the details of these images, at least they heatened me :-)