The Photographer/Writer/Philosopher/Publisher Brook Jensen once said, "It is not the photograph that is important, but what it says." In a book I once read Diane Michaels quoted, "We are our feelings."

And what a good photograph says is our feelings. Here's my friend Andreas Manessinger grabbed as we talked on a Viennese square and food court near to (I believe) the city's hauntingly majestic opera house. it was a HOT and sunny Wednesday August afternoon. Yep, the appropriate verb is "grabbed". 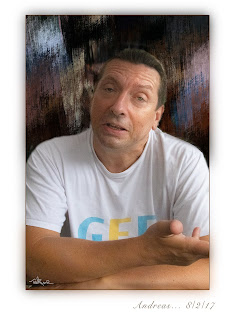 We're virtual friends who from time to time actually meet on the phone, Facetime, and twice now in actuality... real space. In a way we're old friends who met in "The Independent Eye" community's website... How long back was that? Dunno... could be (gasp) sixteen years... More? So far, both of our (actual as opposed to virtual) meets have been either in his space (Austria) or his 'neighborhood' (Europe). Once we wandered the streets of Florence, and then again when he guided me through an entire day in Vienna. You can find Andreas' photo site there on the right column. He has the talent to find meaning in things and spaces that continually provoke my imagination. They are visually stunning images yet more importantly, they are each about something.

His photographs are about something... something that is not photography.

Which is what continually feeds my appetite for photo-based-art. The photo artist passes along something much more than stunning visuals... They transcend craft to communicate feelings and thoughts - sometimes both. I often write, "Art without wonder is merely craft."

That's the foundation of my belief in this medium. It is independent of musical or sound tracks. Its texts are, unlike cinema, a high wire act. The artist is all alone without the support even of motion. Painters have done this forever. Fine art photographers are their heirs and in a lot of ways their successors. Probably Caravaggio in the late 1500s became the first liberal, crusading photo journalist. And painters owned that profession until in the 1880s Thomas Wedgewood figured out the chemistry and Fox Talbot a couple of decades later tweaked it to make photographed images durable. Developments which led photographers to kidnap photojournalism.

Fine artists were slow to give up their claims until the only markets left to them were in the increasingly abstract transmission of formed feelings. A market that's slowly shifting to photo based artists.

Ansel Adams often said, "There's nothing worse than a sharp photograph of a fuzzy concept." Andreas talent allows him to make laser fine images that cause me to imagine the ideas he presents in extraordinary detail. He sees artistically and has such control over high craft that he communicates right to my feelings. His work triggers that wonder I mentioned above in forms, shapes, palette and points of view that are as uniquely his as, well as were Caravaggio's.

Which brings me to the portrait up there. Portraiture's got to more than describe a moment. It should frame the artist's narrative so the viewer senses a storyline. Look at Andreas... is that not the image of a deeply thoughtful man caught in a serious moment? It's so generous of him to allow me to post this picture. Of course I cannot tell you what to see in this captured moment... But I hope it makes you wonder about its subject's back story.

There's little more an artist can do because... "It is not the photograph that is important, but what it says."

GEEK STUFF: My usual combo of Canon 7D and its EF-S 17-85mm lens. The light was harsh - crazy contrasty - so I had to wrestle it into shape with PSCC 2019. Oh, and the background was disturbingly busy and in that light - well the depth of field went on forever. So I had to use a technique I'm experimenting with to kick away all of the people, buildings, and vehicles dancing about behind Andreas. Frequently I don't do that in street portraits... making the sense of place part of the story arc. This time they contributed nothing to the moment and the actions of an intelligent man making a serious point. I want to communicate Andreas's perception and charm. Which meant cropping and ordering away the environmental competition.

It's a simple grab shot, right?