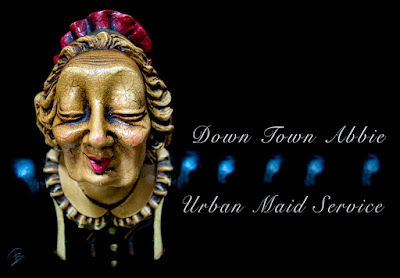 No drama Annie cleans up!

Geek Stuff: Found paper mâché Abbie a dozen years ago and snagged her with my Canon 40D. Lancaster County's home to a score of high-end antique outlets. Dealers and buyers come to Adamstown to  pick stuff for chi-chi city galleries. Estates from all over the northeastern slice of the U.S. consign goodies to weekly auctions. Sometimes I go to photo-bag characters like Abbie along with toys, jewels, and gee-gaws for my inventory of augments.

Abbie's sellers boasted her resemblance to a well-known monarch. Me? I don't see it. But then, the U.S. doesn't do Royals. Regardless, it struck me that this gal'd make terrific business cards, posters, and other ad gear for a trendy business.

Downton Abbey wasn't aimed at me, but lots of others, particularly ladies, are delighted with the TV series and movie. So  I'm thinking that Down Town Abbie'll have explosive name recognition, huh?

Anybody wanna buy their very own franchise?