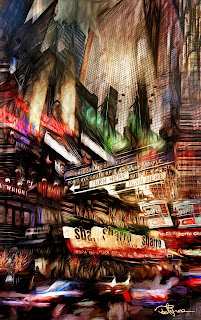 Tuesday, Manhattan,10:20 pm. Who cares?
I'm over it. Yeah, the place throbs hot 24/7. So do a lot of cities. But frankly NYC's showing darkening age lines. Much of the skyline's a backdrop for Rhapsody in Blue. Gershwin imagined that haunting piece in 1924.
The British novelist L.P. Hartley wrote, "The past is a foreign country, they do things differently there."
New York's like that - a visit to the 20s. Not as high as other cities anymore... neither in buildings nor creativity. It's not as clean as other places... neither in in streets nor imagination. It's a city of scuffed shoes, frayed collars, cheap-suited-babble, and crumbling pretensions. A narrative about hardscrapple romantics held up between bookends of homeless and trust bunnies.
They do things differently there, but unless you squinch your eyes and imagine the clarinet glissando into Gershwin's plaintive rhapsody... New York throbs not so much with excitement but more like the paper thin skin that tops a throbbing-fat boil.
It's old news.

Wow, what a furious explosion of color and shape! I really wonder what your source images looked like :)

The image Andreas is a very logical extension of the furious corner of this intersection that's continually crammed with vehicles smooshed together from a variety of arteries and seeking new ones as they spar to cross town. Spar's a good word to describe New York drivers... or most New Yorkers for that matter who have each been bred to believe that every moment is about only them. Walking and driving through the background stink of the exhaust and debris of the city are both blood sports. Remember that a "New York Minute" is defined as the infinitely short time span between a traffic light going green and the first horn getting blared.