We boarded our Teeming River Cruises river boat on Friday, July 21. Ahead, a 12 day journey from Amsterdam, up and down rivers to Budapest. The Royal Crown carries just 90 passengers, and left Amsterdam at around 2:10 pm on Saturday with 89. Now why was that? 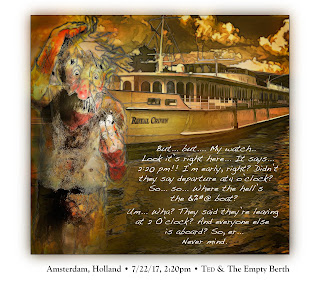 Later I learned that Captain Hans de Gelder delayed leaving for a full 10 minutes beyond his scheduled 2pm departure. But the rules of the river, berthing, and crew assignments meant moving off even though a search for one missing passenger turned up nothing. Before disembarking they'd even called the Amsterdam police to see if the tardy guy was hurt, or perhaps hospitalized. Seems he left the boat around ten that morning to, "Wander around my favorite city."
Yeah, it was me. Without European cell service my iPhone, away from WiFi, was useless. Stupidly certain that the boat was leaving at 4, I contentedly snaped pix until about 1:55 when I decided to go back even though 4 was still way off. But the day grew hot, the mid-day lighting grew awful, and crowds were everywhere thick as July humidity.

Imagine my surprise approaching the slip when, well, there wasn't a boat! 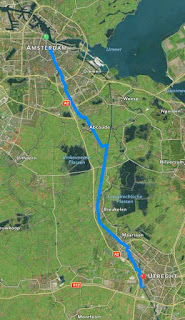 At about 2:20 an empty Teeming Rivers slip adjoined Viking Cruise berths where greeters awaited their passengers. So I walked over and met a happy Irish fella in charge. Teeming River equips all of their disembarking passengers with identification cards that carry their boats' telephone numbers. The Viking guy got right on it. He sent me inside to relax, called the boat, and arranged a reasonable limousine service to meet the boat at a place called Roosseveltlaan, in Utrecht some  24 miles and 40 minutes away. My driver in a sparkling new Mercedes town-car described landmarks along the way. The Royal Crown's  captain detoured through a residential neighborhood's canal about twenty miles beyond Amsterdam. There the driver and I, along with a gaggle of curious neighbors, stood waiting (as a light drizzle fell) on this X for the Royal Crowne to poke its nose under that lovely bridge up there in the distance. 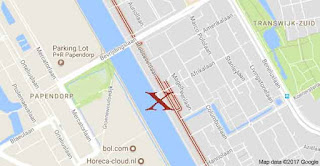 And, after about 20 minutes, it did poke under. But, as you can see from the picture here on the left, this was not a dock with no provisions for gangways or ladders. Instead the boat almost stopped, a guy grabbed my camera, while two other BIG fellas snatched either of my arms and flipped me like a cod onto the boat's deck. FWOOOP! As 89 passengers and a bunch of crew laughed and cheered, I became a celebrity. From that moment on, the crew and a lot of the passengers helpfully reminded me of departure times at each stop.

BUT: The toughest part of all of this wasn't mine. Nope, my poor wife Rita was so worried. As the minutes ticked toward departure, her anxiety blossomed. Our reunion was tender yet, what is the exact word? Judgemental? Yeah, you remember that financer-guy Bernie Madoff? Well I know how Bernie felt. Fortunately I'm married to saint.