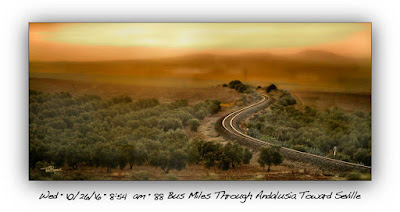 So sunrise burnt away valley mists that coated a rare non-electric rail track wriggling through orange groves toward Northeastern mountains.
There are 88 bus miles stretching from Cordoba and Seville along the Andalusian plain. Andalusia includes Gibralter (Spain doesn’t recognize Britain’s claim to that rock), This plain is as much Europe’s Eastern entrance as Turkey is in the West.
Consequently beyond the bus windows is a plain that’s been swept in historic times by the native Iberians, Phoenicians, Carthaginians, Greeks, Romans, Vandals, Visigoths, Byzantines, Jews, Romani, myriad Africans, and Muslim Moors, along with the Castilian and other Christian North Iberian nationalities who conquered and settled the area in the latter phases of the Reconquista.
This far south, road signs are frequently written in both Spanish and arabic.