Rocco Has Left The Building

My buddy Rocco was born May 5, 2004. Last May the vets found a mass growing in his left chest and recommended it be reviewed in August. He began coughing last Monday which got him a trip to the doctor.

Comparing new x-rays with this from May... The doctors seemed startled that he was still alive! They gave him maybe a week to live and suggested I quickly consider euthanasia.

Words escaped Rita and I.  Doggies, like Autumn, lack a happy ending. But both are so richly wonderful...

Rocky's Autumn's ended Friday. But at least until last weekend he was virtually symptom free. We walked every day since Spring... He picked our routes around Lancaster, always winding to our doorstep... He was  a great little city guy - my best buddy.

Rocky was a Lhassa Apso, 25 pounds of furry affection.
I'm remembering when he' d first moved in, a tiny visitor then but already guarding his very favorite place at the foot of the bed. He was about twelve pounds and glad to escape the farm where he was surrounded by sisters who stole his food. It took months till he realized that meals were his, and that he could graze leisurely, usually eating half at dinner time, and finishing each night before bedtime. 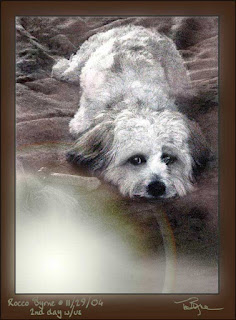 Last Sunday was the first time he passed on his second course of food before bed. Monday he stopped eating his goodies. And then completely stopped eating. 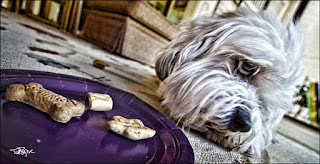 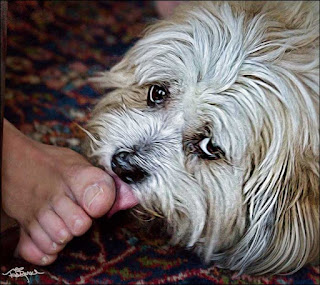 Monday the doctor wondered if I thought it was time to end his dis-comfort. But Rita's just had her knee replaced and she's recovering from that pain. When I left with Rocco last Monday morning, we both believed he'd merely gotten something stuck in his throat - the first symptom of anything unusual. No way I could go home without our guy. And while he coughed some, his spirits seemed normal so I had to bring our buddy home to say goodbye. Which we did until Friday morning... August 14th at 11.

Putting a dog down... When they live to trust us and will trust us even as their little eyes cloud and close for a last sleep is: Well, I've been there before with my doggie friends. As the doctor's administered the drug, I've asked, "Give me your paw..." And we've held on... held on... And Friday I asked  Rocco for his paw, and I got it with all of his trust as he closed his eyes and cuddled to his final rest... closely in my arms. 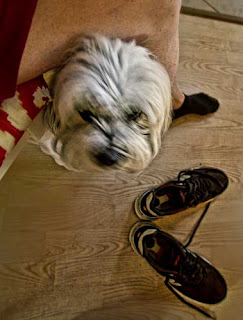 DAMN THIS IS MAUDLIN!!! Yeah, Rocco's just a dog. But Damn It! If there ain't dogs there... IT AIN"T HEAVEN. I want him to live. He couldn't and I could see the puzzle in his slowly closing eyes...To get the sleep that evaded him as his chest obstruction caused his breathing to grow labored.

He knew, even as he drifted off that I wanted something, but he couldn't figure out how to give it to me. That's what dogs do, they give. You know what? I hope I gave him just a tiny bit of what his eleven years added to our lives. 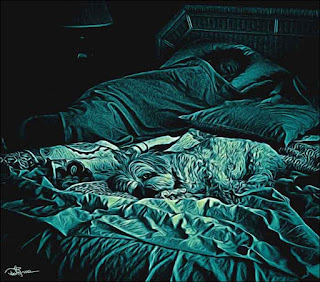 Rocco's left the building, at least physically. But he's still all around the house. I just can't seem to find him. 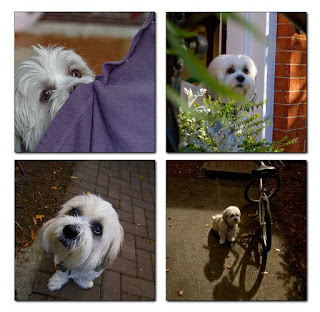 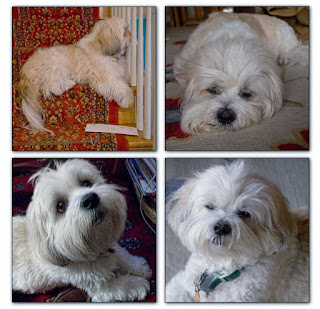 Last May we visited Hilton Head over the Memorial Day weekend. Our little city fella liked adventures that left him off the leash to sit on the back step and peer into the early morning glow. Maybe he saw the rainbow bridge where furry friends wait, tails thumping, for us to join them? Maybe... Maybe Rocco, that thing newly growing in his breast last Spring, understood that he was older than his years. Older than me in relation to the end? Maybe. And when I think of Rocky - perhaps waiting up there on his glowing bridge -  and its much that I do for the moment... It's a nice maybe, huh?

I've been there myself and I am truly sorry to hear this news Ted. You've got some beautiful photos to remember him by. I especially like the last one, the two of you together.

Thanks Cedric. It seems to me that moments of grief and moments of joy are a lot like the experience of experiencing art... They all short circuit access to vocabulary. Words fail, huh?

He was my buddy Cedric. He tolerated ladies, but he had to be with the guys. HOWVER, if you know a young bachelor who wants to maximize his inventory of female contacts... A Lhassa is a major chick magnet :-) Women of all ages ran to Rocco.

"Words fail"… ain't that the truth.

I'm just catching up on your posts and wanted to express my sorrow for your loss. Judging from his photos he must've been a helluva guy.

Thanks One... I mIss all of my doggies. Each was special, Rocco was a bundle of love. Thanks for your support.