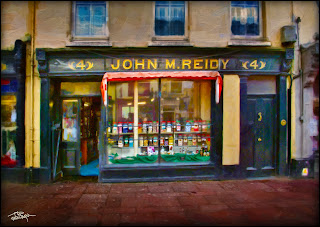 I live in America's Amish country. The old order has largely stopped its technological clock somewhere in the middle of the 19th century. The towns of Ireland, I've found, have stopped their urban  street clocks somewhere in the late 1930s or pre-war 40s. So much seems as familiar as nostalgia. Here on Killarney's Market street's a powerful example... Look at the candies in the crystal jars. Can you read the flavors? These are the penny-sticks lurking almost beyond memory of most of us today. Killarney, like most of Ireland's small cities, is a well-crafted memory.