Yipes, Andreas just reminded me ... well actually noted, I had no idea... with a post on September 10th, that ImageFiction is a year old! And with few exceptions, you and I have "enjoyed" daily postings since then! Holy Moley! 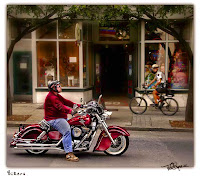 On September 10th of 2006 I posted this image. It was about POWER. I looked at these guys and tried to figure out who had the edge. The foreground fella sits on a monstrous hog. He's burley, strong. The skinny guy in the background's got a paltry bicycle. And yet... With all the horsepower between the big guy's legs... When it comes to figuring out who's got the power remember this... That man in the back wears a gun.

I still love this image and it developed as a result of your input. Some of you were disturbed by a distraction in the upper left hand corner. Oh, don't look for it now... As a result of your emails (and most of our interaction is sill email, I haven't figured that one out...), I covered the sign.

Here on the first birthday of this blog, let me give away a secret. See that tree on the right that forms half of a graceful arch around the actors in this scene? Okay, now look at its twin on the left. See how it reflects in the windows behind it? Look carefully... very carefully.

They say the best work happens when no one notices. I think that happens here, and I'm quite proud of it. What I did was to take the tree on the right and move it also to the left. And I hope until now you didn't notice. Instead I hope you enjoyed the exquisite detail on that foreground bike and the super subtle smirk on the biker's face. I hope you enjoyed the motion blur around the policeman. Yep, I enjoyed working them all into just the right mixture to make my point.

After a year, "Power" still works, don't you think? Hope so... happy anniversary to us all.

We're off to Rome this weekend, then to Florence. I won't be back into this studio until October 15th. Oh there will be folks playing about here as they move into our home to dog-sit with Rocco and enjoy living for a couple of weeks in downtown Lancaster. I'm told that there're plenty of opportunities to grab some WiFi in those parts of Italy. And I'm reeeely excited that I'll get to meet Andreas Manessinger in Florence. Well, not really meet him, Andreas has become a good friend even though we've never seen one another face-to-face, but on October 6th we'll finally get to share some adult beverages together and talk about the state of humankind into the night in Florence (what better place to become enlightened?). If you'll be in that neighborhood - drop an email to one or the other of us. We could all party.

But, this also means that after a year of almost daily postings, this may be the last until the middle of October. I hope you won't forget to check in from time to time. And use the comments line here ... let everyone get to know you. Maybe, somewhere we'll all get to share those adult beverages together and settle the state of the human condition. Or at least laugh and smile... and see what each of us look like as we do it.

A year of daily postings just blows my mind. I don't know how you guys do it... or even manage to get close! It's an awesome feat, and I am in awe.

Travel to a foreign land, though, at least any of those where you must traverse a large body of water, has me even more bewildered. The circle of my travel has always been rather small, but it is widening. Slowly. Even my daughter has had the opportunity to travel abroad not once, but twice. One day I hope to do the same.

The crux of this biscuit is that I am envious. Especially since I'm still having so much trouble digesting my own little stateside adventure, and find that I am already trying to figure out how to get away again.

Travel is a mean bug. It bit me hard during the first days with physical ailments of all sorts. Aches and assorted pains, stuffy head, and a mother lover of a headache that did not let up significantly for a a good 48 hours. I suspect it was largely the altitude change.

But then, once all that passed and I began to get accustomed to the desert... what a high.

Best of luck, and I hope your trip is filled with more of the highs than lows.

Oh, and say hello to Andreas for me, would ya?

Ted,
This image is really cool. Congratulations on one year of posting!

I like this image and yes, it fooled me too. I did not even notice the "twin" trees until you brought it up. Good job at completing the effect by giving the left tree a reflection in the window. It's in the little details that make things like this work.

I believed the motion blur on the bicycle guy too. I like the artsy effect on the motorcycle also, looks beautiful.

I really appreciate what you had to say about my "Night of Joy" series of images and commentary. It sounds like you really took it all in and enjoyed it like I hoped people would. Thank you for that.

Have fun with your fellow blogging friend in Rome! That sounds like an awesome trip for sure!!!

If you're ever down here in sunny central Florida, you know you're always welcome to contact me so we can go photograph something. I'll be your tour guide.

(Michael Mc) Yeah... travel to an international place (foreign is a banned word by the PC crowd... heh heh heh - I wonder what happens when they get an "international" object in their eye? But I digress)... We are leaving from Philly (clearly a foreign place to many) and jetting directly to Rome. I think the flight's about six hours. Hope my MacBookPro batteries hold up, I've got some kick-a DVDs. With luck there might be a power socket by the seat.

Rome... it's a word with such a magical ring. I've got a bizarre interest in the engineering of antiquities. How did the ancient Romans handle sewage? Water? Electricity? Cable TV? Inquiring minds want to know.

(Chad)... I think you are right... so much of what we judge to be authentic happens in the details. They are worth sweating. As for your site... my comments were self explanatory. Hope you get a bazillion visitors when we are away.

Ted, you're either there in Rome or in the air winging there by this time. But I'll leave my note anyway. Remember, when you're in Rome, do as the Romans do, LOL.

I've flown over Italy - and darned if it didn't look just like it does on the maps! I was amazed that Mother Nature/Earth/Gaia actually can read our maps. But the Alps were disappointing, tho - mere foothills from that altitude.

Power, yes, that image really works, even after a year, even after a lifetime. I noticed the the two trees were "twins" but didn't think to look in the window, lol. Great, but subtle work.

I love the blur on the policeman's bike and how you left him in sharp focus. I also love the ringing of blur around the edges. Very effective - helps the eye go right to the 2 subjects.

I hope you'll give Andreas a few hugs for all of us at the RV. I look forward to both your photos of your Italy trip :-)

Happy 1st Anniversary, Ted! This blog is so well done in so many ways that I just assumed it had been around for years.

Your post with this photo illustrates the dilemma we "manipulators" often face. Do we share all our secrets and reveal all the changes and improvements we made? Or do we just let the finished image stand on its own two feet and leave the viewer to enjoy and wonder. Sometimes I share; sometimes I keep quiet. Sometimes I can't decide.

Enjoy your trip to Italy. We look forward to seeing your unique vision of that beautiful land.

Such a cute image boys and their toys ! I think it is a wonderful image. Congrats on one year of posting as well ! I enjoy watching your body of work grow and just seeing things thru your eyes.

Came here from Online Photographer.A comment on the photo of the two dudes on two wheelers.To me there is no comparo in who has the power .It is the officer and the police force backing him up.The dude on the motorcycle looks to be riding a Kawasaki done in the Indian style a model they made for a few years awhile back.Hog owners might take exception to that.I'm laughing because he's wearing running shoes other than that a nice piece of photo work.good on ya.c.j.g. of eroticalee

Nice to have chatted with you Sunday. Of course the Harley picture would be my favorite....Not to worldly in the art world circle. Hope you get a chance to visit Clara, PA again.
Cheryl Bryant