Touched By A Ten Foot Pole 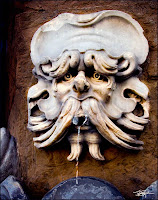 <- Click here
Reality, um, sucks. An artist has no use for the stuff. Or better yet, art is what happens after the artist gets through diddling with reality. See the name of this blogsite up there? See the "Fiction" part?

As some of you know I'm in a caged-bash-match with the Organic Photographers. Those guys figure that every image should look precisely the way they saw it through the range finder. As world renowned photographer Craig Tanner's made clear on his blogsite (see Point #7)... If you want to make a living as a commercial photographer today, you'd better master PhotoShop since the clients don't want reality, they want their idea of perfection. THEIR IDEA....

Or as LensWork editor Brooks Jennson argues, we never demand that musical composers imitate reality. How would they do it? If music had to sound exactly like nature, every clarinet would sound like a nightingale. Every piano would have keys to reproduce the growl of an ugly motorcycle muffler. You ever heard birds singing the Ave Maria? Wild One? I Wanna Hold Your Hand? Stairway To Heaven? Dude Looks Like A Lady? Or anything by Britney Spears?

The fountain I found in Florence last October has sat on its street corner for some four or five hundred years. I liked his face. I didn't like the tourists trooping past, the scooters gassing his eyes, or the general din of rush hour. They were there, but now they are not.

Yesterday I posted a girl sitting in a doorway that was slashed by a pole. Originally I kept the pole as a compositional device. Lots of people didn't like it. I tried another take with it removed. Usually I care a bunch what other people like about my stuff... But while it may influence future efforts I rarely change an existing effort. But iit sounded interesting to see the pole-less result. Afterward, others, seeing the pole gone felt nostalgic for the "reality" of the pole image. What I really wanted to do was get folks interested in the story behind the girl in the doorway.

But she got touched by a ten foot pole.

I think the pole won, the girl's story lost. And today I've posted another highly stylized take upon reality which is: image fiction.

Is there a moral to this story? Hmmmmm?
Posted by Ted at 4:10 PM

I prefer the version of yesterday's photo with the pole, but I don't consider removing it a crime against reality (whatever that is).

I appreciate your efforts to educate the "purists", Ted, but you can't teach people who aren't interested in learning. Their minds are made up on this issue, and personally, I've given up caring whether or not they ever change.

mmm I musta missed something coming down at RV..hmmmm>>>> I will land later and catch up on this little thanggggg. Just do what you do man I do not know why there is such a struggle with how artist practice their crafts... we are all different that is what makes ART ART isn't it. Besides I love learning new things and hope I never grow to afraid to try new things and Craig is spot on!!!!

It's interesting: as much as I dislike French baroque, as much do I like the Italian variant. Ted, when you come to Italy next time (and you will, I'm sure), you have to visit Venice and see the baroque tombs in Santi Giovanni e Paolo. That's baroque! All the splendor from Monteverdi to Tiepolo set in stone. You'll love it.